2021: The Royal Rumble comes to Thunderdome, one Rumble match is used to create a new star, the other is used to.......give an old star a win he didn't need....
The 2021 Rumble took place in front of the virtual Thunderdome crowd and was a very mixed bag of a show, par for the course with WWE circa 2021.  Both Rumbles were entertaining.  One elevated two very deserving young stars and it felt like the company's priorities were in the right place.  The other didn't elevate anyone and boasted the oldest field in Rumble history, with the average age being 39 years old and OVER HALF the field being over 40.  We got a mostly very good Last Man Standing match with a hilariously botched ending, another psychology-free Goldberg match, and a passable women's singles bout.  So not a bad show, but not one that will stand out in the Royal Rumble annals either.
The show opened, mercifully, with the Goldberg match.  I was glad to see them get this one out of the way.  It was of course the usual two-minute finisher fest.  Remember in 2003 when Goldberg actually did five or six different moves?  The two guys started before the bell, with Drew McIntyre shoving Goldberg and hitting him with a spear.  Both guys rolled out of the ring and Goldberg returned the favor, spearing Drew through the ring barricade.  They teased Drew not being able to continue, but he demanded the match be started officially.  Goldberg went for a spear but Drew hit the Claymore and covered him.  Goldberg kicked out, becoming only the second guy to do so, after Brock.  Goldberg hit a spear and jackhammer, Drew kicked out.  Drew hit another Claymore and pinned him.  Goldberg was visibly winded after roughly three minutes of activity.  Goldberg shook Drew's hand and said he passed the test.  Oh, I'm sure Drew was overwhelmingly flattered that the two-move guy now respects him...  This was fine as a dumbass finisher match, but why does the company keep doing these?  Fucking pointless.
Next up was Sasha Banks carrying Carmella through a solid women's match for the second time.  Still this wasn't bad.  Carmella's valet Reginald interfered a few times, mostly to catch Carmella as she fell out of the ring.  Late in the match Carmella hit a tope and landed on her face, an absolutely brutal-looking landing that she was lucky didn't leave a mark.  She hit a pair of superkicks but immediately fell victim to the Bank Statement and tapped.  That ending was pretty sudden.  But this match was alright. 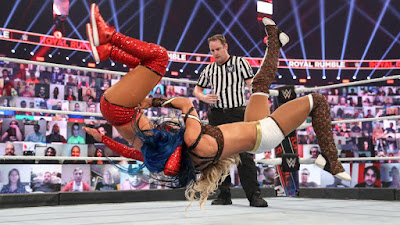 The women's Rumble match was third, and was quite a mix of athletic spots, story continuations, youthful showcases, unnecessary cameos, 24/7 dumbassery, etc.  WWE vastly overrates the idea of surprise entrants.  Yes, the crowd will pop for surprises, but a) there's no actual crowd in the Thunderdome so it doesn't work here and b) a field of great current talents is better than a field peppered with surprises from yesteryear, every single time.  Torrie Wilson does not need to be in a Royal Rumble, she wasn't even a proper wrestler back in the day, she was a valet/personality/pillow fighter.  Jillian Hall does not need to be in a Royal Rumble, she also wasn't a wrestler, nor does anyone watching today even really remember her for more than the giant growth they used to put on her face.  Victoria was the one past cameo that worked; she still looked great in the ring.  Anyway, the two big stories coming out of this were Rhea Ripley, who entered at #14 and made it all the way to the end, eliminating 7 in the process, and of course Bianca Belair, who pulled a Ric Flair, entering at #3 and winning the whole thing.  Bianca and Ripley were my two picks and it was great to see them as the final two; they had a pretty great finishing stretch where it looked like either one of them could've won it.  Bianca gave a great babyface promo afterwards, reduced to tears of joy.  She would go on to have a pretty great WrestleMania main event against Sasha Banks, while Ripley would dethrone Asuka for the other belt the next night.  Sadly by summer 2021 both women's pushes were derailed, as Bianca jobbed out to a returning Becky Lynch in 26 seconds and Ripley was dropped back to the midcard.  The women's Rumble was overall my favorite match of the night.  It wasn't the best worked, per se, but it was the most productive and had the best ending. 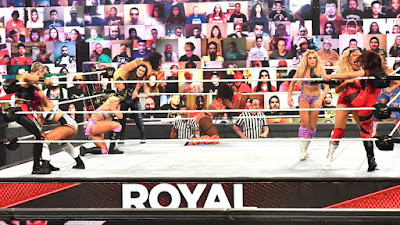 Participants: Bayley, Naomi, Bianca Belair, Billie Kaye, Shotzi Blackheart, Shayna Baszler, Toni Storm, Jillian Hall, Ruby Riott, Victoria, Peyton Royce, Santana Garrett, Liv Morgan, Rhea Ripley, Charlotte Flair, Dana Brooke, Torrie Wilson, Lacey Evans, Mickie James, Nikki Cross, Alicia Fox, Mandy Rose, Dakota Kai, Carmella, Tamina, Lana, Alexa Bliss, Ember Moon, Nia Jax, Natalya
Final Four: Bianca Belair, Rhea Ripley, Charlotte Flair, Natalya
Long Man: Bianca Belair (56:52)
What by all rights should have been Match of the Night was the Roman Reigns-Kevin Owens LMS match.  I've made it very clear how much I hate the LMS gimmick, but they subverted it a bit in this match by having both guys hit signature moves in the opening moments and get counts going.  Plus the ref counted much faster in this match than they usually do, so the momentum wasn't halted quite so dramatically each time.  Reigns and Owens brawled around ringside, up the ramp, into the backstage area, and into the open stadium where various tables and structures were set up.  Reigns ran Owens down with a golf cart, which drew a belly laugh from me.  There were multiple table spots, the best of which involved Owens swantonning off a raised forklift through a bunch of tables on the floor.  I have to credit both guys; I actually thought Owens might pull off the upset a few times.  The action moved back to the entrance stage, where Roman speared Owens through the LED panel for a near-finish.  Up to this point these guys had delivered a **** match, but then unfortunately Owens handcuffed Reigns to the bottom of a lighting truss.  Reigns couldn't stand up, and when the ref got to a 9-count, Roman threw him face-first into part of the production rig, knocking him out.  He incapacitated Owens with a nut shot, and Paul Heyman then showed up with a key to get him free.  But unfortunately because of how the cuffs were positioned, Heyman couldn't get them open, so Owens had to just lay there interminably, and the substitute referee simply stopped counting at 5 when he realized Reigns wasn't gonna make it.  Holy shit, was this a train wreck.  Finally Reigns was freed, and he just slapped on a guillotine choke to take Owens out and win the match.  What an anticlimactic finish.  How about instead of the babyface attempting to get a cheap win by handcuffing the heel, the heel handcuffs the babyface to the bottom of the truss and gets the cheap win?  Then there's no need to worry about unlocking him during the match.  Such a bad ending to a really good match. 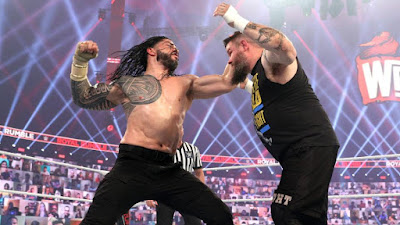 Now for the men's "Ok boomer" Royal Rumble.  As far as the work involved this was probably the best-executed match of the night.  There was a pretty good amount of star power sprinkled throughout, plus a bunch of good younger talents.  Matt Riddle looked like a million bucks and got a 31-minute run, nearly making the final four.  This was the best use of him since his call-up.  Shinsuke Nakamura was back to being the King of Strong Style, having shed the awful velvety body suit they had him in.  Seth Rollins was back from injury.  Ok now for the negatives.  So in the women's Rumble the winner lasted over 56 minutes to take the whole thing down.  But that accomplishment was eclipsed here by having the men's winner last the entire match, while the runner-up technically did the same before his elimination.  Edge drew #1 and won the whole thing, duplicating the same feat by Shawn Michaels, Chris Benoit, and really Rey Mysterio (who drew #2 in 2006 - 1 and 2 start together).  Randy Orton drew #2, got taken out after a chair shot to the leg, spent 3/4 of the match in the back, and returned at the very end to try to steal it.  So basically Orton is Vince McMahon in the 1999 Rumble.  That was stupid and predictable, the only swerve was that he failed to get the win.  Daniel Bryan, the odds-on favorite to win the Rumble, lasted 28 minutes but didn't even make the final four.  Did Edge really need a second Rumble win on his resume at 47?  I keep saying this, but there's a reason young people don't watch WWE anymore.  The only two sub-30-year-olds in this match, Otis and Dominik Mysterio, got a combined 2:53 of ring time.  Ricochet got 11 minutes and was eliminated by the 56-year-old Kane.  The 47-year-old Christian made it to the final four.  WWE all but ages the women out after they hit 35, but with the men they don't even take them seriously till that age.  It makes no sense at all.  Look, I get that Edge making a comeback after a decade on the shelf and getting one last WrestleMania main event is a feelgood story, but did he need to win a match that by all rights should've either gone to someone who could benefit from it?  Like I said, I liked this Rumble match, probably better than last year's, but the wrong guy won. 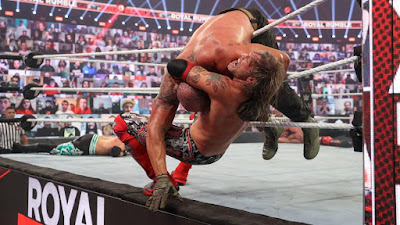 Participants: Edge, Randy Orton, Sami Zayn, Mustafa Ali, Jeff Hardy, Dolph Ziggler, Shinsuke Nakamura, Carlito, Xavier Woods, Big E, John Morrison, Ricochet, Elias, Damian Priest, The Miz, Matt Riddle, Daniel Bryan, Kane, Baron Corbin, Otis, Dominik Mysterio, Bobby Lashley, Hurricane Helms, Christian, AJ Styles, Rey Mysterio, Sheamus, Cesaro, Seth Rollins, Braun Strowman
Final Four: Edge, Randy Orton, Seth Rollins, Christian
Long Man: Edge and Randy Orton (58:30)
So yeah, it was an enjoyable Rumble card with two entertaining Rumbles, one of which was very productive.
Best Match: I gave the final three bouts the same star rating but since the women's Rumble told the best story I'll go with that.
Worst Match: Drew vs. Goldberg.  Stop trotting this guy out every six months to do the same shit.  He can't even deliver a two-minute match without gassing.
Most Disappointing Match: The men's Rumble, as I honestly thought this was Daniel Bryan's night.
What I'd Change: Give Bryan the hour-long Rumble win or make a new male star.
Overall Rating: 7/10
2020
And there it is, a complete history of WWE's Royal Rumble.  It's been quite the roller coaster ride over the years, but the Rumble match itself is still one of the year's most fun events, where stars can be created and the tone is usually set for WrestleMania.

Before I go, I'll share my top ten Rumble PPVs of all time, and my top twenty matches in Royal Rumble history.