It's that time again, when AEW does a slew of special Dynamite episodes with sorta loaded lineups to tide us over until All Out.  This Wednesday it's Night 1 of Fyter Fest 2021! 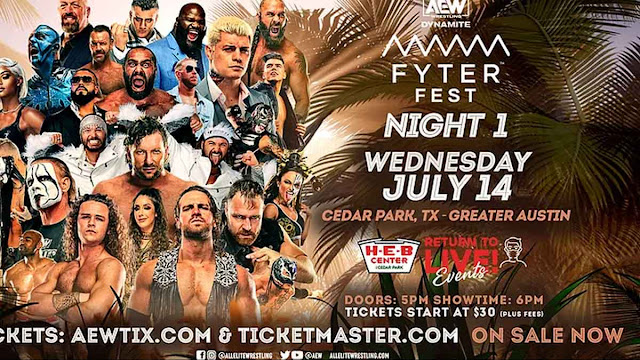 This lineup is pretty strong overall.  No AEW Titles up for grabs, but we do have an IWGP Championship on the line, plus the imaginary FTW Title, and a first-time gimmick match for the company.  Let's take a look...
Penelope Ford vs. Yuka Sakazaki 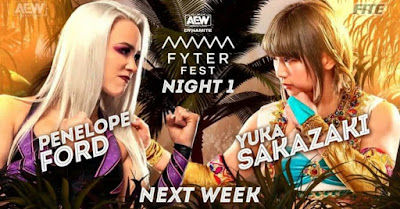 Not much of a marquee match here, but Sakazaki is making her first Dynamite appearance since pre-COVID.  I'm guessing this is a showcase match for her and she'll thus end up winning it.  Should be ok.
Pick: Sakazaki
JUST ADDED: Sammy Guevara vs. Wheeler Yuta 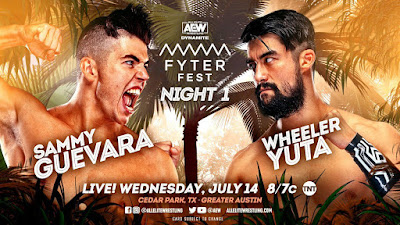 This match was just announced today.  No idea who Wheeler Yuta is but I hope his brother Johnny Yuta gets me two.  Yeah, that's right, I dropped in a Point Break reference to celebrate its 30th birthday.  Sammy is obviously winning this quick squash showcase.
Pick: Sammy
Christian Cage vs. Matt Hardy 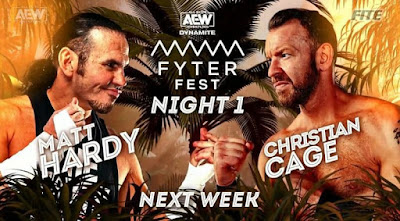 Well that's weird.  Two Attitude Era WWF guys fighting each other in 2021 on a non-WWE show.  I'm glad this isn't a PPV match, as two 45-plussers from twenty years ago wrestling each other on a PPV is Vince's bag.  They'll both be motivated to prove they can still go, but I have a feeling this will be rife with interference from Matt's stable.  I think Christian pulls out a win anyway though, probably on his way to a Dynamite or Rampage match against Kenny Omega sometime in the next few months.
Pick: Christian
FTW Championship: Brian Cage vs. Ricky Starks 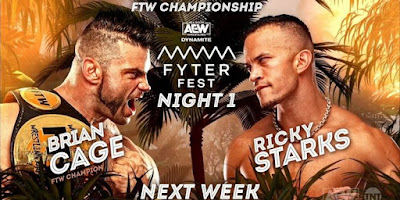 The other Cage is up against his former bestie, putting his honorary title on the line.  Cage has been slowly on the outs with Team Taz for months and I'm guessing this is where everything will finally come to a head.  Team Taz will likely screw Cage over so Ricky can have the belt, and it will lead to several weeks of Cage feuding with his old stablemates.
Pick: Ricky
Coffin Match: Darby Allin vs. Ethan Page 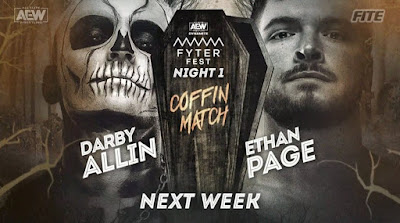 I wonder what the rules for this match are.  Will it be like WWE's casket matches or will AEW come up with their own stipulations?  This should be quite something, as these two have years of experience wrestling each other, Allin is a crazy person who will take any kind of bump he wants, and they'll want to make an impression with the first AEW coffin match.  Seems like Allin ought to win the first instance of HIS match, but I could see Page taking this too.  Eh, I'll go with Darby.
Pick: Darby
IWGP US Championship: Jon Moxley vs. Karl Anderson 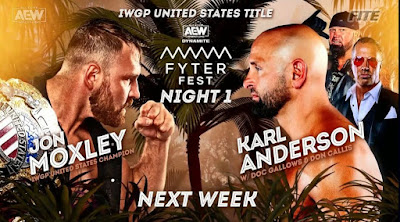 Moxley's first IWGP US Title defense on Dynamite was a helluva fight and I expect as much here.  Fun to see Karl Anderson in a New Japan match again, even if it's not on a New Japan show.  I don't expect a title change but this should be a damn good match and could either serve as an opener or a main event.  I hope Mox and other NJPW US guys will be able to take part in the G1 this year....
Pick: Moxley retains
Kind of a low-key stacked lineup for Night 1 but this should be a fun show.  At least two of these bouts should be quite memorable.
Thanks for reading - subscribe to our mailing list, and follow us on Twitter, MeWe, Mix, Facebook and YouTube!
Posted by Justin Enuffa Ballard at 12:02 PM