Welcome to the second part of  our Anthrax - 40 Years, 40 Songs countdown!


We've reached #30-21, and in this installment we'll talk about some of the band's lower-tier classics. 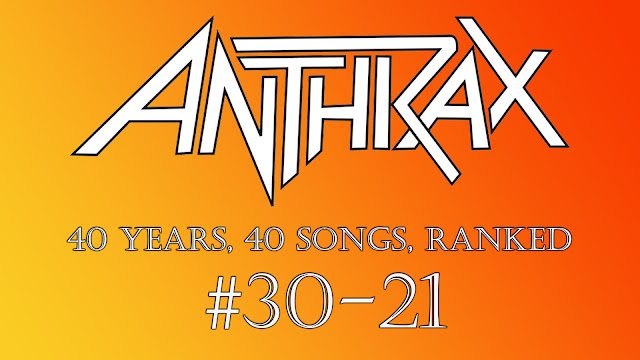 30. Harms Way
One of the quirkier tunes on Volume 8 is this alt-rocker that kicks off with acoustic guitar and a brash John Bush announcing "Here comes the biggest asshole that the whole world has ever seen," before settling into a syncopated midtempo groove.  The chorus hook is one of the catchiest on the record and would've been right at home on late 90s post-grunge radio.  And don't forget the slide guitar solo in the middle....
29. Bring the Noise 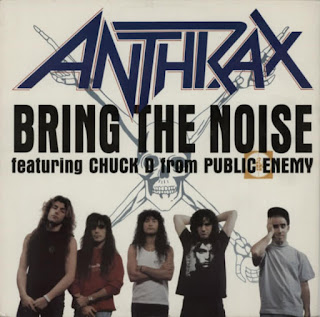 Perhaps even more significant than their first rap foray "I'm the Man" is this Public Enemy cover/team-up, featured on the Attack of the Killer B's EP.  "Bring the Noise" was a massive crossover single and stands as one of the earliest metal-rap mashups.  The song was so well-liked by fans of both groups it led to a double-headlining tour in the fall of 1991.  Only a few years later rap-metal fusion had become its own genre, dominating rock radio and influencing both pop culture and fashion for years to come.  "Bring the Noise" can be cited as one of the form's earliest prototypes.
28. Got the Time 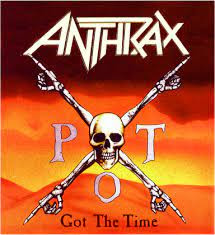 Another cover song that brought the band much airplay was this bouncy, energetic Joe Jackson remake about day-to-day stress, featured on Persistence of Time.  Scott Ian's furious picking lent itself perfectly to the feel of this sardonic tune, while Frank Bello got time to shine with a rare bass solo.  As they'd done with their "Antisocial" cover two years earlier, Anthrax made "Got the Time" their own, and it became a staple of their live shows.
27. The Constant
The penultimate track on 2011's Worship Music (Joey Belladonna's first Anthrax record in twenty years) is a basic but powerful driving metal song with a descending chorus riff, over which Belladonna describes a harrowing leap into the unknown (the future perhaps?) - "Scream as my heart pounds/Moving so fast now?/I am here, I am here."  The song is a highlight of one of my favorite Anthrax records; Worship Music was a return to the classic sound featured on Persistence of Time and it felt like the band had finally come home.
26. Crawl
Another song from Worship Music, "Crawl" is a moody midtempo tune that features Joey Belladonna turning in a soulful performance, delivering a dirge that seems to be about the inevitability of death - "When my time has gone away, the words I saw/Their lies will help you through," "Your mind is closing in on a fight that you can't win/It's making me insane..."  "Crawl" has the structure of a power ballad but boasts a much darker timbre and bleak lyrics, and it's another standout from the band's celebrated reunion with Joey.
25. Black Lodge 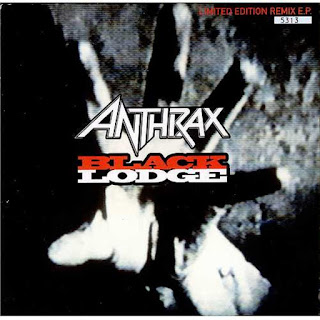 Maybe the most unusual Anthrax song is this funereal, atmospheric ballad from Sound of White Noise inspired by the TV show Twin Peaks (and co-written by the show's score composer Angelo Badalamenti).  Bush's mournful vocals float over a tremelo guitar riff, and the song builds to a wall of layered guitars as Bush laments "I am a witness to your demise/I am the one who saw through the lies."  Like Metallica's "Nothing Else Matters," "Black Lodge" was Anthrax at their most fearlessly experimental, crafting a song unlike anything else in their catalogue.
24. Fight 'Em Til You Can't 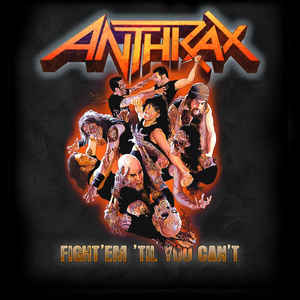 Still another favorite from Worship Music is this zombie apocalypse anthem, no doubt inspired by The Walking Dead, which had premiered during this album's production.  There's nothing fancy going on lyrically, it's a throwback to an era when metal songs were often about a popular film or book, and "Fight 'Em" would be right at home on Among the Living or Persistence of Time.  Released as the first single off the album, this song heralded Anthrax's full return to their roots.
23. Stealing from a Thief
Volume 8's closing track (not counting the haunting hidden ballad "Pieces" which Frank Bello wrote for his recently-murdered brother Anthony) is full-on alt-metal, an eccentric ode to finding one's own way by any means necessary.  "Stealing from a Thief" features one of the band's most well-written rock choruses - instantly hooky without feeling compromised.  It's a perfect closer for Anthrax's most unconventional record.
22. Hy Pro Glo 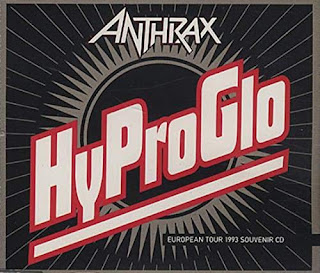 This grungy, triplet-based rocker from Sound of White Noise seems to be about advertising, calling out a target for constantly lying while revealing a tinge of envy over "that look I wanna know."  Its main riff is a simple three-note pattern but the groove it establishes is undeniable, and John Bush's vocals are rife with sarcasm and derision.  I assume the title is intended to sound like the name of a hot new cleaning product or a revolutionary brand of shampoo, and it matches the satirical tone of the song.
21. I Am the Law 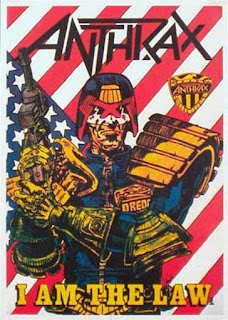 One of the band's all-time classic tunes is this Judge Dredd-inspired anthem, the first single off the acclaimed Among the Living album.  Scott Ian stumbled onto a copy of the 2000ad comic book while touring England, and was immediately fascinated with the no-bullshit, tough-as-nails Dredd and his dystopian world.  The lyrics are essentially a Dredd history lesson for the uninitiated, and it immediately became a crowd favorite.  Musically the song features an uncharacteristically slow, stoic tempo, until the bridge where Anthrax bursts into a full thrash gallop, echoing the ferocity of its subject.
Stay tuned for Part 3!
Thanks for reading - subscribe to our mailing list, and follow us on Twitter, MeWe, Mix, Facebook and YouTube!
Posted by Justin Enuffa Ballard at 9:23 AM