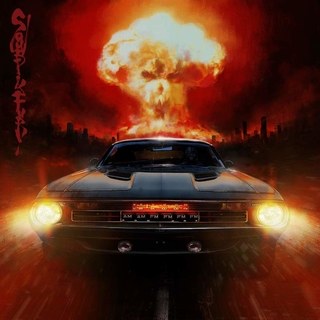 Sturgill Simpson’s third album, A Sailor’s Guide to Earth, was a concept album that stood as an open letter to his first born son. It was a heartfelt project filled with love, lessons, worry, pain and hope and it garnered the Kentucky native critical acclaim and commercial success, but also the Grammy for Best Country Album. I ranked it as the #4 Album of 2016. It was some of his best work to date and caused critics and the country music establishment to go crazy over him.

His newest release, Sound & Fury? He’s just looking to burn all that shit down.

Turning to a new sound, Simpson has adopted a heavier, bluesier tone and combined with Bobby Emmett’s synths, his songs have a more dystopian feel to them. The listener is immediately oriented to the new sound by the instrumental intro track “Ronin”, a title that carries an underlying theme and statement throughout the album: Sturgill’s doing his own thing and leaving a trail of fire in his wake. “'Cause it's "fuck all y'all" season, don't give me a reason/And watch your house burn to the ground” he plainly states on “Last Man Standing”, a high energy, barn burner of a song that seems to take aim at the country music industry as a whole and all the bullshit and hypocrisy that comes with it.

Those who have followed Sturgill’s career are used to this attitude from him, but he’s setting the record straight for any new listeners coming his way, thanks to his 2016 Grammy win. Sturgill just wants to be left alone to do what he does best and be surrounded by those who care. “Mercury In Retrograde” takes exception to those that seek him out with ulterior motives, while “Best Clockmaker on Mars” sees Sturgill ache to be back home, alone with his wife who is not afraid of calling him out on his bullshit. It’s a refreshing love song from Simpson lyrically, yet with a sick bluesy guitar riff and heavy synths as the backdrop, he still sounds annoyed as fuck. Not that that’s a bad thing because it’s a killer track.

It’s the instrumentation that is the most jarring but also the strength of this project. At first listen, it was unsettling to hear Simpson’s thick country vocals in the middle of this heavy, psychedelic music. As my wife said, “This doesn’t sound like Sturgill Simpson.” Once I was on my second and third listens it clicked, and sounded like Sturgill was not only in his wheelhouse, but actually having a great time.  These elements only began to heighten the songs for me. There’s a great mix between the guitar, synths and bass on the lead single “Sing Along” that gives it such a unique texture. The song is also home to my favorite lyric “I know you know that you’re killing me but it’s worth it just to see you smile”. Hot damn y’all.


The closing track “Fastest Horse In Town” shows Simpson at his most vulnerable, effectively questioning the value of his profession versus spending time with his family and dealing with the responsibilities at home. It’s a brutally open and honest examination. “Oughta be watching the children playing in the yard I never see, I should be mowing today, Instead, I'm searching for ways to say all the words I can't find”. It’s a heartbreaking picture but done so well and conveys such doubts that only a man who truly cares can have. It’s him realizing what’s important in life while also acknowledging his instinct as an artist to find inspiration for his songs. The sincerity in his performance and delivery is genuine, if not seemingly stoic.

The album is paired with an anime film of the same name that is available on Netflix, as it provides the soundtrack. According to Simpson, the album was finished last year but since he was so interested in the idea of making a film to go along with it, he sat on the album for a year until it was done. Simpson wrote the film along with producing it. As interested in the film as I was, I found that one could just listen to the album and be fine.

Nevertheless, Sound & Fury is filled with great songs. Sturgill’s ability to take on a new sound and style is not only pushing his creative boundaries but also expanding the breadth and palette of the country music genre itself, whether they like it or not. Labels are annoying, but Simpson is definitely living up to the outlaw country moniker with this release, doing what he wants and not worried about where or how the chips may fall. This project helps build on his already impressive body of work and we will be lucky if he continues this trend with future releases.