The 1990 edition was a major step down from the first two, which were flawed shows to begin with.  This one's pretty terrible....


What a mess this show was.  They tried to cram 10 matches in, only 9 of which happened due to a forfeit, the WWF Champion was given an opponent who was never built up to be a World Title contender, thus stripping the main event of any suspense, and Hulk Hogan was once again paired with an obese monster heel.

First we'll highlight the good parts: The Rockers fought the new tag team of Hercules and Paul Roma, dubbed Power & Glory in more of an angle than a match.  Shawn Michaels was "injured" at the outset, leaving Marty Janetty in a handicap situation.  But it was a nice introduction of the new heel team, who unfortunately never got much traction after this.

The Hart Foundation once again challenged Demolition for the Tag belts, this time in a 2 out of 3 falls match.  And once again the Harts stole the show at SummerSlam, supplying 15 minutes of solid tag team action.  The Harts finally won the Titles and the recently-debuted Legion of Doom were set up to feud with their WWF imitators. 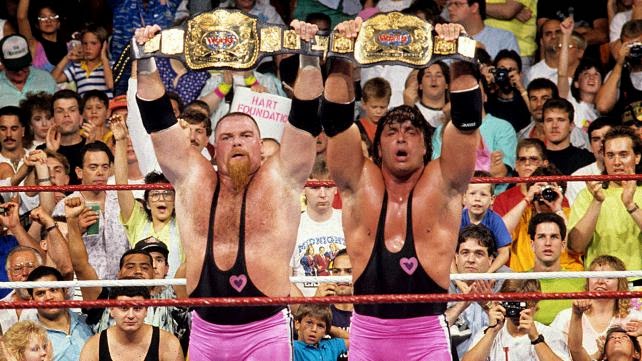 The main event cage match between The Ultimate Warrior and Rick Rude was a pretty good ten-minute bout.  Nowhere near as good as their 'Slam '89 match, but not bad at all.  Unfortunately Rude hadn't ever been positioned as a serious WWF Championship challenger and since Warrior defeated him the previous year (and a month before this PPV on Saturday Night's Main Event) there wasn't much heat for this match.  Rude would leave the WWF shortly after this.  Sadly for Warrior he was never really pushed as the #1 guy in the company after winning the Title from Hogan.


Now for the rest of the show.  Hogan's match with Earthquake is nigh unwatchable; yet another Hogan vs. Big Fat Dude match that tried unsuccessfully to recapture the magic of Hogan vs. Andre.  They added The Big Bossman and Dino Bravo as the two corner men to create more intrigue, begging the question: Why not just make this a tag match?

Randy Savage was completely wasted in a two-minute squash of Dusty Rhodes, and his manager Sherri Martel beat Dusty's valet Sapphire by forfeit when Sapphire sold out to Ted Dibiase.

The other major bout was Mr. Perfect defending the I-C Title against a mystery opponent, because for the second time Brutus Beefcake had to miss his scheduled Title shot, this time due to a real-life injury caused by a parasailing accident.  Beefcake's substitute was WWF newcomer Kerry Von Erich (one of my all-time least favorite wrestlers), who made short work of Perfect to win the belt.

Add three other forgettable midcard matches and you have yourself a show very indicative of the piss-poor WWF PPVs in 1990.  They weren't doing very much right at this time and it was evident in all their major shows.

Best Match: Demolition vs. Hart Foundation
Worst Match: Jim Duggan/Nikolai Volkoff vs. Orient Express - Really?  This was on an actual PPV?
What I'd Change: I'd trim some of the fat to allow the two best matches - Harts vs. Demolition and Warrior vs. Rude - to be much longer.  I'd probably make the Hogan match a tag match just to make it a little faster paced.  I'd give Savage a real match to work with, whether that means giving him and Dusty a good 10-12 minutes or giving him a fresh opponent.  How does Savage only get two minutes?
Most Disappointing Match: Savage vs. Dusty.  I say again, two minutes??
Most Pleasant Surprise: Not much really.  What little I expected to enjoy, I did.
Overall Rating: 3/10
Better than WrestleMania VI? - Yes, but they're both garbage.