Welcome to another edition of Awesomely Shitty Movies, where I take a closer look at a movie that's either a guilty pleasure, an overpraised mound of tripe, or just a disappointment.  Today's entry is the latter.  That's right, it's one of the biggest letdowns in movie sequel history, Robocop 2! 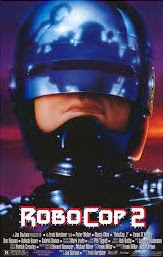 In 1987 director Paul Verhoeven and writers Ed Neumeier and Michael Miner unveiled a near-perfect masterpiece of sci-fi/action/dark comedy/political satire with the original Robocop.  Part takedown of unchecked capitalism, part Christ allegory, part superhero romp, part ultraviolent gorefest, Robocop amazingly managed to juggle all these different tonal elements and weave them into a tightly written, multi-layered thrill ride that could be appreciated on varied levels.  Robocop has to be one of the smartest-written popcorn movies of all time; a brilliant marriage of deft scripting, superb direction and gut-wrenchingly amazing makeup effects (courtesy of past-master Rob Bottin).  I could go on for pages about how goddamn awesome that movie is, but that's not why I'm here.

The 1990 sequel on the other hand, while not a total miss, nonetheless fails to live up to its predecessor on basically every front.  There was a lot of potential here, with a script from comic book genius Frank Miller and direction by Irvin Kershner, who a decade prior had made one of the greatest sequels ever.  How could they possibly go wrong?  Well, they found a way.  They found a lotta ways.  Robocop 2 has some things going for it, but it's also got a metric fuckton of issues.

Let's take a look, shall we?

I'm not sure any other actor can ever play this role.  It certainly hasn't worked yet with anyone else (Robert John Burke and Joel Kinnaman, I'm looking in your general direction).  Weller was born to play the tragic figure of this martyred officer-turned-cyborg.  His understated, taciturn demeanor and everyman heroism make him perfect for this conflicted character.  Sadly the script here doesn't give him nearly as much to do as in the first film; in the first act he's still struggling to let go of his previous life (something that was seemingly resolved in the first movie), in the second act he's barely present at all, and in the third he's relegated to pretty mindless action movie antics.

Robocop 2 brings back the satirical tone of the first movie, complete with over-the-top violence that is both disturbing and darkly comic, plus those wonderfully droll newscast/TV commercial interludes.  Two of the best moments in the entire film are when a couple of the "Robocop 2" prototypes immediately commit suicide; it's both grisly and hilarious, like so many moments in the first movie. There's also the political backdrop of OCP plotting to essentially buy out control of Detroit so they can tear the entire thing down and finally build Delta City.  This all fits in well with what Neumeier, Miner and Verhoeven established in the original.

Tom Noonan (whom I mentioned in my Last Action Hero piece) is back as yet another effectively creepy villain, in this case drug lord Cain, whose designer drug Nuke has taken Detroit by storm.  After a standoff with Robocop, Cain ends up on life support and becomes OCP's choice for the Robocop 2 project.  Noonan only appears in the first half or so; once his brain stem goes into the giant robot he's reduced to a special effect unfortunately.  Cain is sadly nowhere near as strong a villain as Clarence Boddicker, but Noonan does alright with what the script gives him.  This guy was born to play weirdo creeps.

Belinda Bauer plays one of the more intriguing new characters, Dr. Juliette Faxx, who convinces the Old Man (CEO of OCP) to let her take control of the Robocop 2 project, putting forth the idea that police officers generally don't have the psychological makeup for being turned into cyborgs.  She opts instead to search for a criminal whose addiction to narcotics will make him easier to control, and thus the Robocop 2 fiasco takes shape.  Bauer competently conveys Faxx's icy deviousness, making her a fairly interesting corporate villain.  And it's a good thing, because she gets a lot of screen time.


So this movie does have some strengths, but there's also a lot about it that doesn't work....

At the time this movie was greenlit, Ed Neumeier and Michael Miner had put together a treatment for the sequel, but unfortunately a writers' strike broke out and the studio needed to look outside the Writers' Guild for a full script.  Enter Frank Miller, of The Dark Knight Returns fame.  Now, as a comic book writer, Miller has given us some of the greatest work the genre has ever seen (TDKR, Sin City, Daredevil).  As a screenwriter however he leaves a lot to be desired (Don't even get me started on his solo directorial work).  Granted, the producers kinda gutted his Robocop 2 script, but from what I understand the comic book version of his original screenplay is even worse than what we ended up with here.

Anyway, this script is a pretty unruly mess, with lots of ideas thrown around but none of them adequately explored.  The first act sees Robocop still pining for his family but that thread is tied up in the first twenty minutes, begging the question, "Why is it even here?"  There's a subplot about OCP bankrupting the city so they can buy it at a steal, but that's left unresolved at the end.  Robocop gets torn apart and put back together, now programmed with hundreds of directives, but almost immediately resolves it by electrocuting himself to cause a system reset.  There's a city-wide police strike that doesn't even really figure into the story, and I suspect it's only there because the first movie mentioned one.  In the end all that's resolved is that Robocop 2 is destroyed and Faxx is taking the fall.  Did Irvin Kirshner think he was making another Empire Strikes Back, where part 3 would tie up all these loose ends?

One of the central plot devices in this film is the introduction of the highly addictive street drug Nuke, with which Cain has flooded the city, making him rich and powerful.  First, I'm not sure why one of the existing real-world drugs wouldn't have sufficed here like in the first movie.  Second, I hate the execution of the Nuke gimmick (and the name itself).  It's in a little tube with a tiny needle on the end of it, and the user sticks said needle into the carotid artery and squeezes the tube, at which point there's a goofy sound effect reminiscent of the turbolift doors opening on Star Trek.  It's super cheesy and took me right out of the movie.

One of Cain's henchmen is a ten-year-old boy named Hob, who swears like a Scorsese gangster and shoots people right alongside his grownup counterparts.  I hate this character, and not in the way you're supposed to.  He just seems totally out of place and thrown in as an excuse for the film to be edgy.  Why would a drug dealer keep around a pre-pubescent as part of his inner circle?  And why later when Hob gets killed are we supposed to feel anything for him, when he's been a loathsome little shit the entire movie?  This character can go jump in the ocean.

I know the movie is largely about Robocop 2 (which is kind of clever actually - the sequel title actually refers to a character), but Murphy and Lewis still need to be the heart of the film.  Unfortunately Lewis is reduced to a tertiary character (evidently Nancy Allen and Kershner didn't get along) and Murphy is all but forgotten through much of the second act, when the focus is squarely on Cain and his transformation into a robo-monster.

One unavoidable issue with this film is that so many of the best characters from the first are killed off in that movie.  Dick Jones, Bob Morton, Clarence Boddicker and his crew were all fascinating to watch and fleshed out into three-dimensional people, good or bad.  Robocop 2 suffers from their absence and doesn't introduce interesting enough characters to fill that void.  Cain is nowhere near as good a villain as Boddicker, nor is Faxx an adequate replacement for Jones.

Perhaps the biggest underlying problem with Robocop 2 is that nothing really changes from the start to the end.  The city is still a crime-ridden cesspool, the corrupt OCP is still essentially running the place, the police force is still in shambles, and it's Murphy and Lewis against the world.  Faxx's rise to power and her Robocop 2 program are a non-factor at the beginning and by the end they're a non-factor again.  So what was the point of it all?  I guess the Alex Murphy character really only had a one-film arc.

-Would the Old Man really go along with Faxx using a drug-addicted criminal as the Robocop 2 subject?  The first Robocop worked because Alex Murphy was a decent man with a sense of duty.  Yes, Cain's addiction to Nuke gives OCP a way to control him, but once on the street, what does he care about stopping crime?


-And why would they go with another clunky, awkward, oversized, military-style machine?  Robocop 2 packs incredible firepower but he's too big and clunky to effectively fight crime or make arrests.  Seems like a recipe for another ED-209, no?  Has he been tested on stairs at least?

-Why does the Old Man not have a name?  I think to become a CEO you do need a proper name, no?

-How long do you think the filmmakers spent coming up with the villain's name?  Like, really?  Cain?  Where's Abel?  Did you get that out of The Filmmaker's Guide to Stock Characters?  Clarence Boddicker is an imaginative name for a bad guy.  Cain is fuckin' hack.

-I hate Lewis's mom-hair in this movie.  Her short do in the first film fit her tough-ass character.  This hairstyle doesn't.

Well at least Robocop 2 isn't as bad as Robocop 3.  But it's not very good either.  It's a jumble of promising but underexplored ideas, too many new characters, less interesting visuals, and a plot we don't care that much about, all so we can get to a big dumb fight sequence.  I'm really curious to see what Neumeier and Miner's original idea was for this movie, and I hope Neil Blomkamp gets to actually make it so we get a proper sequel to one of the best sci-fi actioners ever.


Anyway, that's all I got for now - thanks for reading, and join us on Facebook, MeWe and Twitter!

Posted by Justin Enuffa Ballard at 9:23 AM