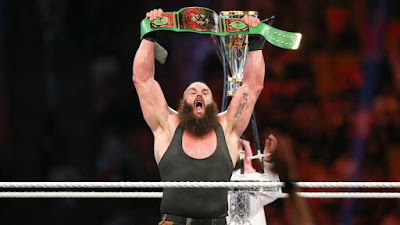 Jeezus that show was long.  WWE's Greatest Royal Rumble, in the new tradition of WrestleMania, ran an exhausting five hours, with a near 80-minute Rumble main event.  Had the show been a blowaway hit, the excessive running time (bloated with what were essentially propaganda segments designed to make everyone feel good about how far the Saudi kingdom has come, ya know, since women are allowed to drive now) could be overlooked.  But sadly most of the matches came off like house show bouts, with everyone sorta going through the motions.  There were a few standouts but nothing in the **** realm.

The show opened, oddly, with John Cena vs. Triple H in a textbook house show match.  This moved very slowly in the first half and built to a couple false finishes, ultimately coming across like two aging wrestlers really taking it easy.  As an opening match designed to get the somewhat casual audience excited this was fine.  I wouldn't watch it again though.  Cena won after multiple AAs for the expected feelgood ending.


One of the minor standouts was the Cruiserweight Title match, as Cedric Alexander and Kalisto had an energetic little battle with some innovative spots.  Again, the talent in the division is quite good, they just need a true star to carry the ball.  Cedric is exceedingly capable between the ropes but I don't see him as a division centerpiece.  But this match was fun and served as the one real hit of the first five bouts.

The next three matches were house show-quality at best.  Bray Wyatt and Matt Hardy defeated The Bar in a match that wasn't at all fitting of a tournament final.  It felt like Wyatt was the only guy who really got to do anything here.  How a Cesaro and Sheamus match can be totally forgettable is beyond me.  So Wyatt & Hardy will presumably hold the belts for a while until the inevitable break up.  Eh...

The worst match of the night, not surprisingly, was Jeff Hardy vs. Jinder.  If anyone needs further evidence of Jinder's suckitude, watch the spot where Jeff goes for a Whisper in the Wind, misses by a mile, and Jinder sells it anyway.  That Vince McMahon thought this guy was WWE Title-worthy still hurts my brain.  Reinstate this guy as Jobber to the Stars, dude.

And the other Tag Title match was predictably short, as Harper & Rowan beat the shit out of the Usos in roughly five minutes.  This was fine for what it was meant to be.  I assume The New Day are next to feud with the Bludgeons.

The show finally picked up with the 4-Way Ladder Match, as Seth Rollins, The Miz, Finn Balor and Samoa Joe put on a very safe but enjoyable schmozz that amazingly only employed the use of a single ladder.  This was quite a throwback in a way.  The spots all looked good while being fairly tame, but it didn't hurt the bout much.  The finish was also very novel, as Finn was about to grab the belt but Seth vaulted off the top rope to the ladder and snatched it down before Finn could get it.  Finn sold it like a heartbreaking turn of events and I hope this leads to a Finn heel turn.  I know Miz is getting the next shot at Backlash but since he and Joe are on Smackdown now, Finn is the next logical challenger.  Finn should attack Seth at Backlash to set up their spring/summer feud. 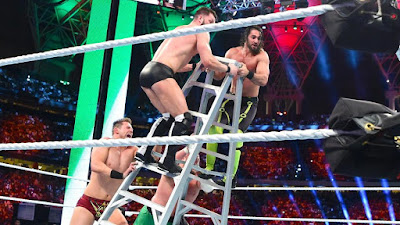 For me the Match of the Night honors go to AJ Styles vs. Shinsuke Nakamura, as this match felt much more urgent than their 'Mania encounter, and despite having a non-finish was more crisply worked.  Nak's heel turn seems to have lit a fire, and I hope we'll see the definitive Dream Match we were all hoping for next week.  This only went 14 minutes but the fast pace made it feel longer.  Nak took advantage of a minor ref bump to low blow Styles and cover him, only for Styles to grab the bottom rope.  The action spilled to the outside and both guys were counted out.  Nak really should've crawled back in at the last second to necessitate a rematch, but whatever.  AJ got pissed at the end and nailed Nak with a Phenomenal Forearm on the outside to continue the feud.

The Undertaker-Rusev Casket Match was.....what it was.  Rusev got plenty of offense but ultimately looked pretty weak, taking a chokeslam that somehow kept him incapacitated long enough for Taker to chokeslam and Tombstone Aiden English and dump them both in the casket for the win.  This was inoffensive but pretty pointless.  I'm still not sure why Taker cheapened his retirement last year for fluff like this.

I said Jeff vs. Jinder was the worst match on the card, but Stupidest Match honors go to Brock vs. Roman.  If you read my WrestleMania review you'll note I was a big fan of that main event.  I thought Brock and Reigns worked hard and delivered a real slugfest on par with their 'Mania 31 meeting.  That wasn't the case in this cage match.  They basically fast-forwarded to all signature moves, seemingly attempting to one-up the Brock-Goldberg match from last year, except it didn't work at all this time.  Brock hit only suplexes and F5s, Roman hit only Superman punches and spears, and after nine minutes Roman speared Brock through the cage, knocking out an entire panel.  This spot looked very cool, but the aftermath was pure nonsense.  The rules of steel cage matches have always stated that the first one to escape the cage and have both feet touch the floor is the winner.  Right?  Like there have been instances where a guy partially escapes and both hands touch the floor but it still doesn't count.  So how in the fuck does Brock win in this match when Roman spears him through the cage and rolls to the floor, while Brock is still laying on the cage panel at a 45-degree angle, his feet nowhere near the floor?  When they declared Brock the winner I was like "Well clearly another referee has to come down and say that Roman actually won, right?  Or Kurt Angle?  Or Vince?  Or the King of Saudi Arabia?  No??"  Even the announcers had no idea how to cover for this stupidity (The announcing on this show by the way was embarrassing, either from jetlag, or awkwardness or uncertainty because of where they were, I dunno, but it was terrible.).


This HAS to be the end of the Roman babyface experiment, right?  Are we seriously supposed to care about his quest for the title now that he's failed to beat Brock THREE TIMES?  Considering what happened in the Rumble match (we'll get to that in a bit), it's absolutely time to turn Roman heel and let the fans' hatred of him be justified in storyline.  Then in a year you'll potentially have a white-hot babyface turn.  But you CANNOT do Brock-Roman again.  This is a dead horse.

Now for the 50-man Rumble.  Holy shitballs this match was long.  There weren't any dead stretches like there are in some of the really bad Rumbles; they did an admirable job of keeping things moving, but it just felt soooooo long.  Twenty guys in I was like "Fuck, there's still an ENTIRE regular Rumble to go..."  The positives here were Daniel Bryan entering at #1 and lasting till the final three (while having his chest literally ripped apart from chops), shattering Rey Mysterio's longevity record by 14 minutes.  I love this, because it's unlikely this record will ever be broken.  Even if there's a 50-man Rumble every year in Saudi Arabia, there's no way anyone's gonna duplicate this feat anytime soon.  76 minutes is a pretty ironclad accomplishment for D-Bry.  So for that reason alone this Rumble was worth it.


Sweet mother of fuck this was the funniest thing I've ever seen in a wrestling match.  And the announcers' reaction made it even funnier.  Corey Graves was LOSING HIS SHIT over this.  Titus is the new Shockmaster, and I'll bet real money this is his new gimmick.  Poor Titus.

Anyway, Braun Strowman won the whole thing, and if there was any doubt he needs to be the guy to dethrone Brock Lesnar, that should be gone now.  Pull the trigger on Braun, make him the mega-babyface for a while, turn Roman heel, and have Roman beat Braun at SummerSlam.  This will be the monster feud of the year.


So this show was decent but definitely not anywhere near worthy of a five-hour mega-show.  It was mostly forgettable, easygoing house show stuff, with a few highlights and no title changes.  Backlash looks to be an infinitely better show than this.  But this wasn't terrible either and had enough going on to make it worth one watch.  Plus, this:

Best Match: AJ Styles vs. Shinsuke Nakamura
Worst Match: Jeff Hardy vs. Jinder Mahal
What I'd Change: Again, cut out all the bullshit segments in between, which would reduce the running time by at least a half-hour.  Maybe limit the Rumble to 40 men?
Most Disappointing Match: Brock vs. Roman - Give it up guys, Roman as the top babyface ain't happening.
Most Pleasant Surprise: Bryan breaking the Rumble record
Overall Rating: 7/10


Posted by Justin Enuffa Ballard at 11:19 AM