Welcome to an epic installment of Top Ten Things, here at Enuffa.com!  Why is this one epic, you ask?  Well because today I'm counting down the ten* greatest matches of the man pretty unanimously considered (by those familiar with his work) the best damn wrestler on the planet at this moment, the current IWGP Heavyweight Champion, Kazuchika Okada! 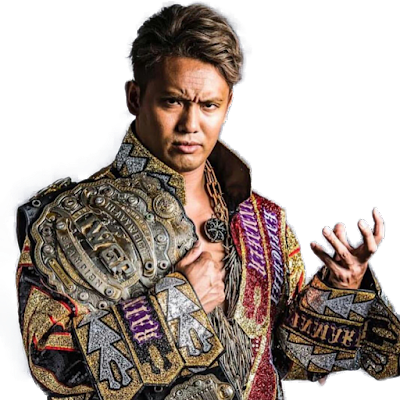 For those of you not acquainted with Okada, he is New Japan Pro Wrestling's "Ace."  Their top dog.  Their biggest box office attraction during one of the company's most lucrative periods since its formation in 1972.  At only 30 years old, Okada has already mastered literally every facet of the game (and sweet Jeezus, he may not have even peaked yet!), having been selected in 2012 as the heir apparent to Hiroshi Tanahashi (NJPW's previous top guy, who led their 2007-2015 resurgence).  Tanahashi is as responsible as anyone for helping Okada get where he is today, but even aside from their years-long feud, Okada has proven virtually incapable of having a bad match, more often than not turning in absolutely stellar performances both in terms of action and storytelling.  Kazuchika Okada is the complete package: great look, super charismatic, eminently athletic (I submit as Exhibit A his balletic dropkick), boasts compelling and diverse moveset, and wields one of the best-protected finishers in the business, the Rainmaker clothesline.  Some consider the Rainmaker too simple a finisher, but it's all in the way it's presented.  Nearly all of Okada's moves target the opponent's neck, weakening it throughout the match to soften it up for the killing stroke of the spine-bending short-arm lariat.  Sometimes it takes multiple Rainmakers to put an opponent away, but unless your name is Tanahashi, Naito or Omega, you're not kicking out after that move, ever.  Okada is the longest-reigning IWGP Champion of all-time (both in a single reign and cumulatively) and is well on his way to reaching a full two years in this, his fourth overall title run.  If you're a NJPW fan, consider yourself lucky to be alive in this moment, as we're witnessing a once-in-a-lifetime star.

But which Okada matches stand out from the rest?  Well I've managed to narrow it down to ten, with a couple asterisks.  I cheated a bit with the top two entries, as they each deal with a series of matches which would be both impossible to rank individually AND eat up the entire list.  So with that said, read on..... 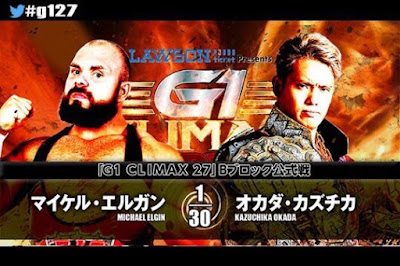 One of the earliest great matches of the 2017 tournament, Okada vs. Elgin showcased both men at their best, each pummeling the other with their full movesets.  The contest became about Elgin's mindnumbing power against Okada's well-rounded offense and unparalleled grit.  After 25+ minutes, during which Elgin countered a Rainmaker into a gasp-inducing powerbomb, Okada finally nailed a Tombstone and multiple Rainmakers to take his second win of the tourney.  This was a main event in every sense of the word. 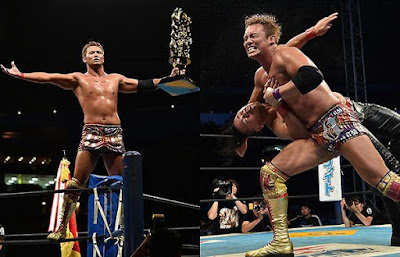 The 2014 G1 Climax all came down to the co-leaders of the CHAOS stable, who waged an intense, action-packed 23-minute war for the right to main event WrestleKingdom 9.  Okada had recently dropped the IWGP Title to New Japan's newest star AJ Styles, and the story of this G1 was Okada's journey, clawing his way back into title contention.  In the closing moments Okada defiantly leveled his stablemate with repeated Rainmaker clotheslines, putting an exclamation point on his tournament win, and completing a masterful bit of storytelling.  They'd nearly equal this match a year later on the penultimate night of G1 25, but for me this bout is their definitive one. 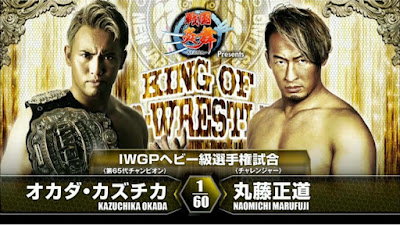 Perhaps one of the unexpected classic bouts of 2016 was this KOPW main event pitting the NJPW Ace vs. the NOAH Ace.  A rematch from their excellent G1 battle, this match exceeded that in my opinion, almost never letting up during its 28-minute runtime.  Marufuji was beyond aggressive, going after the IWGP Champion with no remorse, at one point hitting an absolutely sick-looking apron piledriver.  Some finisher stealing and several gripping near-falls later, Okada pulled through to retain after multiple Rainmakers, echoing his WrestleKingdom 10 match with Tanahashi.  This was the match that made me fully stand up and take notice of just how good Okada was becoming, foreshadowing the milestone year he was about to have in 2017. 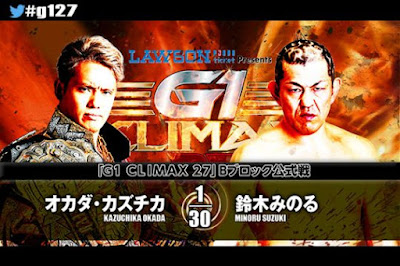 One of the big stories of the 2017 G1 was Okada's apparent invincibility, as the IWGP Champ won his first six tourney matches, surging ahead of his B Block competition.  But his luck and stamina seemingly ran out in match 7 with an upset loss to Evil, and the trend continued here in a grueling 30-minute draw with a grizzled sadist named Suzuki, that devolved into a brutal striking war of attrition.  Okada was able to outlast Suzuki six months earlier but couldn't put the merciless bastard away here.  This was in my estimation even better than their New Beginning match, with just as much violence but a bit more urgency. 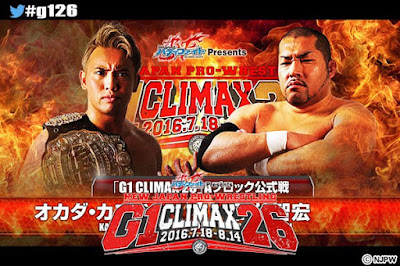 The 2016 tournament's first ***** match pitted the two Chaos stablemates against each other in a blistering 19-minute sprint.  There was nary a bit of fat on this match, as Okada's well-rounded offense met Ishii's bulldozer strikes.  The two master storytellers were firing on all cylinders, as the superhero Okada went move-for-move with the flawed but endlessly determined Ishii.  In the end, after an incredible series of reversals, The Stone Pitbull scratched way to an upset win via a Brainbuster. 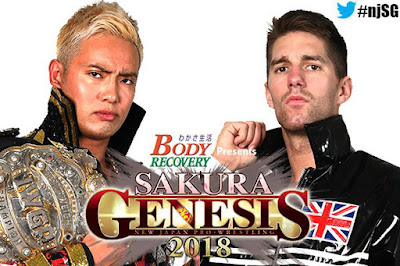 Okada's latest classic took place at this year's Sakura Genesis against British submission wizard Zack Sabre, who'd just come off an insanely good four-match streak in the New Japan Cup tournament (shockingly defeating Naito, Ibushi, Sanada, and Hiroshi Tanahashi).  Sabre had been built up as so deadly that opponents didn't dare go for big moves lest they be countered into pretzel-twisting submissions, or even throw a strike because that would be giving him a limb to bend.  This buildup of the technical master was so well done that Okada was painted as a decided underdog throughout the 34-minute match, being outwrestled and outmaneuvered at nearly every turn.  It was only Okada's herculean will to survive that allowed him to withstand Sabre's stretch-based onslaught, and in the end it took three Rainmaker clotheslines to get the champion out of this particular pickle.  This was, I daresay, Okada's best match so far in 2018 and it also established Sabre as a major main event player going forward. 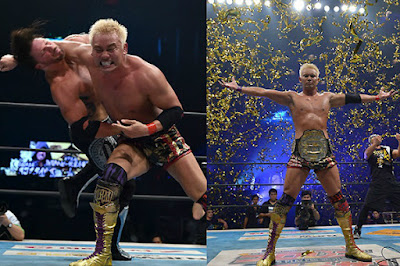 AJ Styles jumped to NJPW in early 2014 and immediately challenged, and defeated, Okada for the IWGP Title.  Okada's Bullet Club-assisted loss was so devastating that his career took on an air of desperation as he struggled to reascend the mountain.  Finally after his heartbreaking loss to Tanahashi at WK9 and a cathartic feud with Bad Luck Fale, Okada was ready to get revenge on Styles in a wrestling clinic on the company's second-biggest show of the year.  Early on Styles' Bullet Club got involved on multiple occasions, but after Red Shoes expelled them from ringside the match settled into a breathtaking example of Styles-Okada storytelling.  Both guys threw every one of their signature moves at each other, and the match culminated in one of the most amazing closing stretches I've ever witnessed.  The counters and reversals on display were truly dazzling, and after twenty-six minutes Okada finally regained the IWGP Title, capping off one of the more emotional Championship quests in recent years. 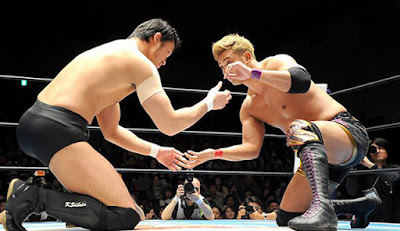 In hindsight one of Okada's most affecting and upsetting matches, the main event of Sakura 2017 was a grueling, at times uncomfortably stiff 38-minute opus, wherein Shibata proved, even in a loss, his hard-as-nails toughness and delivered his greatest (and possibly final) bell-to-bell performance.  This match had everything, from mat wrestling, to big moves to cringe-inducing MMA strikes, and these two threw everything they could at each other, and when it was over, Shibata collapsed backstage and had to be rushed to the hospital.  Okada withstood some of the stiffest strong style offense imaginable, finally putting down his challenger with three Rainmaker clotheslines.  Regardless of its aftermath, this is a stunning IWGP Title match and an all-time classic. 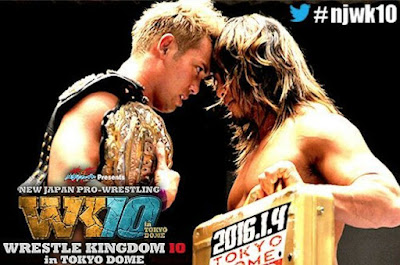 Okada vs. Tanahashi.  One would have to call this the greatest feud in New Japan history (not to mention one of the greatest feuds anywhere).  If Tanahashi is the man who rebuilt New Japan Pro Wrestling, Okada is the man who added the top 20-or-so floors.  This incredible rivalry between the former Ace and the current one spanned five years (and still isn't quite over), delivering classic after classic and showing the rest of the industry how you put on a big-time pro wrestling match.  For me the three best in their series were the dramatic King of Pro-Wrestling 2013 bout, where Tana played the heel and brutalized Okada's right arm, making his Rainmaker clothesline all but useless; the WrestleKingdom 9 epic (my personal favorite) where Okada came within a hair of claiming the mantle of Company Ace, only to leave The Dome in tears; and Okada's epic redemption one year later, as the young champion finally turned back the challenge of his greatest rival and became NJPW's new top star.  There aren't enough superlatives to describe the storytelling magic these two conjure whenever they share a ring, and picking just one match between them to include here would be nigh impossible. Hiroshi Tanahashi has to be considered Okada's greatest all-time rival, but in terms of pure match quality Kenny Omega is the Ric Flair to Okada's Ricky Steamboat.  These two men lit the pro wrestling landscape ablaze on January 4th, 2017 with a 47-minute, three-act masterpiece, shattering conventions and transcending the industry.  Many who watched it, including myself, considered it one of the greatest matches they'd ever seen.  This was the match that broke the illustrious Meltzer rating system, earning ****** (Meltzer had previously awarded six snowflakes to a 1994 Misawa-Kawada match, but it had been 23 years since) and creating a palpable buzz.  The June rematch would top it in the eyes of many (I still prefer the original), lasting an impossibly fast-paced 60-minutes and ending in a draw that left both men collapsed on the canvas.  The story here was that Omega had learned just enough from their first meeting to gut it out and not get beaten again.  Their third and final match (thus far) took place on the penultimate night of G1 Climax 27, a balls-to-the-wall 25-minute action sequence in which Omega took advantage of Okada's weakened neck to eke out his first win in the series and advance to the finals.  With a 1-1-1 record, the Okada-Omega story is clearly not over, but it's obvious that this rivalry/trilogy is a history-making one, and that these two men were made to wrestle each other and defy expectations.