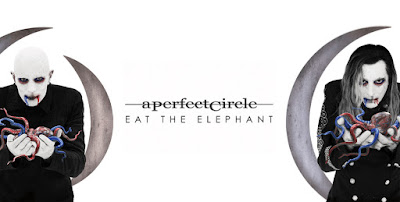 It's strange that A Perfect Circle's previous album, a 2004 collection of cover songs (plus two originals) was called Emotive.  That title would be much more appropriate for their latest release, Eat the Elephant.  I've been a Maynard James Keenan fan for many years now but I can't recall any other recording in which he so plainly wears his heart on his sleeve.  This is a sparse, contemplative album where Keenan's vocals do the vast majority of the sorrowful heavy lifting.

The band seemingly strove to put the listener off-balance from the start, as the opening title track is a deeply expressive, touching piece about being overwhelmed by beginning a daunting task, wrestling with the idea that you just might not have it in you (such as recording a new Perfect Circle album after 14 years away, perhaps?).  This barebones tune instantly caught my ear by being so different from anything else APC has ever recorded (my first thought was "This reminds me of Bowie's "Blackstar"), and by the second listen it became my new choke-up song by dealing with an urgently relatable theme - "Where to begin eludes me/Without you to remind me."

From there the album covers multiple sociopolitical issues, starting with our obsession with electronics and instant gratification in "Disillusioned," a song that points out the irony of a society addicted to cellphones and social media as a way to stay connected, inadvertently resulting in our isolation behind anonymous screens.  "Time to put the silicon obsession down" indeed.

Another socially relevant song, probably the most traditional APC-type song on the album, is "The Doomed," which takes aim at a society that worships wealth while casting aside those in need.  Keenan's disgust comes through in spades here, "Blessed are the rich/May we labour, deliver them more/Blessed are the gluttonous/May they feast us to famine and war."

Two tracks have a decidedly 80s New Wave influence.  The first, one of my favorites on the album, is an upbeat, oddly poignant song about our fascination with celebrities called "So Long, and Thanks for All the Fish," which mentions some of the recent celeb deaths ("Willy Wonka, Major Tom, Ali and Leia have moved on") and in doing so illustrates how strange it is that we mourn people we've never met.  The other New Wave-esque track, laden with keyboard and electronic vocal effects, is "Hourglass," which tears down the destructive, political partisanship currently dividing the country, one of the more nihilistic songs in the band's catalog.

And of course there's the resentful "TalkTalk," bringing to task those who respond to gun violence with "thoughts and prayers" instead of actually doing something about it.  Musically reminiscent of songs like "Judith," this is another dirge lamenting our ineffectiveness in times of crisis - "Try walking your talk or get the fuck out of my way."

Eat the Elephant is an album of musical restraint, heavy on piano and light on big guitar riffs, but with very passionate, idea-driven performances by Keenan and songs that gain power and significance with multiple listens.  The only real misstep on the album for me is the closer "Get the Lead Out," a good, hooky idea for a song that never gets fully fleshed out; it feels like a Nine Inch Nails transitional track.  But the rest of the set delivers quite admirably, setting itself apart from APC's previous albums and providing a slew of very strong songs, if nothing quite on the level of "3 Libras" or "Sleeping Beauty."  This record will stick with you if you let it.

Posted by Justin Enuffa Ballard at 10:41 AM