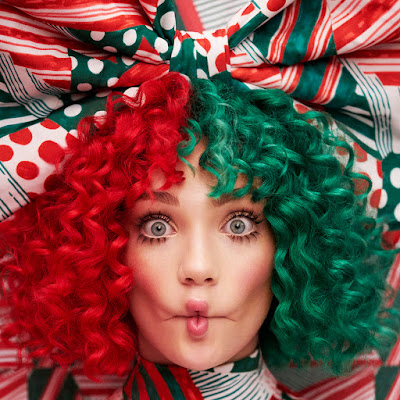 To start, a little something about me: I hate pop Christmas albums.  They generally scream "cynical money grab" and have little to no substance, undermining the joyous, wide-eyed naivete we're all supposed to feel this time of year.  And yet here's Everyday is Christmas, the new album of original Christmas-themed tunes from Sia, to evoke warm holiday spirit and kickstart your yuletide merriment.  And the songs are pretty damn good to boot.

The album's ten tracks are mostly light and fluffy like so much Christmas snow (back when it actually snowed on Christmas), but there are a few piano ballads as well, shades of her Some People Have Real Problems era.  It's nice to hear Sia bring back some of that stuff.

An early standout for me is the Darlene Love-esque "Candy Cane Lane," which features the bounce of "Baby Please Come Home" but also a darkly uncertain chorus for a song of this ilk.  Another is the melancholy "Snowman," whose lyrics seem to suggest a metaphorical love song: "Don't cry, snowman, don't leave me this way/A puddle of water can't hold me close, baby."  My only complaint about this track is its short running time; this is one of those choruses she could get away with repeating several times.  The album's apex for me is the ode to holiday boozin', "Ho Ho Ho," another springy track with another instantly infectious chorus hook.  You may have heard a snippet of this in JC Penney's Black Friday weekend TV ads.  The album peters a little in the second half, peaking with the title track, an oddly minor-keyed love song reminiscent of "Bird Set Free," where Sia proclaims to her love interest that "Everyday is Christmas when you're here with me/I'm safe in your arms, you're my angel, baby."

At 33 minutes, Everyday is Christmas is a quick listen but worthy of multiple spins, as there's enough going on harmonically and instrumentally for new ear candy to reveal itself each time.  It's very telling of Sia's considerable songwriting ability that even an undemanding album like Everyday is Christmas still boasts memorable hooks and quality tunes.  This could've been a total throwaway record of gratiuitous covers just to cash in on the season, but it actually holds up as a solid album.  I don't think this marvelous talent is capable of a bad record.


Thanks for reading - join us on Facebook by clicking HERE