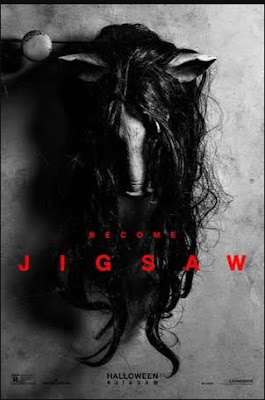 All right, I've said A LOT about these movies in the last month. I had to re-watch 'em all just so I'd be good and prepared for the newest chapter, Jigsaw. So how does it compare to the rest of these flicks?

Eh. It's ok. It's a ton of the same shit that came before. And a lot more convulted-ed-ness (that's a word). John "Jigsaw" Kramer is dead...OR IS HE?!?!? A new group of shmucks are stuck in a new shithole trapped in a situation eerily similar to Jiggy's M.O. Is it him? Come back from the dead?!?!?

We're introduced to a buncha new characters. There's hard-boiled detective Halloran, his partner detective Hunt, medical examiners Logan and ginger Eleanor. And then the whole slew of folk trapped inside of Jigsaw's newest game. I'd tell you their names, but they're completely forgettable.


Without getting too spoilery, these people hafta atone for their past sins by having pieces of their body flayed off. It's fun! While they're all trapped up bleeding everywhere, the cops and the medical folk obviously start suspecting each other as being the new Saw dude because they're the only ones in the movie that could. So a buncha people get hacked up, no one learns a lesson and there's a twist ending with SOMEONE being a murderer type.

Did I like this one? I mean, I like them all, but this one kinda stunk. The problem with this particular episode is it's kinda obvious who's pulling the strings. At least in the other flicks I was sorta guessing what the plot twist was gonna be. When it happens here, it only confirmed my suspicions. There's a point in the movie where they make it quite obvious that the person doing the Saw'ing is the only possible one that could've manipulated everything into place. So without the surprise element, this one's lacking a fundamental Saw piece.

As is par for the course in these movies, the acting is ATROCIOUS. It's as if they went to the closest high schools and hired a buncha failed actors, er, drama teachers. There's quite a few memorable performances in this but only because of how execrable they are. 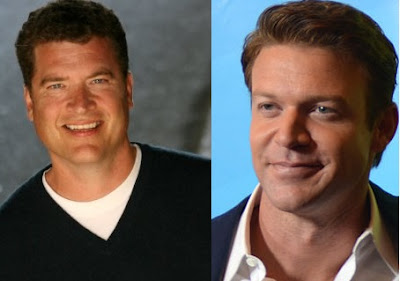 Plus, this guy gives me a real Joe Mayo feeling.
'Hey, can you do me a favor? Can you keep an eye on the corpses? Make sure we have enough?'

All in all, this is probably the weakest of the series, and that's saying a lot, because Saw 3D SUCKED. I think I'm all set with these Saw movies until the next one comes out and I see that and like it but hate it as well. Dammit.