Welcome to another edition of Top Ten Things, here at Enuffa.com!  Today we're talking about The Phenom, The Deadman, The Conscience of WWE, and his greatest bouts at WWE's biggest PPV of the year, WrestleMania! 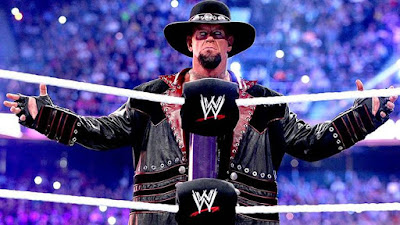 Probably the greatest streak in fake sports was the one held by The Undertaker, a winning streak at WrestleMania that lasted over two decades and led to one of the most shocking moments in wrestling history when it was broken.  What started as an organic bit of booking happenstance evolved into possibly the biggest perennial feature on The Showcase of the Immortals.  Suddenly there was a built-in long-term storyline for one of the top WrestleMania matches every year, and for quite a while Taker's match either stole the show or came damn close.  Even after The Streak was broken by Brock Lesnar, Taker's match would continue to be one of the top featured attractions.

But which of his 'Mania showings stand atop the others?  Here now are, in my estimation, The Undertaker's greatest WrestleMania bouts.... 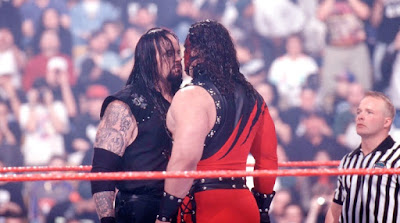 Taker's first great 'Mania bout didn't occur until he'd already established a six-match winning streak (Yes, his 1996 match with Diesel was solid, but aside from that his 'Mania outings up until this point were forgettable at best).  In 1997 Taker was involved in a long storyline arc wherein his former manager Paul Bearer revealed he had a long-lost half-brother named Kane (Ironically Kane was actually Taker's first name when he debuted).  The company built up Kane's first appearance for several months before he attacked Taker during the first Hell in a Cell match, and from then on he was established as an unstoppable monster.  Also to the company's credit, they held off giving away too much physical interaction between the Brothers of Destruction, so by the time this match finally took place it truly felt like Taker would be facing his ultimate adversary.  The match itself didn't disappoint; the two behemoths delivered a very physical fight that Taker was only able to win via three consecutive Tombstone piledrivers.  Even in a loss, Kane was set up as a major star. 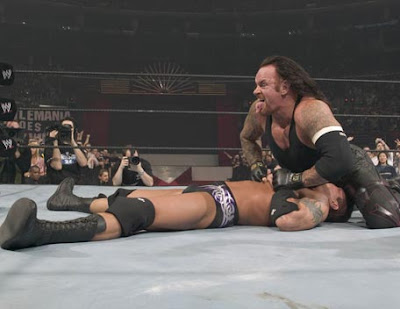 After a serious in-ring slump in 2003-04, Taker was able to return to form in this underrated match with the Legend Killer.  Orton had just finished a horribly failed babyface run in late 2004 and the company wisely turned him heel again, leading to Orton challenging Taker to a Legend vs. Legend Killer match.  These two worked extremely well together, delivering one of the better matches on the card that ended with Taker reversing an Orton Tombstone into his own for the win.  Taker and Orton would go on to have a series of strong matches throughout 2005, in a feud that helped re-elevate Orton. 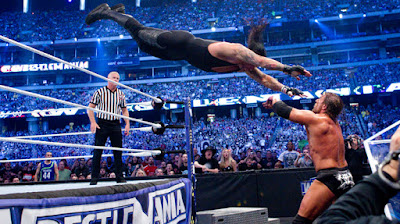 In 2011 both The Undertaker and Triple H returned from a long hiatus.  Taker's return was teased ahead of time, but just as he was about to cut a promo the familiar strains of Motorhead filled the arena, announcing The Game.  The two veterans stared each other down before Hunter wordlessly made a challenge by turning his gaze to the WrestleMania 27 sign.  The match itself, while full of typical No-DQ frills, was a fairly epic, very dramatic WWE-style main event with some great gasp-inducing nearfalls.  Taker finally won with Hell's Gate but was so exhausted he had to be stretchered to the back on a forklift.  But these two would outdo each other one year later, both in terms of storytelling and action. 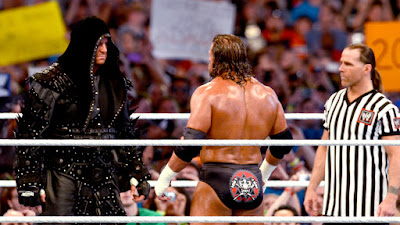 A year after Triple H nearly ended The Streak and left Taker in a broken heap, Taker challenged him to a rematch, which Triple H only accepted after repeated badgering and calls of cowardice.  This time the bout would take place in Hell in a Cell with Shawn Michaels as the special referee.  What followed was an excellent example of pro wrestling storytelling; Hunter beat the bejeezus out of Taker as Shawn looked on in growing dismay, but Taker would not stay down.  After over 30 minutes Taker managed to squeak by with another win, keeping The Streak alive. 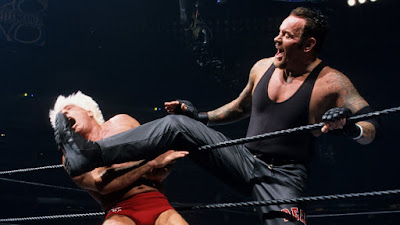 The most unexpected hit from the 2002 'Mania was this amazingly brutal Street Fight.  Taker, then a heel, had assaulted Flair's son David and his best friend Arn Anderson, in an effort to goad the aging former Champion into a fight.  In Flair's first truly good match since his WWF return, he bumped and bled all over the place to make Taker look like a sadistic, unstoppable bully.  The highlight of this match for me was a top-rope superplex that looked as punishing as any I've ever seen.  Flair fought valiantly but eventually fell to BikerTaker, giving the latter his tenth WrestleMania win. 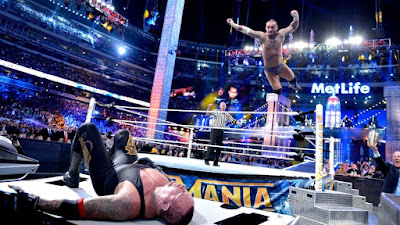 At the infamously dubbed "Rematch-a-Mania" The Undertaker and CM Punk predictably stole the show with a dramatic and memorable 3.5-star bout that, unlike their 2009 series, showed Punk able to hold his own against The Phenom.  Punk felt slighted at not being included in the show's main event, and he and Taker made sure everyone watching would remember WrestleMania XXIX for their match.  While the buildup involved the rather tasteless exploitation of Paul Bearer's recent death, the match delivered big, and for the first time in many years it seemed The Streak might actually be in jeopardy. 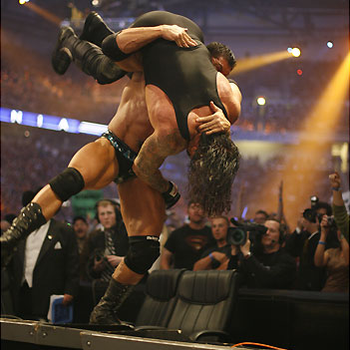 Ten years removed from his previous WrestleMania championship opportunity, The Undertaker cashed in his Royal Rumble victory and challenged World Champion Batista in a shockingly good match.  Both guys had their working boots on and filled their alotted fifteen minutes with brutal big-man spots, the highlight of which involved Batista powerslamming Taker through a ringside table.  This match strangely went on fourth out of eight, but set the bar very high for the second half of the show and kicked off one of the best feuds of 2007. 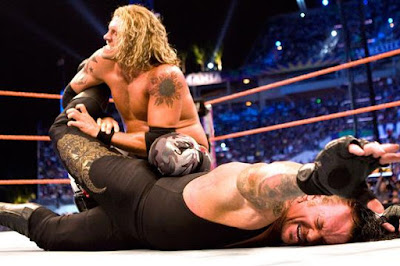 One of the freshest and most exciting Taker matches for me was this main event and near-show-stealer for the World Title.  After two years of being pushed as something of an undeserving main event guy, Edge got to stand toe-to-toe with The Phenom, in an epic finisher-fest that truly made Edge look like a superstar.  There was little doubt that Taker would go over here (had Edge gone undefeated at 'Mania until 2008, that would've added some suspense), but even in defeat Edge showed that he was in Taker's league.  This match fell in the midst of an Undertaker workrate renaissance, as 2007-2010 was one of the best periods of his career. 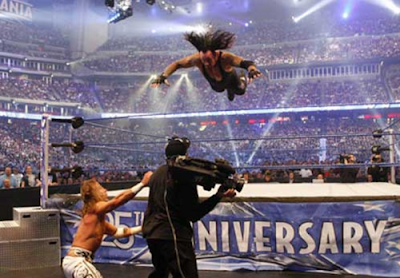 WrestleMania 25 was largely a pretty flat affair but for one amazing standout, a match many consider the greatest in WrestleMania history.  I'm speaking of course about the epic 30-minute war between The Undertaker and Shawn Michaels.  I honestly didn't get caught up in the build for this match (or really anything on this show) and by this point was so fed up with WWE's lack of star-building that I half-expected this to be mediocre.  I was wholly incorrect, as these two legends showed us all how it's done.  This match ended up being one for the ages, featuring death-defying spots from both guys (including a terrifying tope from Taker that resulted in him landing on his head) and multiple dramatic finisher kickouts.  This really should've gone on last, as nothing could possibly have followed it. 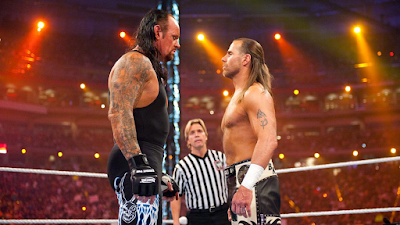 For the second straight year the match that overshadowed the rest of the WrestleMania card was The Undertaker vs. Shawn Michaels.  The angle leading to this match was brilliant, with Shawn wanting redemption for 'Mania 25 and Taker refusing to oblige.  Shawn then banked on winning the Royal Rumble so he could challenge then-World Champion Taker at WrestleMania, only to come up short that January.  Instead Shawn crashed Taker's Elimination Chamber Title defense, costing Taker the belt and drawing the wrath of The Dead Man.  Taker accepted Shawn's challenge on the condition that Shawn would retire if he lost, and the greatest WrestleMania rematch of all-time was signed.  In another case of my underestimating both men, I figured they could never top the 'Mania 25 match and therefore was less than enthused about the idea (again).  Once again I was proven wrong, as Taker-HBK II in my opinion (yes, I know I'm in the minority) surpassed their previous encounter in a streamlined, drama- and action-packed 24-minute masterpiece that echoed not only Taker-HBK I, but Flair-HBK from 2008.  Shawn's defiant throat-slash gesture at the end of the match followed by Taker's enraged Tombstone rebuttal was an all-time classic moment.  For me this is, and likely will always be, The Undertaker's greatest WrestleMania match.