Welcome to yet another edition of Awesomely Shitty Movies, here at Enuffa.com! 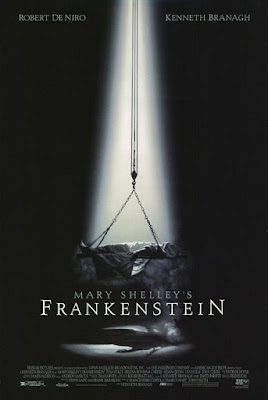 Today's entry is for me one of the great disappointments in cinematic history.  In 1994 Francis Ford Coppola followed up his critically and commercially successful Dracula adaptation with a production of Frankenstein, directed by and starring Kenneth Branagh, with Robert Deniro as the creature.  Like Dracula, Mary Shelley's Frankenstein was an operatic, gritty, almost pulpy screen version of the novel that featured fairly graphic blood and gore, and appealed to the mid-90s culture of excess.  Unfortunately it wasn't nearly as well-received as its counterpart and flopped in the States, though it did pretty well overseas.

Being a huge fan of Coppola's Dracula, I was salivating at the prospect of a faithful Frankenstein adaptation, and for a solid five years I tried to convince myself that this film worked.  But it doesn't.

So what went wrong?  How did such a promising endeavor fail to connect with its audience?  Let's take a look....

In an odd bit of casting against type, Robert Deniro was tapped to play the reviled, misshapen creature, and even stranger, his character/performance is the most understated and relatable.  In a film where almost everyone has comically histrionic moments of distress and anguish, Deniro oddly provides an anchor, portraying the creature as a misunderstood brute who is pretty gentle by nature until pushed too far.  Despite having to act through heavy makeup, Deniro, like Boris Karloff in the 30s, was able to convey a wide range of emotions and make us care about him.

She's asked to go a bit over-the-top occasionally (to go along with her absurdly large hairstyle), but overall Carter's performance as Victor's fiancee Elizabeth is tender and nuanced, making the romantic elements of the story ring true even as the rest veers into parody.  She comes across as a strong 90s cinematic love interest while staying true to the period setting.

It's a shame Cleese's role as Professor Waldman is so limited, because I found his restrained delivery quite engaging.  Sporting a dental appliance and gravely voice, Cleese is almost unrecognizable as Frankenstein's inspirational professor, who gets as close as anyone to creating life only to back away in horror at the last minute.  This is a rare glimpse of Cleese's dramatic skills as an actor and I would've loved to see more.

The Frankenstein monster as described in the novel was pieced together from various corpses and appeared so hideous its creator fled in revulsion.  While the makeup in this film doesn't much resemble Shelley's description, the effects department came up with a suitably ugly countenance for the character, with stitching across his face in multiple directions and limbs clearly taken from different bodies.

The middle third of this film mostly deals with the creature's exploits after Victor's desertion, following him to a small hut where he hides and observes a family of farmers.  He spends months learning to speak and read, and begins helping with daily chores, unbeknownst to his hosts.  This is the only segment of the film where any measure of subtlety is employed, and it's a welcome change from the noisy first and third acts.  Since Deniro's performance is the movie's biggest strength it stands to reason that it works best when he's the main focus.

Kenneth Branagh is a fine, accomplished actor....as long as someone else is directing him.  As a director he has little self-discipline; every big scene is dialed up to eleven, and thus most of the performances are too.  Almost none of the human characters come off as realistic people because they spend so much time yelling and running toward the camera.  Branagh's delivery is so hammy and overly theatrical it becomes funny at times.  Like when he introduces himself to Robert Walton: "My name....is Victor......................................Frankenstein."  He says it like Walton is supposed to recognize the name.  But the line's only delivered that way because WE know who that character is.  So many moments in this film feel like they belong in an Ed Wood picture, or a parody of a Frankenstein movie.

If the performances are belabored in this film, that's nothing compared to the tone and visuals.  There are so many swirling, sweeping camera moves you feel like you're on a roller coaster (particularly when Victor slides through the ice tunnel).  Everything has to be as BIG as possible.  The creation sequence in the novel for example was very understated and the details of how the creature was animated were left vague.  Here the sequence involves a giant, wheeled sarcophagus on a dolly track, various electrical instruments (Can't have a Frankenstein movie without some nod to Kenneth Stryckfaden, can we?), and electric eels.  ELECTRIC EELS, for Chrissake!  Justine Moritz's hanging was changed from an official death sentence ordered by a judge to a high-wire lynch mob sequence (during which someone actually says "This is a lynching mob!" - oh really, ya think so Professor??).  I guess the execution of these scenes in the novel was too tame for us drooling blue-collar moviegoers?

Aidan Quinn is so bad in this movie.  Like, Saturday morning cartoons bad.  I dunno if it's his fault or if Branagh kept telling him "Faster, more intense" and then used the worst takes.  But Jeezus his performance here is embarrassing.  Amateurish even.

I say again - ELECTRIC EELS.  Also the rhythm of this sequence after the creature comes to life is totally contrived.  Victor thinks the experiment didn't work ("LIVE! LIIIIIIIIIIIIIVE!!!!  Noooo!!  NOOOOOOO!!!"), then the creature's hand moves, thumping against the sarcophagus porthole (Why the hell is there a porthole?), and he starts writhing around inside, rocking the container back and forth.  We get the obligatory "It's alive" line, and Victor opens the lid.  Then nothing happens.  Then the creature bursts out just so we can have a false jump-scare.  And then we get an awkward series of jump cuts as Victor tries to get this moron to stand up on his own, and both of them slide around in a puddle of amniotic slime, making this moment unintentionally funny instead of disturbing or whatever it was supposed to be.

Literally every time the creature shows up unexpectedly there is a lightning strike.  I shit you not.  How Branagh thought this was anything but hilariously awful is beyond me.  This is right out of a Mel Brooks movie.  IT'S NOT EVEN RAINING!  Fuck right off with this.

Patrick Doyle's score is terribly distracting, largely due to there being music ALL OF THE TIME.  At a certain point the music ceases to heighten the mood and instead feels like it's there to create drama where there isn't any.  We're not watching a silent movie - there doesn't need to be music over literally every scene.

Since this is a movie adaptation they just had to change some shit, most of it for no reason.  I mentioned Justine's hanging earlier, and this new version of the scene is laughably obtuse.  Other examples include Henry Clerval not being killed off, even though he doesn't affect the story in any way after his death should've happened; Dr. Waldman's brain being used for the creature, even though said brain carries no memory of his prior relationship with Victor; the fateful Victor-creature meeting being a pre-arranged one in an ice cave instead of the creature surreptitiously following Victor into the mountains and asking to speak with him in a hut; and of course the "bride" payoff, where instead of destroying the intended "bride" before its completion, Victor reanimates Elizabeth's head on Justine's body and there's a weird, off-putting climax where he and the creature fight over her before she lights herself on fire.  I didn't prefer any of these changes to their counterparts in the novel, and the filmmakers should've just remained faithful to the source material instead of trying to reinvent the wheel.

-How does Victor's mansion burn to the ground when it seems to be largely made of marble?

-I like the creature design, but some of the stitching doesn't make a whole lotta sense.  The creature has eyes from two different donors, but why is the skin from around one eye also sewn in?  Did the filmmakers think the audience was under the impression that eyeballs are built into the surrounding tissue?

-Again, ELECTRIC GODDAMN EELS.  Where the shit was Victor supposed to have acquired these things?

-So the use of Waldman's brain didn't result in him remembering Victor or anything else in Waldman's past, but the reanimated Elizabeth remembered Victor and even knew how to say his name within minutes of being brought back to life.

-Also why was her eye all screwed up?  The creature ripped her heart out, he didn't punch her in the face.

The person I really feel bad for here isn't Victor, it isn't Elizabeth, and it isn't the creature.  It's Frankenstein's screenwriter Frank Darabont.  The same year this mess of a film was released Darabont also unveiled his now-classic adaptation of The Shawshank Redemption, and considering how fantastic that film is, I can only imagine what could've been with this film.  Darabont himself has an interesting opinion of Branagh's effort:

It’s kind of like the movie I wrote, but not at all like the movie I wrote. It has no patience for subtlety. It has no patience for the quiet moments. It has no patience period. It’s big and loud and blunt and rephrased by the director at every possible turn. Cumulatively, the effect was a totally different movie. I don’t know why Branagh needed to make this big, loud film...the material was subtle. Shelley’s book was way out there in a lot of ways, but it’s also very subtle. I don’t know why it had to be this operatic attempt at filmmaking. Shelley’s book is not operatic, it whispers at you a lot. The movie was a bad one.

That sums it up pretty well I'd say.  I wish I could see a version of this film directed by Frank Darabont, as it would almost certainly put Branagh's to shame.


That about does it for this week's ASM.  Comment below with your thoughts, and stay tuned for more film examination at Enuffa.com!


Posted by Justin Enuffa Ballard at 8:48 AM