Welcome to another Frankenstein-related Awesomely Shitty Movies, here at Enuffa.com!  Continuing with the Universal Studios franchise, we've arrived at the first cross-over film in the series, Frankenstein Meets The Wolf Man, starring Lon Chaney Jr and Bela Lugosi.  If you missed our Ghost of Frankenstein review, click HERE. 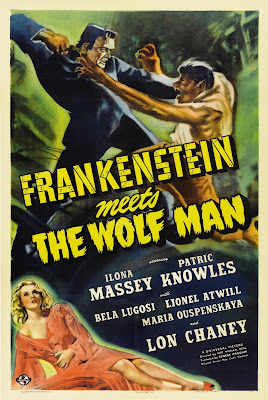 FMTWM served as both a continuation of Ghost of Frankenstein (review HERE) and the 1941 classic The Wolf Man, and the studio wasn't coy about the two characters' eventual showdown.  The story here finds The Wolf Man Lawrence Talbot accidentally brought back to life and searching for a way to kill himself.  His travels take him to the old Frankenstein castle, where the monster is somehow still alive.  This barebones plot is just a way to get the two monsters in the same room so they can fight.  Not unlike a certain DC Comics crossover film released a few years back....

Anyway, there is unabashedly little substance to this movie but the filmmakers at least found ways to make it visually engaging, and its 74-minute running time flies by.  So let's take a look at the pluses and negatives of Frankenstein Meets The Wolf Man....

Frankenstein Meets the Wolf Man, despite its obvious status as an early schlock film, is actually pretty visually stunning, in part due to extensive Dutch angles to create a sense of being off-balance.  Unlike Ghost, which featured flat angles and drab cinematography, the filmmakers here made a conscious effort to at least draw the viewer in with the visuals.

In the same vein, this movie has a distinctly Expressionist look, with intense shadows that add to the gothic flavor.  There may be very little going on plot-wise, but this is damn sure a fun movie to look at.

Another visual plus, the frame frequently has objects placed in the foreground, such as railings, furniture, lamps, etc. to add some interesting geometry to the shot, making otherwise dull expository scenes come alive and keep our attention.

The first half of the film plays as a direct sequel to The Wolf Man, with Lawrence Talbot somehow being resurrected as two grave robbers accidentally remove the wolfsbane that had been keeping him inert.  He turns back into the werewolf and escapes, gets admitted to a hospital, and escapes again looking for a way to die so his curse won't harm anyone else.  This is all pretty silly and the story falls apart in the second half, but as a sequel to The Wolf Man, a fairly goofy film in its own right, this worked for me.


Now for the stuff I couldn't forgive....

I'm not sure why, but Jack Pierce's werewolf makeup just didn't look as believable this time around.  Maybe the shooting schedule or the budget wouldn't allow Pierce to nail the execution, I dunno.  But the makeup just looks kinda chintzy in this film.

Bela Lugosi was the studio's first choice to play the monster in the original Frankenstein, but he turned it down due to the extensive makeup involved and the fact that the character had no pathos in the original script.  But four movies later the studio finally got Bela into the costume, in a rather poetic nod to the conclusion of Ghost of Frankenstein, where Ygor's brain is transferred into the monster's body.  It's a patently absurd touch, but in an odd way rather satisfying.  Unfortunately Lugosi just looks wrong as the monster, and thanks to studio meddling the storyline justification for his casting is completely excised from this film.  The monster was supposed to have Ygor's brain and voice, and had lost his eyesight during the operation, but the studio hated his performance and ordered the removal of all his dialogue and the fact that he was blind.  Thus the monster has precious little screen time and inexplicably lurches about with his arms outstretched.  Lugosi was also not physically up for much of the strenuous work, and a stunt double was used for several of his scenes.

For the third straight movie the climax involves some doctor who isn't Henry Frankenstein attempting to revive the monster and make him stronger.  And in this case it's Dr. Mannering, who had treated Talbot earlier in the film.  Initially his plan is to permanently drain the life from both Talbot and the monster, but then despite having no emotional attachment to the monster he decides he must see it at "full power."  The monster of course breaks loose, a full moon triggers Talbot's transformation, and the titular monster fight breaks out for about two minutes.  Then one of the villagers blows up a nearby dam, causing the Frankenstein castle to be flooded, and sweeping the two monsters away.  I guess silver doesn't kill the Wolf Man but drowning does (Eh, who are we kidding, he'll be back again next year)?  All this crap about a doctor hooking the monster up to electrodes in the hopes of "healing" him got real old in Son of Frankenstein, and I certainly didn't need to see it twice more.

Look, we knew going in these two monsters were gonna fight.  It's right there in the title.  But the filmmakers didn't even have the discipline to build up to Talbot's first transformation - he's covered in fur not two minutes after his body is first reanimated by the robbers.  You gotta tease the audience a little so the eventual payoff feels earned, man!  It's called foreplay I believe....

-This bugged me immensely in the first Wolf Man film, and they do it again here.  The Wolf Man is always wearing the same shirt and pants, regardless of what Talbot was wearing at the moment of transformation.  I get that the two scenes are shot at different times, but for fuck's sake can ya not check the dailies to make sure the clothes match?  What, did the hairy beast put on a sensible button-down in case it got a little chilly out?

-During the scenes covering Talbot's journey across Europe the studio inserted blatant stock footage of carriages and roads, and it was quite comical.

-The Frankenstein lab is once again totally different from the previous film, plus this time it's next to a dam.  The lab locations in these stupid movies just keep getting moved to wherever the script needs them to be so they can be destroyed at the end.

-Why does everyone always assume anyone named Frankenstein knows the secret to every bizarre scientific phenomenon?  "His dad made the monster so he must know how a werewolf can be killed, right?"

-By the same token, how would Dr. Mannering know what to do with all this?  What, anyone with a medical degree of any kind is an expert on man-made people?

-Also judging from how much stock these fools put into Ludwig's notes you'd think HE created the monster, when all he did was try to revive him a while back.

-The angry mob shows up almost immediately once the monster's presence is discovered.  Well, that escalated quickly.  Buncha real reactionaries in this town....

-Late in the film Dr. Mannering manages to track down Talbot in the village of Vasaria and attempts to persuade him back to London and continue treatment.  Mannering at one point says, "You're a murderer," to which Talbot replies, "Prove it."  This twenty screen minutes after Talbot failed to convince Mannering and the other doctors that he is in fact a murderer.  Was the director not present when they filmed the earlier scene?

Look, FMTWM is a THOUSAND times more fun than Ghost was, but man is it terrible.  Crossover films are usually cheeseball tripe, and this began the glorious tradition of monster mashups (and later superhero mashups).  Fortunately though this movie has a ton of eye candy (in the cinematic sense, keep yer pants on) and it makes otherwise hackneyed material kinda fun to sit through.  This is nowhere near the original Frankenstein trilogy but it's most assuredly a step up from Part 4.


Well that wraps up this ASM - comment below with your thoughts, and keep checking back for more movie stuff (and more) at Enuffa.com!

Stay tuned for our House of Frankenstein installment....

Posted by Justin Enuffa Ballard at 8:57 AM