So, TLC 2016, huh?  How 'bout it?  What we saw last night was essentially one of the old In Your House PPVs, with an extraordinary main event, a couple pretty good undercard matches, and some filler.  Nothing offensive and the show moved along swiftly, but overall just an okay PPV. 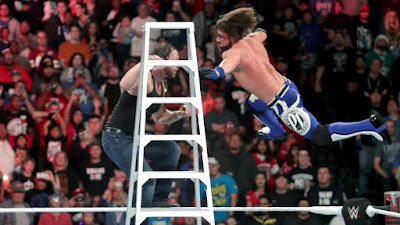 The proceedings unexpectedly kicked off with the Tag Title match, as Bray Wyatt and Randy Orton made pretty short work of Rhyno & Heath Slater.  The announcers weren't even trying to hide how long the odds were against the Champions and for the first few minutes I thought they might actually retain; usually when the announcers clearly favor someone they lose the match.  The action was fine but this wasn't long enough to mean much beyond the Title change.  There was a nice moment where Orton took a bullet for Wyatt and then Luke Harper at ringside took a Gore for Orton.  This established a clear pecking order within the Wyatt Family and it'll be interesting to see where this goes.  The crowd was into this and it turned out to be an easily digestible opening match. 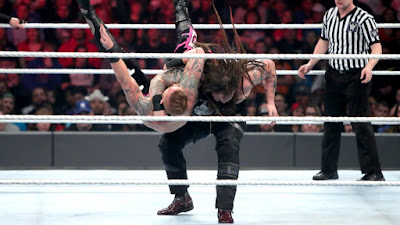 Next was Nikki Bella vs. Carmella, which was easily the weakest match on the card but still felt like a pretty realistic, messy fight.  Nikki had her hair done in tight braids, a la the female UFC fighters.  Nice touch.  Carmella is still illustrating that she was called up too soon but she did take some pretty stiff shots, in particular the spot where Nikki kicked her from behind into the dasher boards.  Nikki eventually won with the new Rack Attack (This name makes no sense for this move by the way - the original Rack Attack was a Torture Rack Drop, while this one is just Marc Mero's old TKO), after emptying an entire fire extinguisher on her.  Not a great match but it did fit the storyline pretty well and the animosity came across.

The first semi-standout of the night was third, as Dolph Ziggler got one more Intercontinental Title shot against The Miz.  This ladder match felt pretty sluggish for the first fifteen minutes or so, like neither guy quite knew what to do with themselves or the gimmick.  Fortunately they clicked during the final ten minutes which made up for the rest of the match.  Miz worked over Ziggler's knee, at one point slapping on a Figure Four THROUGH the ladder, which looked excruciating.  Miz then got his own knee blown out after falling off a ladder.  It then became a battle of one-legged guys and the drama ramped up.  Miz eventually got the win after kicking Ziggler in the groin while Dolph was straddling two ladders (a fairly convoluted spot but it worked).  Miz cut a promo on Daniel Bryan afterward and I can't help wondering if Bryan will come back for one more match at 'Mania.  Seems like Miz is wasting a lot of energy otherwise, unless Bryan's gonna call up a surrogate from NXT or something. 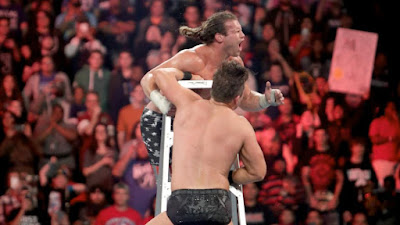 The surprise hit of the night for me was next, as Baron Corbin faced Kalisto in a Chairs Match.  Now this is in general one of the stupidest gimmick matches ever created, but holy crap did these two make it work.  I was shocked at how much fun this match was.  They didn't need to rely on dangerous head shots or anything but still managed to make the action look brutal.  Kalisto put on a star-making performance, bouncing around like crazy and actually dominating much of the action.  The fact that the announcers spent more time talking about him despite his loss should be a good indicator that his push isn't over.  Corbin looked better here than I've probably ever seen him (which frankly isn't saying much, but still), taking some pretty nasty spots to create suspense that he might lose.  He eventually countered a Kalisto high cross-body with a chair-assisted clothesline (great-looking spot) before hitting End of Days onto a pile of chairs.  Easily the best Chairs Match they've ever done. 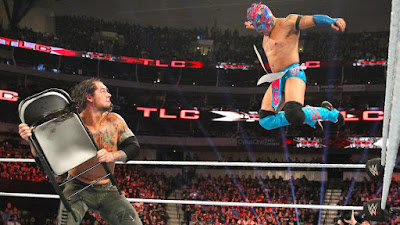 The semi-main event slot however was pretty disappointing.  Becky Lynch defended the Women's Title against Alexa Bliss in a fairly awkward Tables Match.  Here's another gimmick match I generally hate.  This only ever made sense when the Dudleyz were in the company and it clearly needs to be retired.  Becky and Alexa did with this concept what they could, but the bout pretty much devolved into clumsy table setups and the teasing of big high spots that couldn't happen given the rules of the match.  Finally Alexa surprised Becky by powerbombing her off the ring apron through a floor table.  I'm not crazy about this title change, as Becky only won the belt in September, the same night Heath Slater and Rhyno won theirs.  The difference is Slater & Rhyno were underdogs and really shouldn't have a long run, whereas Becky is easily one of the top two talents in the Smackdown Women's division.  I'd have preferred a lengthy reign for her.  Anyway, this match was not great.

The main event was however.  Jeezus, I haven't seen a match this violent and shocking in literally years, certainly not in WWE.  Maybe Edge vs. Mick Foley was the last one, and that was full of blood n' guts.  For a PG Era match this was an insane war.  Dean Ambrose spent most of the first ten minutes beating the everlovin' shit out of AJ Styles.  This felt like Jon Moxley territory as Ambrose whipped AJ all around the arena.  About halfway through the match they did a pretty frightening spot where Ambrose had set up four chairs, picked AJ up for a vertical suplex, and instead flipped him back-first through the chairs.  So almost like a suplex into a power bomb.  That one made me cringe and also ripped an unfortunately-placed hole in AJ's tights (Ambrose later audibly joked to AJ that he could use a pair of shorts).  Later Ambrose hit an elbow drop off a ladder through a table, which also looked quite brutal.  But the showstopping spot was where AJ laid Ambrose across a ringside table and then crushed him with a springboard 450 splash off the top rope to the floor.  As AJ was setting this up I thought "Wouldn't it be cool if he did the 450 from there - that'd never happen though, he'd kill himself."  There have maybe been a dozen spots over my thirty-year tenure as a wrestling fan where my jaw has dropped and I've sat there stunned for minutes.  Diesel powerbombing Shawn through a table in 1996, Mankind's two Hell in a Cell bumps in 1998, multiple spots in the original TLC matches in 2000-01, etc.  This was one of the goddamndest things I've ever seen and I was left wondering if AJ will get fined for doing something so dangerous in 2016.  Anyway, AJ went to climb the ladder and retrieve the belt but then the stupidest booking ever happened and almost derailed the whole match.  James Ellsworth showed up and AJ actually stopped what he was doing, despite having the match won, so he could injure Ellsworth again.  Ambrose broke it up, knocked AJ out of the ring and went to climb the ladder himself, before Ellsworth turned on him and pushed the ladder over, sending Ambrose through two tables.  AJ got back in and grabbed the belt to retain.  Now, there are two storyline possibilities here.  Either AJ and Ellsworth planned this, in which case it makes no sense for Ellsworth to interfere when AJ has the match won (If Ellsworth is clearly helping AJ he'd show up when Ambrose is about to win); or Ellsworth made the decision to help AJ without AJ's knowledge, in which case, again it makes no sense for Ellsworth to interfere when he did.  I guess a third possibility would be that Ellsworth initially intended to help Ambrose and changed his mind, but what sense does that make? 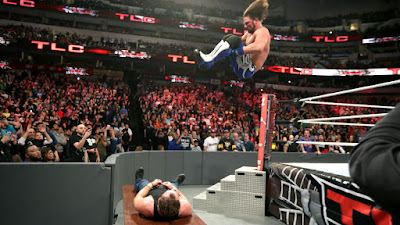 Here's how it should've gone down (if Ellsworth's presence is even necessary, which it isn't): AJ hits the 450 on Ambrose and both guys are laid out for a while.  Then AJ slowly crawls into the ring, sets up the ladder and begins to climb.  Ambrose miraculously gets to his feet, slides in, and climbs up the other side.  Ellsworth comes to the ring as the two competitors are trading punches on top of the ladder.  Ellsworth yanks AJ by the leg and he falls down the ladder, making it look like Ambrose is about to win.  Then Ellsworth shoves the ladder and Ambrose goes crashing through the tables.  Ellsworth helps AJ to his feet and AJ climbs up to win.  Doesn't that make way more logical sense?

Regardless this was an incredible main event worth going out of your way to see.  The rest of the show was middling, though I'd say Corbin-Kalisto is worth checking out too, and to a lesser extent the Miz-Ziggler match.

Two things about the show not related to the wrestling: Smackdown's announce team is a chore to listen to.  I like Mauro a lot, but he's saddled with JBL who says the same Vince McMahon-fed shit every night, and David Otunga, who is Jonathan Coachman-bad on commentary.  Literally everything Otunga says sounds like he's reading it off a script, even when it's an immediate reaction to what's happening.  Just terrible.  The other, newly-minted annoyance is that now whenever they show a replay of a move, they follow it up with a fan reaction shot.  Whose goddamn idea was this?  Yeah, let's extend the replay clips and further distract from the live action by showing barely-engaged fans smiling at something brutal that just happened.  Way to further undermine the illusion that wrestling is real, guys.

So overall TLC was a middle-of-the-road show.  One great match, two good ones, three filler matches, and nothing bad.  AJ Styles is super-fucking-human.  That's really the moral of the story, kids.

Best Match: AJ Styles vs. Dean Ambrose
Worst Match: Nikki Bella vs. Carmella
What I'd Change: Keep the belt on Becky, remove the Tables stipulation and just let her and Alexa wrestle, and leave out the James Ellsworth shit.
Most Disappointing Match: Probably Miz-Ziggler given how high my expectations were.  This wasn't nearly as good as their No Mercy match.
Most Pleasant Surprise: Baron Corbin vs. Kalisto
Overall Rating: 6.5\10
Posted by Justin Enuffa Ballard at 10:02 AM