Sigh.....welcome to another edition of Awesomely Shitty Movies, here at Enuffa.com.  Today we look at the moment when Universal's Frankenstein franchise took a screeching 90-degree turn and went tumbling, ablaze, off a cliff into the night.  That moment when the studio ceased making top quality films about everyone's favorite flat-headed clod and transformed him into a mindless B-movie ghoul.  That's right, I'm talkin' about Ghost of Frankenstein....  (Click HERE if you missed Son of Frankenstein) 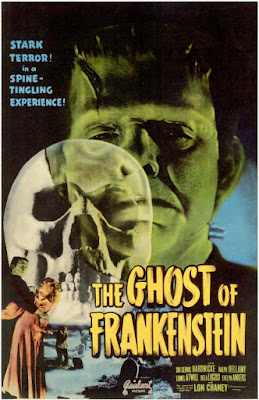 When Son of Frankenstein was another smash-hit, Universal realized there was still a ton of money in these movies and began churning them out at a rapid-fire pace, without paying attention to the annoying little details like story, characters, acting, or in this case visual style.  Ghost picks up the story shortly after the events of Son, where the villagers of Frankenstein are still angry and hysterical because the apparent death of the monster hasn't magically fixed all their woes (Kinda like with American politics).  They believe the monster might still be alive, not to mention Ygor (Good guess), and it's kept them under a curse.  The mayor eventually gives in to their badgering and greenlights their plan to destroy Frankenstein's castle (Because apparently the authority figures in this town are cool with rioting).  As they smash and burn the castle, Ygor stumbles onto the preserved monster, embedded in a block of solidified sulfur.  He breaks free and Ygor takes him to the village to find Wolf Frankenstein's brother Ludwig, also a scientist who might have the secret to restore the monster to his former glory.  Here we go again.....

Bela's back as Ygor, and despite being directed to play the character completely differently than before, he gives another solid turn as the villainous hunchback, manipulating both the monster and the scientists to bend to his will.  No matter how cheesy and low-rent the movie, Lugosi's presence is always a welcome one.  Just ask Ed Wood.

After a pretty tedious, meandering hour, it all comes down to Ludwig's decision to take out the monster's criminal brain (Remember that from the first movie?) and put in a healthy one.  Unfortunately though, Ygor has convinced his assistant Dr. Bohmer to substitute Ygor's brain, which will allow him to live in a strong, healthy body instead of his current mangled form.  Ludwig unwittingly puts Ygor's brain in the monster's head and revives him, and the monster begins triumphantly speaking in Ygor's voice.  But just then he discovers his eyesight is failing due to Ygor not having the same blood type as the monster.  Yeah this is all pretty goofy, but it's kind of a cool, disturbing plot twist for this series and I would've liked to see where they took this storyline.  Problem was, in Frankenstein Meets the Wolf Man the studio hated Lugosi's performance as the monster and cut all his dialogue, removing any references to this scene, including the monster's blindness.

Seriously, I think that's all I really liked about this film.  I should've put the Awesome in parentheses I guess.

Lon Chaney was a terrible monster.  First off, his face is physically all wrong for this character as established in the first three films.  Karloff's face was thin and cadaverous, Chaney's was fat and featureless.  Second, Chaney is silent the entire film, even when the monster gets upset.  No grunts or growls at all.  In fact he makes not a sound until after Ygor's brain is inside and he speaks with Lugosi's voice.  He's basically a robot for most of the film and despite attempts by the screenwriter to inject pathos, we feel zero for the character now.  Terrible casting, and if it weren't apparent before how integral Karloff's portrayal was to these films, it certainly is now.  Don't quit your Wolf job, Lon!

What once fell into the Awesome category is now a negative.  The lighting in this movie is pretty flat and boring compared to the first three.  No expressionist influence here.  Most of the camera angles are very traditional and safe - they show what's happening in the scene and nothing more.

Henry Frankenstein has ANOTHER son?  And he's also a scientist?  And he's also got the secret to "fixing" the monster?  Get the fuck outta here with that tacked-on shit.  Furthermore, the Ludwig character, played by Cedric Hardwicke, isn't interesting, or heroic, or particularly evil.  He's just a warm body to try to repair the monster.

Son of Frankenstein was the final film in this series to be treated and presented as a quality production.  After the departure of Boris Karloff in the role, the studio simply started whipping up B-movie tripe that happened to include the Frankenstein monster.  And from the acting to the recycled story elements to the unimaginative cinematography, Ghost certainly fits that description.  There's barely an attempt at a cohesive narrative; it's just an excuse to get an actor in monster makeup to lumber around and have a buncha shit hooked up to him in a lab.

-Ygor's makeup is fairly half-assed in this movie compared to Son.  Why doesn't he have a dental appliance anymore?  What'd he get his teeth fixed between films?  Does the village of Frankenstein have a good orthodontist?  Also Ygor now speaks perfect English, where in Son he spoke in fragments and was barely intelligible.  I guess he subscribed to Duolingo?

-The actors who played Vogel and Maria's dad in the original, and were back as villagers in Son of Frankenstein, are back at the beginning of Ghost, despite having been murdered in the previous film.  Holy shit with the disregard for continuity....

-Lionel Atwill is back, but as a different character.  And he'd be back again in the next one.  Lotta recycling of actors in this series.

-How exactly did the monster get clean after escaping from the solidified sulfur pit?  And what happened to his fur vest?  And why are his clothes now completely undamaged?  Does the village also have a tailor who specializes in oversized suits and asphalt spreader boots?


-So lemme get this straight - Ygor blackmails Ludwig into healing the monster by threatening to divulge to the town all the stuff his father and brother did to create/heal the monster previously (Nevermind that the town already pretty much knows this stuff).  Umm, Ygor is a reviled criminal whom the town still presumably wants to hang again - would anyone really put stock into anything he says?

-Later Ygor promises to help restore Bohmer's reputation if he agrees to put Ygor's brain in the monster.  Again, who is Ygor that he would have any kind of clout?  He's a deformed grave robber who escaped a death sentence.  Pretty sure no medical organization would listen to him, particularly if he's in the body of the monster.  Is he planning on strangling the medical board until they reinstate Bohmer?

-The scene with the monster chained up in a courtroom is just a ridiculous image.  "Tell us, in your own words, what happened with the little girl."  "ERRRGGGHAAAAHHH!!!"  "Permission to treat this 'man' as a hostile witness?"


-Why do the villagers not seem to know who the monster is when he's brought in for questioning?  They spent three movies hunting him down and trying to kill him, and at the beginning of this film they talk about how the monster's existence has put a curse on the village.  Surely they know at least vaguely what he looks like.

-How does the monster recognize Ludwig?  He's never met the guy before.  Do all Frankensteins give off an "asshole" aura?

-When Ludwig takes the monster back to his lab, unconscious, he spends an inordinate amount of time studying its shoes.  Just long enough for the monster to wake up and break his bed straps.  Maybe have Ludwig turn his back to check on the instruments or something?  Jeezus, who blocked this scene, Ed Wood?  (Damn, that's two Ed Wood mentions.)

-Ludwig has hallucinations of his father's ghost, in which Henry is played by a different actor, despite earlier flashbacks involving clips of Colin Clive.  Did the filmmakers assume the audience has a short-term memory limit of 12 minutes?

-The lab equipment is so chintzy-looking in this movie compared to Kenneth Strickfayden's it's actually laugh-inducing.  Strickfayden's didn't exactly look practical but at least it was convincing.  This lab looks like Spencer Gifts was in charge of sets and props.

-Ludwig's completely legitimate sanitarium/hospital has a dungeon under it?  Ok then, I'll buy it.

-The angry mob wants to storm the lab and kill Ludwig and the monster, and the local law enforcement officer (Ralph Bellamy in a pretty embarrassingly bad performance) tries to protect him.  This seems familiar.  Oh, and he says to the mob before entering the building to intervene, "If I'm not back in five minutes, do whatever you want."  Really?  So vigilantism is ok as long as the police can make a barely concerted effort first?

-Bohmer gets electrocuted when he's shoved gently by the monster into one of the lab instruments.  That's a horribly unsafe lab.  How do they turn the thing off then?


-The monster is seemingly destroyed in a fire, AGAIN?  This might be the greenest movie franchise in history, what with all the RECYCLING.  Get it?  Also we see the monster's skin melting and peeling off his face.  Remember that for the next film.

Ghost of Frankenstein is the first entry thus far in this series that was actually difficult to sit through, and it's only 67 minutes long.  There are no characters to identify with, the storytelling is sloppy and incoherent, and the screenwriters didn't even try to hide the fact that it was a retread.  It was clearly a cheap cash-in on the success of the previous films using two well-known horror stars, despite one of them being totally unsuited for the role.  And the movie doesn't even earn any style points, unlike say, Frankenstein Meets the Wolf-Man (more on that soon).  The cinematography is totally flat and nothing is presented in an aesthetically pleasing way.  Just absolute drivel, this movie.


That'll do it for this edition of ASM - tune in for a closer look at the next installment when the monster fights another monster in the first-ever crossover film....


Posted by Justin Enuffa Ballard at 8:43 AM