Welcome to the third Awesomely Shitty Movies piece dedicated to the Universal Studios Frankenstein series!  In case you missed part 2, check it out HERE.  Today we're talking about the third film in the franchise, Son of Frankenstein! 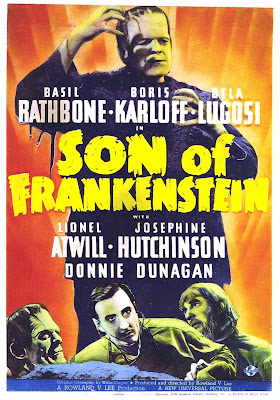 After the critical and commercial triumph that was Bride of Frankenstein, it seemed like another sequel would be a natural.  But Carl Laemmle Sr and Jr were soon forced out of the company due to their extravagant spending, and it seemed monster movies were off the table as well.  It was only due to an LA theater reviving Dracula and Frankenstein as a double feature, and the ensuing huge box office success, that the studio opted to jump back into that pool.  James Whale was not interested in returning however, and Rowland V. Lee was hired to direct the third film.  Son of Frankenstein was originally to be shot in color as well, but the monster's makeup didn't look quite right, so that plan was scrapped.

Son of Frankenstein was another box office success and helped pull Universal out of its financial slump.  Following this movie the studio began churning out cheesy Frankenstein sequels and crossovers, making Son the last serious entry in the series.

So what worked and what didn't?  Let's take a gander...

This series thus far has been full of rich, expressionist lighting, off-putting Dutch angles, and an emphasis on intense lights and darks to plunge the viewer into this bizarre world.  Son of Frankenstein continues this trend and in some ways takes it a step further, with some of the sets including angular, surrealistic staircases that cast jagged shadows on the walls behind.  Almost every set in fact has bare, textureless walls so the shadows can come across more strongly.  More on that aspect a little later.  The Film Noir genre was just beginning to blossom at this point, and many of those films must've taken some visual cues from Son of Frankenstein, among others.

For a third go-round monster movie, Son of Frankenstein by and large has first-rate performances; Basil Rathbone is admirable but obsessive as Baron Wolf von Frankenstein, Bela Lugosi is creepy and tragic as the hunchbacked, deformed Ygor, Lionel Atwill gives a measured, somewhat sympathetic performance as the village Inspector Krogh, assigned to investigate and protect the Frankensteins, and of course Boris Karloff is a sensitive but menacing monster, in his final turn as the legendary character.  When we first encounter said brute (well into the film), he's comatose and once again mute.

It was good to see the filmmakers (minus James Whale who opted not to continue with the series) try something a little different in this film.  The path of least resistance would've been to simply recycle the premise of the first film, and while there is a little of that going on here, overall the story sets itself apart from both Frankenstein and Bride of.  Newly ascended Baron Wolf and his family have traveled to Henry's old castle so Wolf can attempt to redeem his father's name - the village of Frankenstein (not sure when that became a thing) know Henry only as a mad creator of monsters, and Wolf hopes to become a respected statesman.  Along the way he encounters the grotesque Ygor, who reveals that Henry's monster still lives, and he begs Wolf to help him revive his friend.  We later learn that Ygor controls the monster and is motivated by revenge on the village councilors who previously sentenced him to death for grave robbing (Ygor was hanged but somehow survived).  Wolf thinks he can heal the monster and train it to be a civilized man, but of course that doesn't come to fruition.

The execution of this story is done a bit tediously, but I admire the studio's efforts to make the third film stand apart from its two predecessors.  This was the final "A" film in the series before it turned to complete schlock in Ghost of Frankenstein, and there's some dramatic meat here even if it's a bit clunky.

Son of Frankenstein takes some pretty clear visual and plot inspiration from The Cabinet of Dr. Caligari, with its angular, fantastical catwalks and stairways, not to mention the concept of a creature being controlled by someone else as an instrument of murder.  Also the heavy use of shadows projected onto walls brings to mind the great Carl Dreyer film Vampyr.  Kinda hard to go wrong with those two highly influential films driving your visual style.

I like that the monster now has a fur vest over his goofy sports jacket.  This just seems a much more fitting attire for such a primal beast.  I guess the jacket was supposed to be symbolic of Frankenstein's initial effort to civilize the monster, but to me it always seemed out of place.  Too bad the fur was never brought back in subsequent films.

Yeah, so this movie's got some definite pros, but also some cons....


Drywall on the Set

I mentioned this earlier, and while I admire the use of shadows to add to the sinister mood, I think the art directors went a little too far in flattening every wall on nearly every set.  It makes the sets look like they're on a theater stage instead of in a big-budget Hollywood production.  Lighting shouldn't be your entire backdrop guys.  What happened to all the gothic stone and brick from the first two films?  The laboratory especially looks totally chintzy because of this effect.

Jeezus, where is Peter von Frankenstein supposed to be from?  He sounds like Jodie Foster in Nell: "Da monsa donna come inna my room, missa chickapee...."  This has to be one of the most annoying child actor performances ever filmed.  Was he literally the best kid they could find for this role?  Or, a better question: Was it really necessary for Wolf and his wife to have a kid in this movie?  He's a really superfluous character without an arc.

The first Frankenstein film was a lean 71 minutes.  The second was 75.  Son of Frankenstein is 99 minutes - by far the longest in the franchise, and there's really no need for it to be this elongated.  There really isn't enough happening to warrant such a protracted running time.  We don't even get to Wolf's discovery of the monster until a solid half-hour in, and he's comatose for a considerable amount of time thereafter.  I appreciate the world-building they put into this movie but the pace really needed quickening in the first act.  Maybe trim a good 10-15 minutes.

Not Much to the Story

Along those same lines, the story itself is just very repetitious before the final act.  Once Wolf discovers Ygor, the lab, and the monster the film settles into "Wolf works on the monster, the village council bitches about Frankenstein, Krogh comes to the house to ask questions, repeat..."  There's seriously a good half-hour or more devoted to this chain of events.  Finally once the monster is fully revived we get to the Caligari-type stuff, but up until then the story is a bit of a chore to sit through.  How many scenes of these dippy, panicked villagers do we need?

-The laboratory looks exactly nothing like it did in the previous films (Nor does the house for that matter - maybe Henry moved at some point over the last thirty years?) and is now right next to the house.  And it's also just above an open sulfur pit (I smell a plot device).  Oh, and it has a secret passage to Henry's tomb.  Oh, and structurally it's only slightly fucked up even though in Bride the entire building came crumbling down in an explosion and there was zero left of it.  Evidently this film was made before continuity was invented.


-Mrs. Frankenstein is quite a blabbermouth.  Krogh shows up at one point (One of the 17 visits he makes to the house in this movie - jeezus he's around a lot) and she just casually lets it slip that Wolf is doing some weirdo science stuff in his dad's lab.  Way to be discreet, dear.

-In Bride of Frankenstein the roles of the Burgomeister and Maria's dad were recast with completely different-looking actors.  But in this movie the original two actors play members of the village council.  Were those two guys not available for Bride?  And why were they brought back for this one?

-The secret door in the lab that leads to that tomb is comprised of giant slabs of rock and no normal human would ever be able to open the damn thing.  Get the fuck real.

-They just had to shoehorn "It's alive!" into another Frankenstein movie, didn't they?  When the monster is finally up and about, Wolf says the tagline and it feels even more forced than Henry's exaggeratedly elated "She's alive! ALIVE!!" comment in Bride.  Plus we already know he's alive, Captain Obvious, he's been alive this whole goddamn film!  "HE'S FLAT-HEADED!"

-Wolf is a pretty terrible liar.  Whenever he's asked about his experiments or the murders he stammers like an imbecile.  Your testimony ain't gonna hold up in court, Monster Boy.

Well, it's certainly no Bride of Frankenstein, nor is it even in the same league as the original.  But Son of Frankenstein does have some pretty neat things about it, mostly in terms of the visuals.  It's stylish, surrealistic, and for the most part avoids the corniness that would soon envelop these films.  The filmmakers really attempted to take the story in a different direction, and while the results were mixed, it was fun to pick up the saga thirty-odd years after the events of Bride.  The structure of this film also made up much of the blueprint for Mel Brooks' vaunted spoof Young Frankenstein 35 years later.  Son of Frankenstein ain't no classic, but it's not too shabby either.


That'll do it for this ASM.  Comment below with your thoughts!  Click HERE for Ghost of Frankenstein!

Posted by Justin Enuffa Ballard at 8:45 AM