Welcome to another edition of Wrestling Do-Overs, where I'll examine a famous (or infamous) event or angle from pro wrestling's rich history and reimagine it as I would've executed it, thereby demonstrating that a) I should be booking this stuff, and b) I should immediately seek psychological help. 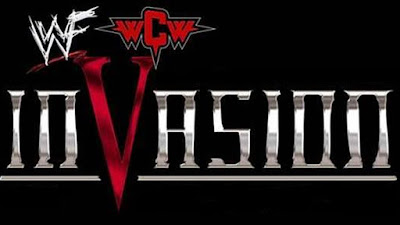 Today I'll be talking about the 2001 Invasion - the fallout of the WWF's purchase of WCW.  As we all know this disappointing angle was a trainwreck from the start and Vince McMahon threw away tens of millions of dollars just to satisfy his own ego and present WCW as a vastly inferior organization/product.  After about five months of excruciating storylines the whole angle was prematurely nixed at Survivor Series 2001 and things went back to normal the next night.

Modern North American wrestling had seen two major invasion angles prior to this one.  One of them (the NWA's purchase of UWF) was an utter disaster and its architect Jim Crockett sold his own company to Ted Turner less than a year later.  The other (obviously the nWo) was a monumental success, at least for a little while, and made WCW the biggest wrestling company in the world.  Vince unfortunately modeled his Invasion angle after the former.

But what could the WWF have done to make the Invasion the record-breaking all-time classic it should've been?  I'm going to create an alternate reality where the WWF didn't horribly botch potentially the biggest money-making storyline of all time.  This will be a multi-part column covering a full year: March 26, 2001 (the date of the final episode of Monday Nitro) through March 18, 2002 (the RAW after WrestleMania X8).

Vince's first mistake was refusing to hire the handful of remaining top WCW stars because they were still under contract to Time Warner and buying them out supposedly would've cost too much money.  But the ratings and PPV buys yielded by such signings would've easily offset these costs and more.  Really Vince could have hired just five additional people, for a total of probably $15 million, and this angle immediately would've been a massive hit with almost no effort required.

With these five names they could earn back that $15 mil in probably two months:

Four of these five men would end up signing with the WWF within two years anyway.  Hell, Flair redebuted with the WWF the night after the Invasion ended!

So here's how things should've kicked off.  On March 26, 2001 the final Nitro aired, and at its conclusion Shane McMahon showed up to announce he had bought the company out from under his father.  This is all wrong.  The McMahons' egos were so out of control they actually believed they and their family squabbles were bigger draws than the wrestlers themselves.  It obviously got worse that summer when they put Stephanie in charge of the ECW squad, and then in 2003 the PPV calendar was littered with McMahon in-ring appearances.  So this whole saga got off on the wrong foot, turning WWF vs. WCW into little more than a convoluted Vince vs. Shane feud.  Anyone who thinks Vince vs. Shane was really what the fans wanted to see is not being honest with themselves.

The man fans really wanted to see mix it up with Vince was a fella by the name of Eric Bischoff.  Vince and Eric had real-life animosity, and ever since 1998 when Bischoff issued a public challenge to fight Vince, fans had been intrigued by the potential matchup.


So in my alternate, vastly improved universe the final Nitro ends with Eric Bischoff coming out to the ring and announcing that he made Turner a better offer at the last minute, and that he is now the sole owner of WCW.  This would have been HUGE.  Imagine the man who nearly ran the WWF out of business now having full control over WCW and announcing, "Since Ted sold me his wrestling company and we no longer have a television show, I guess we'll just have to come and take yours!"  Nitro goes off the air, and Vince goes off the rails.  Just this one change would've immediately set the tone properly; WCW, led by Vince's real-life archenemy, hell-bent on avenging their loss in the Monday Night War, declares their intention to invade RAW and take over the show.  There would've been a real sense of urgency permeating the entire product.

Instead we got Vince's son (obviously not estranged in real-life) being put in charge of WCW and trying to establish it as a separate brand that would co-exist with the WWF, and be featured in sanctioned matches on RAW (why onscreen-Vince would ever allow that is beyond me).  Where's the conflict?

Given that this card was finalized before the WCW purchase there's no reason to go back and significantly change it (WM17 is damn near perfect anyway so why would you?).  However I would change two things.

First, they kept showing the WCW midcard guys sitting in a skybox watching the show.  Again, why would you establish the premise that the WCW roster are your invited guests if the whole endgame is to create an attempted takeover?  It makes no sense.  In my version instead of this hokum, we see handheld exterior shots of Bischoff and a host of second-tier WCW wrestlers attempting to gain access to the Astrodome.  They run into security and Bischoff goes off on a megalomaniacal rant about how WCW is here and they're putting Vince on notice, etc.  It would certainly be more interesting than shots of a couple dozen WCW midcarders sitting comfortably in a luxury box watching the event.

The other change would be similar to what Steve Austin himself has suggested - after accepting Vince's help in beating The Rock for the WWF Title, Austin shakes Vince's hand.....and then stuns the bejeezus out of him.


Now look, I'm not one of these guys who thought the Austin heel turn of 2001 was the biggest financial disaster in the history of the universe.  In fact for the most part I loved the villainous Steve Austin.  His babyface act had gotten very stale and by late 1999 you could tell he was kinda going through the motions.  Turning Austin heel reinvigorated him and led to some of his best work, both in the ring and on the mic.  However, financially it did hurt the company, and making him the leader of the Invasion simply made no sense.  Why would this guy who became a household name in the WWF suddenly want to destroy the WWF?

Instead Austin ultimately rejects Vince and adopts the attitude of a man who will do whatever it takes to win.  The fans still cheer him (as they continued to do until about two months into his heel turn) and 'Mania 17 ends with Austin standing tall over The Rock and Vince, as the Texas crowd rabidly cheer his reascension to the Championship.

Posted by Justin Enuffa Ballard at 9:35 AM