This column features some of the greatest and grossest dive bars in the U.S. of A. I’ll be using a 5-category rating system between 1 and 4 handlebar mustaches, which is the preferred mustache by 9 out of 10 old timers in dive bars. 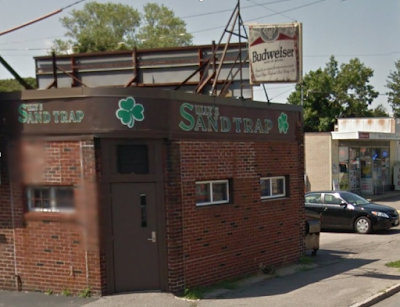 Holy SHIT what a fantastic dive this place is. Sully’s is a legit box. You walk in, there’s a bar, there’s NO SEATS and then some booths. It’s a square room to get hammered in. there’s like two windows, but they’re pointless, as the neon Budweiser signs block all natural light that may enter this hole. This should be the picture in the dictionary for a dive bar. It’s marvelous in its simplicity. Let’s get right to it.

Drinking is fun. And that’s all ya got here. There’s a table with a cribbage board built into it, but they lost the pieces years ago. So if you don’t wanna have fun drinking, then this isn’t the place for you. But if hurting your liver with insane amounts of alcohol is cool, COME ON DOWN

ONE OUT OF FOUR

That’s all this place has. I walked in there with my friend (and fellow Enuffa contributor) Scotty Pickles and we got the eyeballs. The “Who the fuck are these homos?” eyeballs. But once they threw out some racial slurs and we didn’t call the police, we were cool with them. These dudes all knew each other and didn’t give a shit who was there and listening to their antiquated views on society and its peoples. It was a pleasure.

Bud or Bud Light. Oh and Yuengling. And that was about it. Seriously. And don’t even think about ordering some sort of mixed drink. The bottles behind the stick look like they haven’t been touched since the late Jurassic.


ONE OUT OF FOUR

Surprisingly for a place so obviously devoid of any type of cleaning fluids, the place didn’t smell terrible. They had a spread of food laid out that they offered to us which had a bit of an odor. They said it was corned beef, but I’m pretty sure it was just rancid bologna sandwiches left out in the bar for a few days. You’d be crazy to have even touched the food, nevermind eat it.  They weren’t that bad.

This is not a bar. This is prison cell with liquor. You don’t go here after a hard day’s work to unwind with a coupla pals and bitch about the spreadsheet life. No one leaves a job to go here. This IS their job. The sole purpose of this place is to exist so that these lifetime alcoholics have a spot to slow down their shaky hands with the sweet, sweet boozy medicine. I for one am glad I found the place, and look forward to many more years of having my prescription filled here.