Last week was an unfortunate delivery for the NXT product, and I had speculated that this was a precursor to a new style of NXT show. Fortunately, I have been proven partially wrong. While there is a definite focus on being a travelling brand and the weekly show being used to promote and encourage going to the live shows, the quality this week was a great improvement over last week’s show.

Samoa Joe came out to talk about his newly won title.  “Ladies and Gentlemen, what stands before you is a man that keeps his word.”  He went on about how he beat Finn and was going to be dominant. For those of you who are curious, Joe will have to make it to February 8th, 2017 to break Finn Balor’s record for the longest NXT title reign. But as Samoa Joe was talking, Eric Young came out to a huge reaction. There had been news on WWE’s Twitter and Facebook about Young’s signing, but this still came off as a great surprise for the old TNA fan in me. Eric gave the basic “I want the title” speech, with Joe brushing him off, and walking out of the ring. We would see these two in the main event later tonight.


Nia Jax defeated Tessa Blanchard in a squash that lasted less than 3 minutes. If the name sounds familiar, it’s because she is the daughter of the WWE Hall of Famer and former Horseman Tully Blanchard. Nothing much to say as Tessa got zero offense and Nia eventually ended the match with a leg drop. 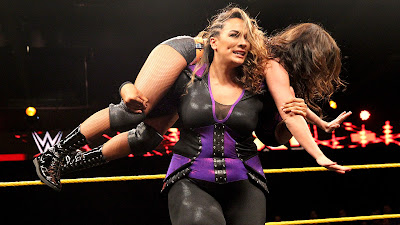 * for a match to show that Nia can kill. And with this next generation of women still getting their stuff together, the women’s division will likely be this way for a long time.


No Way Jose wrestles tonight. Hopefully we see more of what he can do.


Austin Aries defeated Tye Dillenger in what was Aries’ first really good match in NXT so far. AA is finally getting to show that smoothness and natural talent he’s known for, and having Tye as a dance partner certainly helped. Dillenger is a really good talent, but unfortunately his incredibly over gimmick is the result of the Full Sail crowd willing to be into any gimmick put in front of him. This is why I’m critical about No Way Jose, and am constantly weary of anyone brought up from NXT. The highlight of Dillenger’s offense was when he used Hirooki Goto’s Ushigoroshi, which made me smile a bit inside. But Austin Aries eventually won with a 450 splash from the top rope. 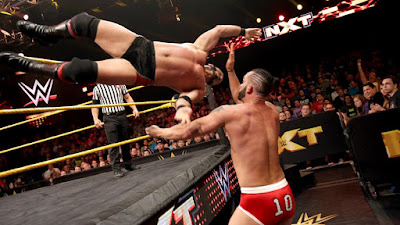 **1/2 for a really solid match that was just long enough and got the point across.


The Revival defeated the Hype Bros, who chose to sponsor Ecto Cooler in this match with beige and neon green gear. Almost the entirety of the match was spent with the Revival beating down Ryder, before Rawley made the hot tag. Unfortunately, Mojo was caught with the Shatter Machine approximately 20 seconds later for the pin. They’re setting up for a title rematch between Revival and American Alphas, and the Hype Bros. can return to spinning their wheels.

**1/4 for a match establishing that the Revival still has momentum and a chance to take back the titles.


Alex Riley is interviewed by a suit and we’re told he faces Nakamura next week. Riley vows he’s gonna beat on Nakamura. I laughed.


No Way Jose beat Noah Kekoa in a quick match that honestly made Jose look a lot better than his match from two weeks ago. I am now a little more confident that Jose is, in fact, a decent wrestler who is able to work with and around the gimmick. Match ended with a Rainmaker buildup, into a full nelson slam.

*1/4 for another squash match that attempted to establish Jose. It’s slowly accomplishing that goal.


Austin Aries was congratulated backstage on his victory, and he talked about how it was the start of his climb to the top. He had a banana and said he had to go eat it. I don’t know why, but AA made it work.


Samoa Joe beat Eric Young in a match that I don’t believe ever happened in TNA. Even if it had, I could guarantee this was one of their better encounters. I do believe, however, that the wrestlers that they bring in from the independents should be kept away from each other on NXT TV. While it makes for good events, they could be used to work with some of the homebrew talent from the Performance Center. I still claim that Eric Young has one of the most beautiful elbows in the United States. But alas, Samoa Joe eventually hit the Muscle Buster, locked in the Coquina Clutch, and Eric tapped. 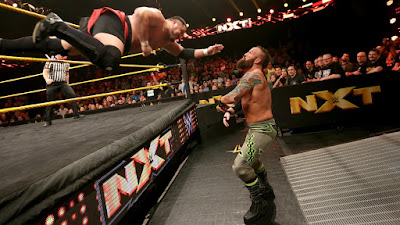 *** for a really good main event. We leave tonight with no real number one contender for the NXT title. Hopefully next week we will get a true contender announced, or at least a contender’s match set up.


Overall the show was an improvement from the past two weeks. Next week is looking to be good, with Alex Riley vs. Shinsuke Nakamura, and hopefully an Asuka match, if patterns continue.