Before the show even opened properly, there was a hype video for the Bayley/Nia Jax match happening later tonight. I love the videos and the production on the NXT show. Whoever’s got the reins is doing their job really well.


Shinsuke Nakamura and Ausin Aries defeated Blake and Murphy, disappointing me solely because I was really hoping for this to be Bobby Roode as the mystery partner for A Double. I’m not 100% sure, but I think that Shinsuke has come out each week with a different top to the ring. I think this was the official start of Blake and Murphy falling apart as a unit. Hopefully it’ll bring both guys into singles careers where they can develop proper characters that they didn’t have as a team. Even at their hottest, when they stole the titles from the Lucha Dragons at the start of last year. Murphy spent the entire match in the ring, eating almost nothing but offense, before eating Nakamura’s knee. 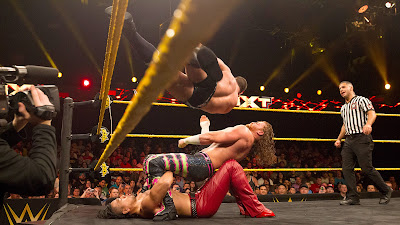 **, for the express reason it started the Blake and Murphy breakup, hopefully, and planted seeds for a potential Aries/Nakamura feud.


Bayley was interviewed, talking about how she’s gonna beat Nia Jax tonight and continue on to regiain the NXT Women’s championship. Match should be really good later, going off of Takeover: London.

No Way Jose gave another promo about who he is and why he’s here, how he likes smiling and dancing. It was goofy, but it wasn’t bad really. Something about his delivery or his disposition just makes me like him when he’s talking.

Carmella was on screen. She wants the belt. She wrestles next.


Carmella defeated Peyton Royce, in the FOURTH woman’s squash in a row on the NXT program. The only difference is that Peyton got a bit more offense than the others have recently, by grace of being heel and needing the heat. Carmella throws, I’m not exaggerating, the worst punches in the company at this time. Which is a shame because she has athletic moments that show talent in other places. Carmella eventually won with her not Koji Clutch.

3/4* for a really not good match. Filled time, waiting for when the new generation of women finally start getting wins.


They showed a recap of the fight between Finn and Samoa Joe in Portland that cleared out the locker room to separate them. So of course Finn dove on all the heels that were holding Joe back. Then they signed a Steel Cage match for June 8th between the champion and former champ. Finn and Joe signed the contract before Joe walked out and had the following exchange.

They hyped up Nia Jax vs Bayley again, really pushing this to be the rematch of the century.

Bliss officially walked away from Blake and Murphy. Maybe the two aren’t breaking up right away, but hopefully by July they will be done.


Johnny Gargano and Tommaso Ciampa defeated Danny Burch and Rob Ryzin, who has a name that has to be a rib on HHH. Further research told me it was not, in fact, given to him. Rob has had this name before, which baffles me in its coincidence. The two losing men are seemingly not going to be a recurring tag team if their gear is any tell. All four men looked good in the match, but it eventually ended when Ryzin was hit with a superkick/knee to the back of the head combination.

**1/4 for a good match that was more competitive than most.


Regal announces American Alpha vs. The Revival for the June 8th Takeover. Going to be a great match on an already good looking card.


Nia Jax defeated Bayley in a great match that showed that Nia is really improving and learning what she’s doing. Either her or someone in her ear knows how to portray a monster heel, and she’s steadily improving with her demeanor and moves in the ring. They played the same kind of match that was given to us at Takeover: London, with Bayley trying everything she can to take the monster down, able to eventually take her off her feet a few times with high flying moves. Eventually, Bayley looked to have tweaked her left knee, and Jax took advantage of it, dropping the leg onto Bayley’s leg and dropping it again across the back of the former champ’s neck. 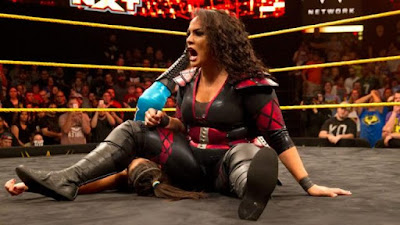 ***1/2 for a great, great match. The best match I’ve seen on NXT since I started covering it weekly. Supposedly this means we’re going to have Asuka vs. Nia at Takeover to round out the title matches on the card.


Really good NXT this week. The usual jobs were either prolonged, less one sided, or had great stories intertwined to make them at worst watchable.