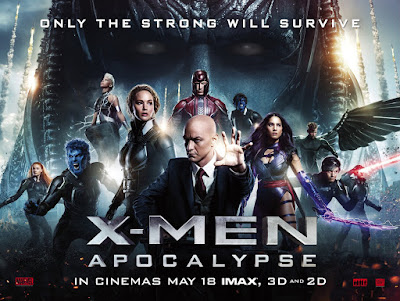 As a huge fan of the X-Men movie franchise I'd placed the latest installment X-Men: Apocalypse very high on my list of Most Anticipated Films of 2016.  I was rather disheartened to learn of its mixed-at-best reception and feared yet another underwhelming third act in a beloved trilogy (In this case, my second favorite superhero movie series behind The Dark Knight Trilogy).  But while it has its flaws and is certainly the weakest of the X-Men prequels, Apocalypse does boast some series-defining moments, mostly strong performances, and a helluva villain.  Fear not friends, it's no Days of Future Past, but it's also no The Last Stand.

As I said, I've been hooked on this series since Bryan Singer ushered in the modern era of comic book films with his understated 2000 original, and the series has had highs and lows (mostly highs) since then.  For me the heart of the X-Men mythos has always been the uneasy relationship between Professor X and Magneto.  I find their Martin Luther King vs. Malcolm X-inspired association fascinating; I'm always drawn in by the idea of two characters with great mutual respect and admiration being separated by a difference in ideology.  Aside from Batman vs. The Joker, this is my favorite comic book pairing.

I was therefore blown away by the first of the X-Men prequels, First Class, as it was the first of the series to be free of the "Wolverine is the most popular so it should all be about him" mentality.  The Xavier-Magneto struggle was front-and-center, and the result was for me the best film in the entire saga.  Days of Future Past spotlighted these two characters as well, and even managed to find room for the aforementioned Wolverine (who was a childhood favorite but isn't terribly interesting or important to me as an adult).  This prequel series has been overall superior to the originals; an impressive feat, particularly given how awful a certain other series of prequels was....
Anywho, back to X-Men: Apocalypse.  As a teenager Apocalypse was my favorite of the X-Men villains.  The all-powerful, ancient Egyptian was totally compelling to me and I've been waiting over two decades to see a cinematic version of the character.  Well sir, in terms of Oscar Isaac's portrayal I was not disappointed.  Isaac brings a stoic, somber menace to a character who could easily have been overplayed.  Given how frankly absurd the concept of Apocalypse is, a muted performance was clearly the way to go, and Isaac once again proves here what a versatile actor he is.  It's also remarkable how much he's able to convey and emote from within the mountain of makeup and prosthetics under which he's been buried.  X-Men: Apocalypse was going to stand or fall primarily based on the strength of the title character, and fortunately he's on solid ground. 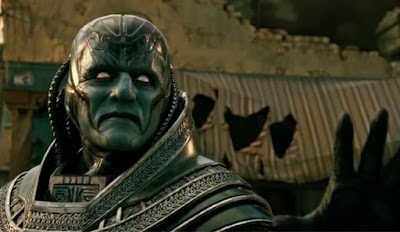 No complaints either about the returning James McAvoy and Michael Fassbender as the Professor and Magneto; these two know their respective characters inside and out, and both build on the excellent foundation they've already established.  Evan Peters also returns in another near show-stealer as Quicksilver, who continues to be the most purely fun character in the series.  Minor standouts include Kodi Smit-McPhee as Nightcrawler (via Alan Cummings' 2003 version), Alexandra Shipp as the morally ambiguous young version of Storm (Unlike Halle Berry, Shipp actually pulls off Storm's accent), and Tye Sheridan as a young Cyclops.  All three characters get some nice moments and should be assets to the franchise going forward, assuming more films are made.

I wish I could say the news were all good.  Two key performances that felt exceedingly flat to me were Sophie Turner as the young Jean Grey, who recites her lines with almost no emotion, as though she lost a bet, and most shockingly disappointing, Jennifer Lawrence as Mystique.  Aside from Magneto and Xavier, Mystique is probably my favorite character in the entire franchise.  From Rebecca Romijn's mostly silent but undeniably gripping portrayal to Lawrence's more introspective turns in First Class and DOFP, Mystique has been established as a forlorn, conflicted figure, seething with resentment at a hateful, intolerant world in which she never feels at home.  But in this movie Lawrence often seems like she'd rather be anywhere else.  Her performance isn't bad per se, but it lacks the grit and palpable emotion of her previous two attempts.  Considering how strongly the character has been portrayed up to this point, this felt like a letdown.

The movie also suffers from simply having too much going on and trying to be too big for its own good.  The X-Men movies have always been rather intimate, small-scale films compared to their superhero brethren; they've centered around the characters' interpersonal relationships and ideas moreso than over-the-top action spectacle.  Apocalypse sadly veers a little far into the latter and thus slightly betrays the spirit of the series.  Don't get me wrong, the action set pieces here are mostly first-rate.  Bryan Singer has a knack for staging action scenes in a way that makes them memorable and unique.  Plus there are a few emotionally charged, chill-inducing moments so good they allowed me to overlook the film's flaws and enjoy what was there rather than focus on what wasn't.  But overall the numerous story threads didn't come together nearly as well as in First Class and DOFP.  Often the editing felt choppy, as though Bryan Singer intended this to be a much longer film.  I can only hope Fox will release an extended cut.

In addition to the overloaded story there were multiple times when a line of dialogue was absolutely cringe-worthy and very clearly needed a rewrite.  A couple examples (I won't mention who says them so as to avoid spoilers):

"Whoever you are, you're not going to stop me from killing these men."  On paper this doesn't read that bad, but in the context of the scene it just sounds clunky and awkward, like it was written for a radio show.

"He felt you'd make a difference in the world.  Maybe even change it."  Wait, what??  Aren't those the same thing?

Previous X-Men films have had snippets of poorly written dialogue, but for some reason they stuck out to me more in this film.

Lastly, one unfortunate side effect of this prequel trilogy is that certain things don't add up in terms of the timeline.  Scott and Alex Summers are brothers, but Alex was first introduced as a teenager in First Class, set in 1962.  Twenty years later, Scott is roughly the same age Alex was in FC.  Are we to believe their parents went two decades between siblings?  Stranger things have happened I suppose, but I found myself very distracted trying to reconcile this.  Also no one seems to have aged much since 1973.  Magneto looks exactly the same age (Couldn't they have grayed Fassbender's hair a little?), Xavier maybe looks five years older, and with Alex Summers they made no effort to age him at all.  These are minor nitpicks but they make it harder to stay absorbed in what's happening on the screen.

So the question is, did I like X-Men Apocalypse?  Overall yes.  The characters kept me engaged, Oscar Isaac did justice to this iconic villain, multiple sequences drew me in emotionally, and while the globe-threatening comic book destruction has been done to death, in this film it didn't feel excessive or impossible to follow - the action sequences were exhilarating instead of tiresome.  But the film would've been improved by either a tighter script or a less truncated edit (Granted, at 145 minutes that's an unwieldy proposition).    It just didn't have the narrative punch of First Class or DOFP.  As I said, I'd love for there to be a Director's Cut, which would perhaps allow the story to flow along better.

So the bottom line is: it's not the best entry in the X-Men series but it's also far from the worst.