This column features some of the greatest and grossest dive bars in the U.S. of A. I’ll be using a 5-category rating system between 1 and 4 handlebar mustaches, which is the preferred mustache by 9 out of 10 old timers in dive bars. 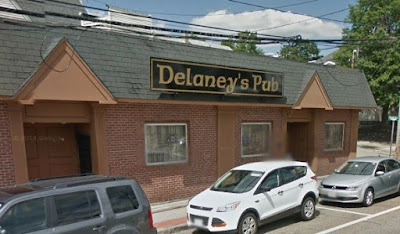 Delaney’s is a vile bar with filth covering it and disgusting people going in and out of it all day. Let’s get this over with.


FUN FACTOR: Do you like hepatitis? Fleas? Zika virus? If those things are your idea of a good time, run, don’t walk to Delaney’s. The place is most likely covered in all those, along with some heretofor unknown diseases. So head there now if you wanna end up with a jolly old case of Brainpox.


CAST OF REGULARS: All this place has is regulars. And they’re as disgusting as the beer that flows from the taps here. Also, despite the fact that it’s illegal to do so in the state of Massachusetts, EVERYONE smokes in here. It’s ridiculous. I walked in there thinking I was smoking. I still haven’t been able to get the crusty smell of Madge’s Marlboros off my jacket.


BEER CHOICES: Whatever you do, order a bottle from here. The dust in this place had dirt in it. The cleanest thing in this place was the urinal. If you’re drinking a draft beer in this place, good luck getting home, because the bacteria from these draft lines is 100% gonna make you go blind. I’d rather be dead than drink a draft from this joint. And I don’t even think it was beer they were pouring. That was the natural color of their putrid water. If you had a choice between a Bud draft from Delaney’s or drinking whatever is left at the bottom of monkey cage, take a glass over to Koko’s place and bottoms up.


STENCH: The one category this place excelled in was unpleasantness in the nostrils. The smell of mold and failure wafts all over this hellhole of sadness. You can clearly smell disappointment when you’re within 25 feet of the place. Funeral homes in August with no air conditioning smell better than this slime hole.

OVERALL: Fucking terrible. I legit felt sick in this place. My head hurt, my body ached all over and I got Newports burned into my arm because Ol’ Gus passed out on me. Seriously one of the worst, most objectionable drinking establishments I’ve ever had the misfortune of venturing into. I’d rather use my toothbrush to scrub Chris Christie clean after a marathon in hundred-degree weather than head to this place again. I guess technically the place gets one mustache because of its monkey butt like stench, but make no mistake: don’t go here. Ever. Hopefully the place collapses under the weight of its own repulsiveness.  May God have mercy on its soul.

Posted by Justin Enuffa Ballard at 9:46 AM