Welcome to another edition of Top Ten Things, here at Enuffa.com!  Pretty self-explanatory - ten things at the top of what-have-you.

Today it's the top ten matches from that beloved bygone decade known as the 1980s!  I hopped on the pro wrestling bandwagon in the latter part of the decade and therefore this list skews heavily during that time.  I've seen plenty of the early 80s stuff, but I think most would agree the overall wrestling product in North America was stronger from '86-'89 than it was from '80-'85.  Cases in point are my ten picks.  Granted, my own personal nostalgia for those formative years may have played a part, but what the hell d'ya want from me? 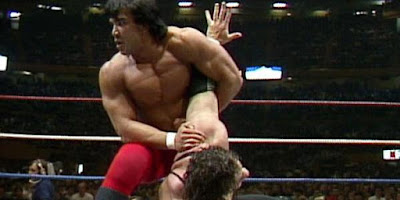 This forgotten gem was preserved for us all when Bret Hart included it on his DVD set in 2005, but I'd seen it before then.  Initially this match was to be the prototype for a WrestleMania 2 rematch, before Vince changed his mind and threw Bret and Neidhart in the WWF vs. NFL Battle Royal, and put the rising babyface Steamboat against the larger Hercules.  But this match upstaged literally everything at 'Mania 2, as these two technicians put on a veritable clinic.  This is one of the earliest WWF examples of just how good Bret was as a singles wrestler, and despite the lack of company followup it's easy to see why Bret looks back on this bout fondly. 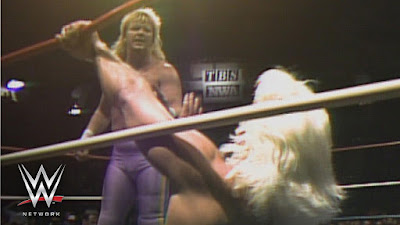 The Christmas-themed Season's Beatings edition of Clash of the Champions was headlined by a huge tag match, as NWA Champion Flair and US Champ Windham (the only remaining Four Horsemen after Anderson & Blanchard left for Stamford) faced former NWA Tag Champs the Midnight Express, who'd recently turned babyface before being mauled by the heel Road Warriors for the straps.  This Clash special was mostly centered around hype for the upcoming Starrcade '88 PPV, and all four participants here were pretty well-protected.  Bobby Eaton & Stan Lane dominated much of this fast-paced bout before getting screwed at the last minute when Flair waffled Bobby with JJ Dillon's shoe.  Another forgotten classic, this is easily one of my favorite Clash bouts of all time. 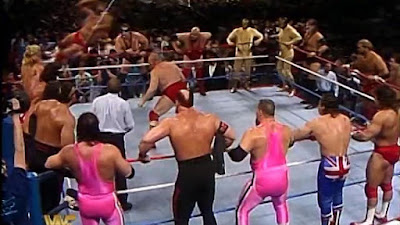 Speaking of favorites, this entry is my favorite Survivor Series elimination match, which happens to be from my favorite Survivor Series PPV.  The late 80s tag division in the WWF was the stuff of legend, and this match assembled all nine of the company's regular teams (plus The Conquistadors) for an epic 40-minute war.  WWF newcomers The Powers of Pain captained an absolutely stacked team of the Hart Foundation, British Bulldogs, Rockers, and Young Stallions, against Demolition's squad of Anderson & Blanchard, The Rougeaus, The Bolsheviks, and the aforementioned masked jobbers.  The action in this match was non-stop for almost the entire duration, until late in the bout Demolition's manager Mr. Fuji turned on them and helped the Powers of Pain take the match.  This was in my experience the first-ever double-turn, and it broke my 13-year-old brain. 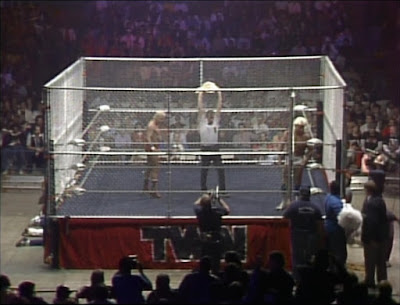 Starrcade '87 was built around Ric Flair's quest to regain the NWA Title.  The Board of Directors wanted Flair to drop the belt to someone a few months earlier and win it back at Starrcade, I guess hoping to recreate the magic of SC'83.  The problem was, no one wanted to be a two-month lame duck Champion, and the only babyface who agreed to it was perennial midcarder Ronnie Garvin (who was a fine worker but no credible World Champion).  Garvin won the Title in a cage match that September and then announced he wouldn't be defending it until Starrcade.  Not much of a story for a PPV main event, but the match itself was pretty goddamn good.  Flair and Garvin beat the bejeezus out of each other, engaging in a war of chops and Figure Fours, and frequently using the cage as a weapon.  After 17 minutes Flair caught Garvin off the ropes and hotshotted him into the cage (in one of the least painful looking spots ever), and cradled him for the win and his fifth NWA Title.  Lame ending aside this was a pretty great match. 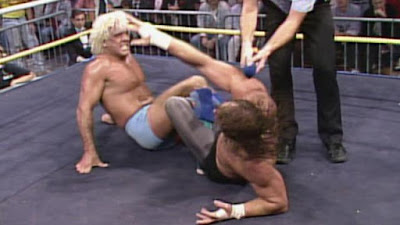 The best feud of 1989 culminated in this outrageously violent I Quit match at New York Knockout.  Flair and Funk had battled for four months in various singles and tag matches, and this was the big blowoff.  The match raged all around ringside using tables and chairs galore, and included one of the most innovative spots I'd ever seen at the time.  Flair grabbed Funk by the head and sent him sliding across a slanted table, head-first into a waiting chair.  This bout was way ahead of its time and paved the way for the ECW bouts of the 90s. 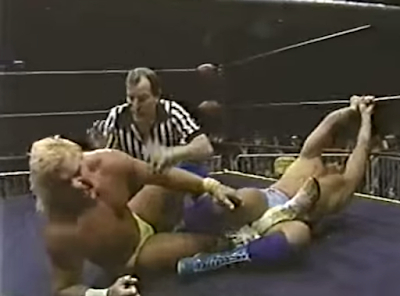 Quick confession: I've never seen the uncut 35-minute version of this match.  The VHS version of this two-night event was hacked to ribbons (as were many Turner Home Video releases), and thus far the WWE Network hasn't released uncut versions of the three Crockett Cup tournaments (Get on it Vince!).  Thus the only version of this match I've been able to view was abridged to 16 minutes, but I'll be goddamned if it isn't one of the best matches of 1987, even in this form.  Flair-Windham was a spectacular feud and this is their greatest match together that I've seen.  Flair has always said Windham was one of the few opponents that could keep up with him hold-for-hold and cardio-wise, and it's a shame Barry didn't have the drive his colleague did or he'd have been a cornerstone of the NWA for years.  If anyone knows where I can find the 35-minute version, please comment below! 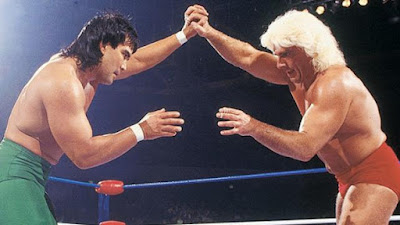 Flair and Steamboat were tailor-made for each other, and this match kicked off their 1989 trilogy of in-ring masterpieces.  For 23 minutes these two artists exchanged some of the best holds and counterholds ever seen in a North American wrestling ring, and when it was all over Ricky Steamboat had pinned the "Nature Boy" with an inside cradle to become the NWA World Champion.  Absolutely superb, but they weren't done yet. This non-title match opened SummerSlam '89, as the two best teams in the company put on an absolute clinic.  The Harts dominated much of the action with loads of innovative tandem moves, and the exchanges were fast and crisp.  Tag Champs Anderson & Blanchard had already settled right into their new surroundings and took the WWF tag division by storm, and they meshed incredibly well with Bret and Neidhart.  The finish came when Anderson, the non-legal man, axehandled Bret off the top rope with the referee distracted, and then pinned Bret while covering his own head with Bret's hand.  Not sure why this never turned into a full-length feud, but this match is an absolute classic. 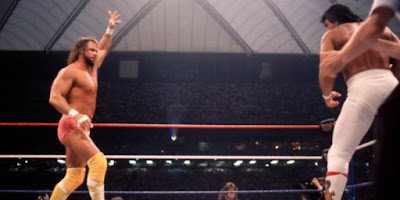 The 1980s prototype for the modern WWF/E-style five-star match, Savage vs. Steamboat is one of those near-perfect bouts that has stood the test of time.  Where 80s WWF was known as The Land of the Giants, these two agile, medium-size grapplers tore the house down in a match that was painstakingly rehearsed (something Savage used to insist on).  The reversals and near-falls were frequent and mindblowing, and after a ref bump and an assist from George "The Animal" Steele, Steamboat countered a bodyslam into a small package for the win. 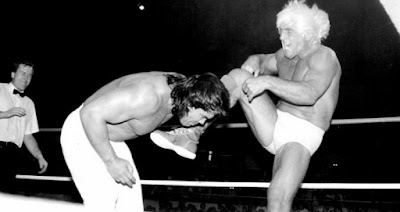 Probably the best pure wrestling match of the decade, Flair-Steamboat III headlined WrestleWar and brought this incredible trilogy to a close.  I'm not sure what it is about this match that made it better than its two predecessors, but somehow everything just clicked in this one.  For 33 minutes the two masters played a game of human chess and wove together an absolutely captivating in-ring tale.  In the end Flair countered a Steamboat bodyslam with a cradle (echoing Steamboat's win over Savage) to recapture the NWA Title and blow off one of the greatest wrestling feuds of all time.  Nothing in 1989 could touch the excellence of Flair vs. Steamboat.


That's my list of the greatest matches of the 1980s.  Did I miss any of your favorites?  Comment below, and check out my Greatest Matches of the 1990s piece!


Posted by Justin Enuffa Ballard at 8:50 AM