Welcome to another edition of Awesomely Shitty Movies, here at Enuffa.com!  For those just joining us in progress, ASM is a regular feature where I pick apart a film that neither qualifies as a particularly good film nor as a piece of junk.  Every movie spotlighted in this column is something I either enjoy despite itself, or a movie that could be really good if the filmmakers just got out of their own way.

Today's ASM is the 1996 Michael Bay action vehicle, The Rock, starring Nicolas Cage, Sean Connery and Ed Harris.  The Rock tells the story of a former US General who hijacks Alcatraz Island, taking 80 civilians hostage, and threatens to launch a poison gas missile into San Francisco if his demands aren't met.  The US Government, not wanting to negotiate, sends in a team of Navy Seals, plus a former Alcatraz inmate who knows how to enter the prison undetected, and a chemical weapons expert to disarm the missiles.  As expected, things don't quite go according to plan and all hell breaks loose in the prison. 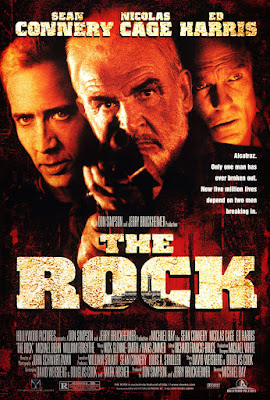 The Rock really begins and ends with its three lead actors.

Nicolas Cage is spot-on as Stanley Goodspeed, the everyman type who's been thrust into an extraordinary situation and repeatedly survives by the skin of his teeth.  He is our eyes and ears throughout the story, keeping his head down during the intense action and letting the more experienced military characters do the heavy lifting while he concentrates on disarming missiles.  The fact that he has a pregnant girlfriend waiting for him at home adds consequence and sympathy to his plight; we reaaaallly hope he gets out of this alive.

Sean Connery as John Mason essentially plays an older James Bond type - a grizzled SAS veteran brought in to show the Navy Seals how to get in and out of the prison.  When we first meet him, Mason has been imprisoned by the US Government for 30 years without being charged, for refusing to divulge classified information.  During the ensuing combat, Mason is always in control of the situation and never gets rattled.  He forms an unlikely bond with Goodspeed and more or less guides/protects him (and us) through the action.  Mason initially wants to run once the shit hits the fan, but Goodspeed reminds him that his daughter would be within the blast radius if the bad guys launch their missiles.  So he has to juggle helping Goodspeed while also planning his escape at the end.
Ed Harris steals the show as the film's villain, General Hummel.  Hummel operates out of a desire to see justice done and feels horribly betrayed by a government that sent him and his men on covert missions and failed to properly compensate/honor them and their families.  Despite taking hostages and threatening the entire city with annihilation, Harris is able to make us sympathize with his character, creating one of the most fascinating types of villains in my opinion: the villain you don't want to agree with, but whom you know is kinda right.

All three leads are more than capable actors who play to their strengths and bring life to characters that might just as easily have been assembly line cardboard cutouts.

The Rock has a ton of action and some pretty grizzly moments, but it's also peppered with enough humor to keep the film exhilarating rather than tiresome.  Cage and Connery in particular have great chemistry and play well off each other - Cage is the uptight, reluctant hero, and Connery is the jaded warrior.

The prison at Alcatraz has a mythic quality about it, so setting any kind of action movie there automatically adds atmosphere.  Granted, almost none of the scenes set in the prison were actually filmed there, but Alcatraz brings a certain sense of danger to the story.

The characters in this movie could've simply been archetypes of good and evil.  Hummel could've been written as a sadistic, warmongering asshole who just wanted to hurt people.  Mason could've been written as a perfectly decent man who happened to be in the wrong place at the wrong time.  Goodspeed could've been played by Arnold Schwarzenegger (in fact Arnold was offered the role but turned it down) and been written as a nigh-invincible action hero who's never in any real peril.  But all three characters have a bit of depth and dimension - Hummel is an honorable man who has simply been pushed too far.  Mason is a cold-blooded killer we aren't sure we like at first.  Goodspeed is a rather timid know-it-all with an odd penchant for not swearing (a nice touch actually), for whom killing is very uncomfortable, even in self-defense.  For these reasons we're drawn in by these people and have an emotional stake in the story's resolution.

He's got a small, uncredited part, but I've always liked Stuart Wilson.  He was a solid bad guy in Lethal Weapon 3, an even better bad guy in The Mask of Zorro, and he turned in a great performance opposite Sigourney Weaver in Death and The Maiden.  His appearance in this film, while brief, adds gravitas and believability to an expository scene so we pay attention to what's happening.

He also has a small part, but I've always liked Michael Biehn even more.  How this guy didn't become a big action star after The Terminator and Aliens I'll never know.  Biehn makes a totally convincing vulnerable hero, a la Bruce Willis, and was also a superbly creepy bad guy in The Abyss.  When he showed up in The Rock I was super excited to finally see him in a big movie again, even if he doesn't have much screen time.  Biehn also got one of the most quotable bits of dialogue: "I shit you not!"

Pretty much every mid-90s action movie followed the template created in the late 80s with films like Die Hard and Lethal Weapon.  Lots of illogical shoot-em-up scenes, unlikely hand-to-hand fighting, and plenty of disposable characters on both sides getting offed unceremoniously.  The Rock is no different in this respect; the action scenes tend to be a bit of a bore as we wait for the story to advance.

As with most action films, some of the dialogue in The Rock is pretty godawful.  Sure there are some nice little speeches by Hummel, and most of the script is perfectly serviceable, but some of the one-liners are cringe-worthy.  For every "How....in the name of Zeus's BUTTHOLE.....DID YOU GET OUT OF YOUR CELL??" there's a "Well Womack, you're stuck between The Rock, and a hard case."  Positively groan-inducing.  Another example: when Mason infiltrates the prison and lets the Navy Seals in he says "Welcome to The Rock," which was clearly inserted as a soundbite for the trailer.

I'm sure John Spencer is a perfectly fine actor, but I found his presence in this movie horribly grating at every turn.  His only real function seems to be to explain to the audience, in a clunkily-written scene with Philip Baker Hall, a little about Mason to build up to his first appearance.  And then later he has a similar scene with William Forsythe explaining why Mason's been imprisoned for thirty years.  Spencer's delivery is so heavy-handed it felt like he was trying to steal the movie, except the Womack character isn't at all interesting.

The Rock is Michael Bay's best film by far, and yet it still qualifies as an Awesomely Shitty Movie.  If that's not an indictment I dunno what is.  Par for the course, The Rock looks and sounds like a music video rather than a movie.  Basically not one set looks like a real place.  There's a dreadfully obvious air of artificiality to every backdrop that yanked me out of the story and constantly made me aware I was watching a movie.  Ya know how in "Making Of" documentaries it's jarring how fake all the sets look from the documentary footage, as opposed to the edited 35mm film?  That's kinda how every Michael Bay movie looks to me as a finished product - the lighting is flagrantly engineered, the sets look shabbily fabricated, I just never feel like his films fully let you in as a viewer.  He seems to like keeping his audience at arms length.  Fortunately The Rock was made prior to Bay's discovery of seizure-inducing, rapid-fire cuts and massive-scale, city-wide destruction (That didn't really start until Armageddon) spanning 150+ minutes.  So at least this film isn't exhausting to sit through.

-Lemme get this straight, VX is the deadliest gas ever invented, right?  Even one drop of it could kill everyone in the room.  Why then, in the name of fuck, do they package it in these fragile little glass balls haphazardly daisy-chained together, rather than say IN A METAL CANISTER??  And how'd they get it inside the glass balls??


-What kinda bush-league interrogation room has a one-way mirror so thin the glass can be cut open using a jagged quarter?

-Um, there's tunnels under Alcatraz?  Since fuckin' when?

-I like how Mason escaped through the furnace by memorizing the timing of the deadly flames shooting everywhere - so apparently he's Super Mario?  Also, what kinda furnace shoots different combinations of flames every few seconds, and how has the sequence never changed in four decades?

-The scene where the Navy Seals come up through the shower room and are ambushed by Hummel's men devolves into a shouting match that's so over-the-top it's unintentionally funny.  Hummel insists that Anderson (Michael Biehn) order his men to stand down and Anderson refuses, and it plays out like so:

The whole scene becomes silly instead of suspenseful.  Take it down a notch, fellas.

-At one point Goodspeed and Mason get captured and thrown in two of the unoccupied cells, and Mason figures out a way to escape by tying a weight to a makeshift rope that he swings back and forth until it lands on the door release lever.  Only problem is the lever is probably thirty feet away and he'd never have room to swing the rope with that large a radius.

-Since the main villain Gen. Hummel is actually not a bad person, and in the end doesn't go through with his threat of killing the entire city, the screenwriters had to make two of his lieutenants bloodthirsty assholes who DO try to kill everyone once it's clear they aren't getting a ransom.  I guess they needed a big climax to the film, but it just seems odd that Hummel would hire these two jackoffs for such a dangerous and illegal mission if he didn't fully trust them.

The Rock is your classic guilty pleasure kinda film.  Full of dumb action but with interesting enough characters and plot devices that it's actually memorable and doesn't totally fall apart on a second viewing.  In the hands of a more artistic director like John McTiernan this could've probably become one of the great action movies of the era, instead of a movie that defied its propensity for suckage.  Along with Face/Off, The Rock was one of Nicolas Cage's last films as an A-lister, and probably Sean Connery's last really successful starring role.


That'll do it for this installment of ASM.  Check back for more unnecessary film dissection here at Enuffa.com!


Posted by Justin Enuffa Ballard at 8:59 AM