Elimination Chamber Is the Best WWE PPV So Far in 2015

What's up gang?  Just wanted to share a few thoughts about the Elimination Chamber PPV we all watched last night. 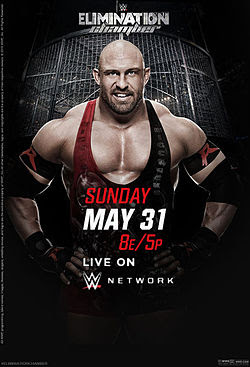 First off, I really enjoyed this show.  There wasn't a bad match on the card and the two big singles matches delivered huge.  For a show thrown together in the span of two weeks, WWE did a tremendous job of making it feel important and assembling a strong, entertaining card.

The Tag Chamber was a really fun way to kick things off.  There are few things in wrestling that warm my heart quite like the sight of a full-fledged tag team division.  While not every team on the roster has a direction right now, just the fact that there are enough viable duos to fill a Chamber brings to mind the wonderful tag divisions of the late 80s.  Five of the six teams got at least a few moments to shine (Los Matadores kinda got the shaft, but El Torito got some highspots in), and The Ascension looked better than they ever have.  Cesaro/Kidd of course did the lion's share of the work to hold the match together, and I was a little disappointed they weren't in the final segment with The New Day.  But make no mistake, this was enjoyable from start to finish while also making the Tag Titles seem important.  The New Day continues to be one of the best acts on the show these days.  What a difference two months has made for them. 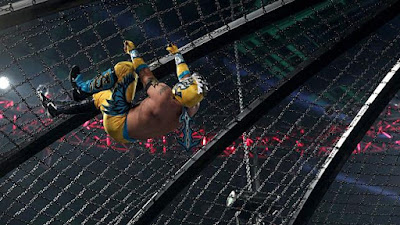 The Divas Triple Threat was the usual throwaway women's match.  All three worked hard as always, but there's only so much one can do with seven minutes.  Perhaps someday we'll finally get the women's wrestling we deserve on a main roster PPV.  It's definitely time to call up Charlotte to challenge Nikki.

John Cena vs. Kevin Owens was pretty great.  Owens came off like a major deal and this was full of excellent false finishes and innovative offense.  I had forgotten how good Owens is at top rope moves.  I also liked the teased Package Piledriver, even though he modified it into a suplex-type move.  Cena brought it as always and made Owens look great.  The only thing missing from this match was a little bit of chemistry that comes from two guys wrestling each other repeatedly.  But we'll probably already start to see that in the rematch at MITB.  Owens going over clean was amazing, and the announcers treated it as a monumental upset.  This is how you build a new star.  I fear Cena will get his win back in two weeks, but if so, hopefully they'll book it in a way where Owens won't seem any less special.  Helluva good match, probably in the 3.75-4 star range. 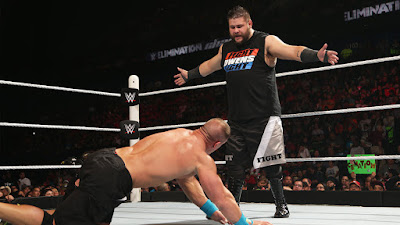 Neville vs. Dallas was fine.  Little more than a showcase for Neville, and I would've liked more offense from him.  Dallas needed to be built up a little prior to this so the ending wouldn't have been so telegraphed.

The IC Chamber was a bit disappointing, but still not bad.  I've read reviews calling it horrible, which I think is a little harsh.  It was a bit on the awkward side and the lethargic crowd kinda hurt it.  Ziggler was blatantly yelling out spots (particularly when wrestling Ryback), which I found very distracting.  I'm not sure what that was about, as I've never noticed him doing that before.  Maybe he was resentful over Ryback being booked to win?  I dunno.  Ryback's win will hopefully elevate both him and the Title.  He has a host of upper midcard heels he can face.

Seth Rollins vs. Dean Ambrose was flat-out awesome.  I absolutely loved the chain wrestling at the beginning (Ambrose needs to do more of this stuff), and these two have such amazing chemistry and clearly drawn characters I could watch them fight each other all day.  This might be their best singles match to date (rivaled only by the No Holds Barred match from last August).  I was afraid the presence of Kane and J & J would hinder the match, but it was kept to a minimum and Ambrose stayed one step ahead of the heels.  Ambrose's initial win didn't feel like the huge moment it would've been, which indicated that the live crowd didn't buy it as the actual finish, and like me, were waiting for the other shoe to drop.  Usually I hate the Dusty finish, but in this situation I thought it worked perfectly.  Rollins' reaction at the DQ announcement was priceless - just obnoxious levels of relief.  This was a great heelish way for Rollins to retain while keeping Ambrose strong.  Match of the Night as far as I'm concerned. 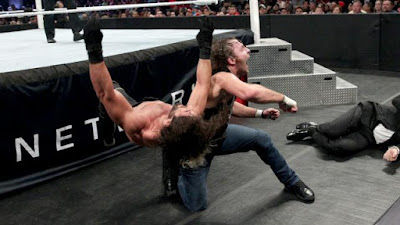 I'm calling it now - Elimination Chamber was easily the best WWE PPV of 2015 thus far.  Yes, I thought this was a superior show to WrestleMania 31.  It featured a fantastic one-two punch, plus a very engaging Tag Chamber.  The NXT brand continues to thrive, on its way to hopefully becoming the template for how to book the main roster shows.  Rollins, Owens and Neville, all former indie stars, had fantastic showings and are being booked strong.

I'd still like to see Rollins go on RAW and swear off all free TV matches.  He could even say, "If you wanna see the WWF Champion wrestle, you're all gonna hafta plunk down your $9.99 and watch me on the Network.  I learned a long time ago that if you're good at something, never do it for free, and I just happen to be the BEST at this job."

So that's where my head's at after the Chamber - kudos to WWE for putting together a damn fine show so quickly.  Hopefully Money in the Bank can continue this sense of urgency in the WWE product.
Posted by Justin Enuffa Ballard at 1:09 PM