Welcome to another edition of Dumb Action Movie Reviews, wherein I, Dan Moore, traverse the cinematic wonderland that is Netflix, Youtube and various other websites looking for crappy action movies. The ratings are based on 1-4 Indiana Jones whips, as he's the premier action movie character ever and the whip is AWESOME. 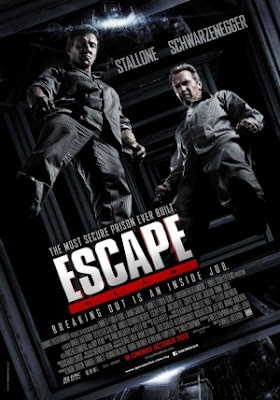 NOTE: THERE WILL BE SPOILERS IN THIS REVIEW BECAUSE THERE HAS TO BE. BUT DONT WORRY, THE SPOILERS ARE POINTLESS, JUST LIKE THE PLOT TWISTS IN THE MOVIE.


Escape Plan is a confusing 2013 action flick based in an inescapable prison starring Rambo and the Terminator as two schmoes trying to get out, along with Jim Caviezel as the warden.
Now listen to me. I wanted to love this movie. Was DYING to love this movie. This features the two biggest action stars EVER. Arnold Schwarzenegger and Sylvester Stallone have given me so many hours of enjoyment over my life I feel I owe them money.  Their action movie resumes cannot be touched.

So finally they're co-starring together in what should be a no brainer of a premise: Stallone is security specialist named Ray Breslin who gets locked up in prisons with the intent to escape from them to report on any weakness in the prison. The CIA recruits him for a brand new prison but this time he and his team can have no knowledge of where this lockup is.  He goes against his own protocols (of course he does, there'd be no movie if he didn't) and gets chucked in the slammer under the alias of Anthony Portos.  But on the way to jail, his captors remove a tracking microchip from his arm, ensuring no one knows where or who he is.

He meets the warden (Caviezel) who is not the warden he expected. When Breslin gives him the evacuation code but is ignored, he knows he's screwed. He's thrown into general population in the joint.

The prison itself is an admittedly cool looking joint. It's all cubes and squares of solid glass with a dreamlike, M.C. Escher quality. The set design is top notch. Breslin meets inmate Emil Rottmayer (Schwarzenegger) who works for a dude named Victor Mannheim. Why is this important? It really fucking isn't, except for some last minute, pointless twist ending wherein (*SPOILER*) it's revealed Rottmayer is Mannheim for...some reason. I have no clue. It makes zero sense.

So skip ahead, skip ahead, they try to escape a few times, they can't, they get thrown in solitary, try to escape again and then HURRAY! They do. Legit, that's the movie. Each action scene is so forgettable as to be laughable. There is literally nothing in this movie action scene-wise that I recall being cool and I just watched this. It's really fucking boring. They add so many needless plots to what should be a straightforward movie: two badasses in a prison try to break out. But instead there's false identities, the warden lying about people for no reason, there's a Muslim inmate subplot that goes nowhere and evidently Breslin's partner is in on sending him to 'The Tomb' for monetary reasons I guess? Not really sure. There's so much going on its ridiculous.

Stallone and Arnie are just...there. Perhaps it's because they're both receiving Social Security at this point but neither of them have any spunk to them in this flick. It may have something to do with the fact that they teamed up 25 years too late for this movie. They're both basically walls in this flick, holding up what little roof the movie has.

The only standout is Jim Cavaziel playing completely against his good natured, nice guy persona as the jerkoff warden. He goes complete heel in this flick. All suited up and acting like a prick. If this were WWE, he'd be Chris Jericho.


Do not waste your time with this movie. The two biggest action stars ever cannot make this turd smell any good. Avoid at all costs.

I rate this film: Half a whip out of four.

Posted by Justin Enuffa Ballard at 10:59 AM