Welcome to another edition of Enuffa.com WWE PPV Predictions!  This month is WWE's annual gimmick PPV Tables, Ladders & Chairs (and apparently Stairs as well).  My associate Dan Moore and I will attempt to prognosticate the outcome. 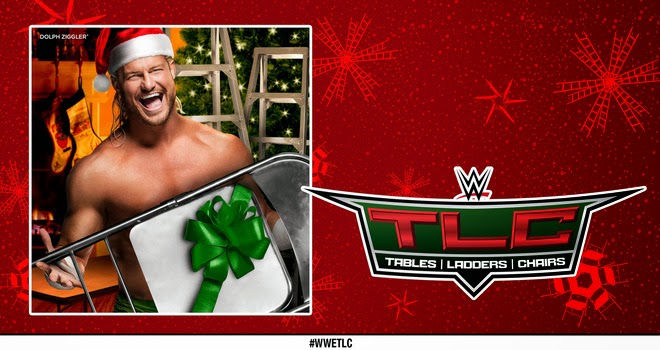 Once again the week-to-week writing has been horribly tedious and devoid of any urgency, as WWE goes through the motions until WrestleMania season starts up.  Survivor Series ended up being pretty good and featured a very fun elimination match as the main event.  Some of the booking was fairly nonsensical (Big Show panicking and switching sides when it was 3-on-3, Sting saving Team Cena at the end and never explaining why), but the match itself felt special and for one night at least, Dolph Ziggler looked like a superstar (as opposed to the rest of the time when he's booked like a Superstar TM - ya know, a second-tier guy who loses all the time).

Despite Series being a fun show, the followup has been predictably dreadful.  Ziggler is back to feuding over the worthless I-C Title (If you need convincing of how devalued that belt is, ask yourself how many matches Luke Harper has won since becoming champ), every RAW main event is some combination of Cena, Rollins and supporting characters, and ends in a DQ, The Authority has been replaced by a revolving door of guest GMs, which didn't work in 2009 and still doesn't.


On paper though TLC looks watchable.  Once again there's no sign of WWE Champion Brock Lesnar.  Wouldn't want our top champion defending his belt once a month, would we?  Tell me again why Daniel Bryan had to drop the Title when at the time they thought he'd be back by SummerSlam? 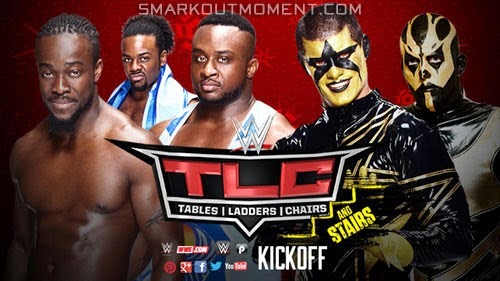 I like the pairing of Kofi and Big E, or as I like to call them, Kof-E Klangston.  I hope they actually get pushed as a formidable team.  That being said I'm puzzled by having their first feud be against the Dusts, who just lost the Tag belts three weeks ago.  Either way a good team's gonna come out of this feud a loser. 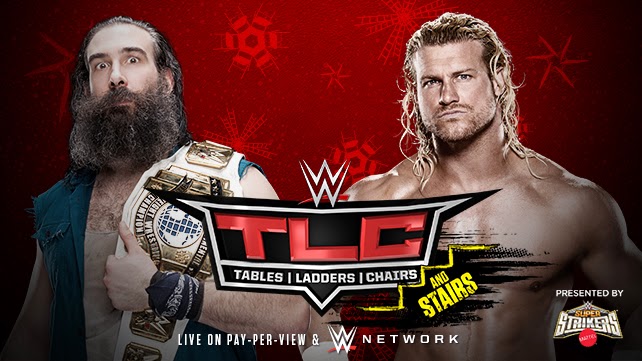 Sigh.....Dolph is already back to challenging for a worthless secondary title, against a guy whose stock has already dropped since winning said belt.  The Ladder Match format should lend itself to Dolph's crazy bumping shenanigans and make this one of the strongest bouts on the card.  Harper's a damn good big man wrestler too.

Justin's pick: Clearly Harper's not losing the belt back already.
Dan's pick: I dunno, do they go with Ziggs momentum to give him the belt back? I doubt it. Harper. 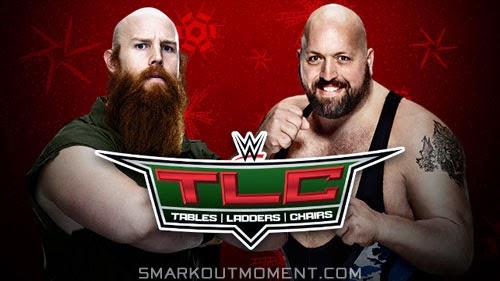 I don't have high hopes for this.  And why do we need a Stairs Match??  The stairs are technically part of the ring and people get rammed into them all the time.  At this rate let's do a Ring Post Match, where the posts can be used as weapons.  Oh wait, that's already legal.  Rowan doesn't impress me thus far as a single, and we've been given no reason to like him as a babyface, since he wasn't given a reason to turn babyface.

Justin's pick: I don't have much emotional stake in this one.  I guess Rowan'll probably win his first PPV singles match.
Dan's pick: I don't care much about this either. Rowan needs the win. 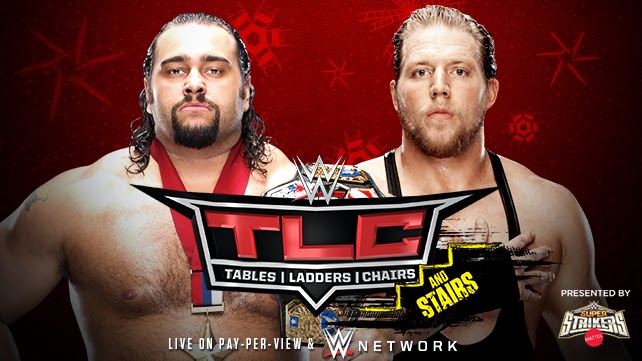 Dude, we just saw this feud like three months ago.  Was no one higher on the food chain available for Rusev?  Christ! 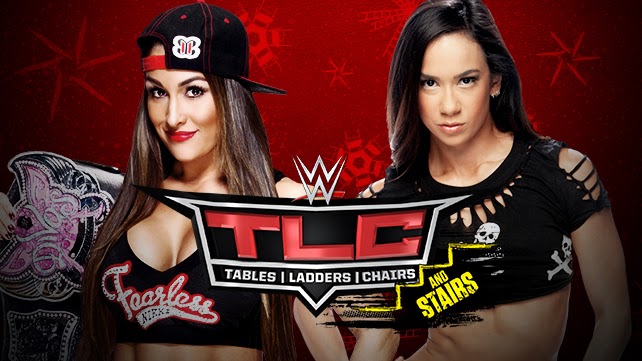 Their Survivor Series match was dumb and made no sense.  Brie is suddenly a heel now who is supportive of Nikki?  When did this happen?  Nice callback to WrestleMania 28 though, recreating one of the stupidest booking decisions the company ever made (you know which one).  Anyway this should be a decent women's match if given time.

Justin's pick: Since the Divas Title has hopped all over the place this year I'll go with the Champ to retain for once.  Nikki wins.
Dan's pick: Nikki 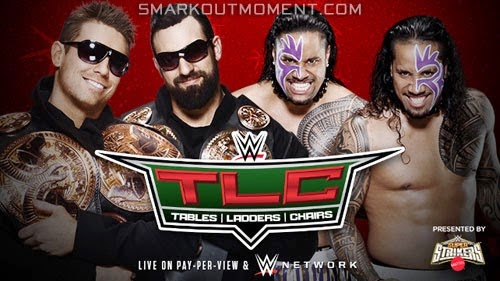 From an in-ring perspective the tag division is pretty consistently one of the bright spots on the card.  Unfortunately we've seen every combination of teams fight each other so many times there's no novelty in any of it.  It's just a bunch of good teams fighting for no reason.  This should be decent though.  Mizdow's shtick is funny and super over.  Clearly he's going to split from Miz at some point, but I don't think it's time yet. 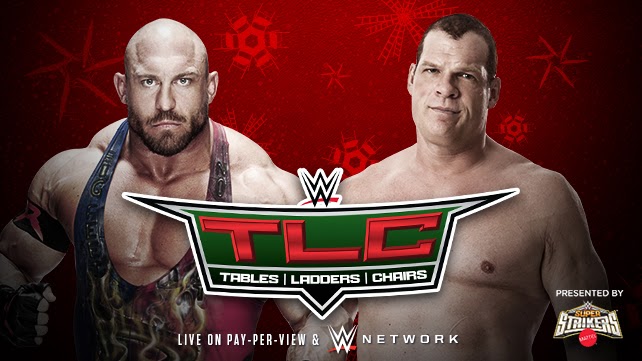 It was very odd to see Ryback the first one eliminated from Team Cena last month, since he was supposed to be such an asset to whatever team he was on.  This is another nondescript brawl I expect very little from.  Maybe Ryback'll throw Kane through a table but miss the table.  And Kane'll say, "Either you did that on purpose or you're dumb as fuck." 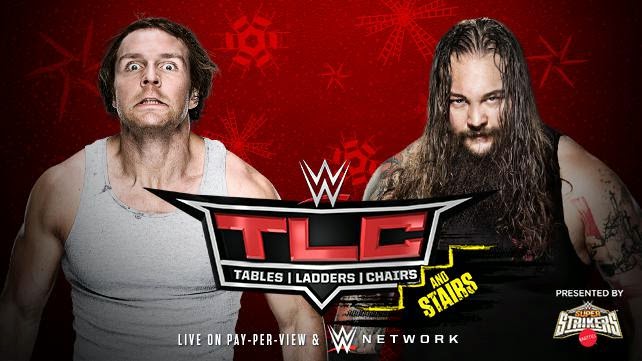 Though their Survivor Series match was fairly underwhelming, this should be a show-stealer.  If it were up to me, this would main event the PPV, since it's the only TLC match on the card.  I said this last month, but I'm not feeling much emotional attachment to this feud because it's just two insane dudes trying to out-crazy each other.  Still it should be a PPV-worthy bout.

Justin's pick: Ambrose desperately needs a win here (as does Wyatt I suppose), and given his recent T-shirt sales the company would be nuts not to push him harder.
Dan's pick: This is getting boring. 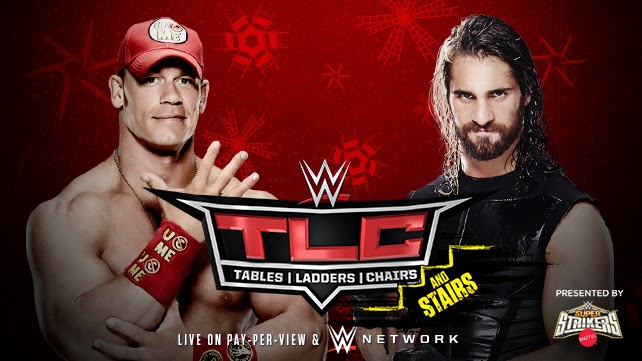 I like this match on paper except for the Tables stipulation.  Tables matches are generally one of the stupider match types - how hard is it really to put someone through a table?  The other stip here is that if Cena loses he's no longer the #1 Contender.  If the company had any brains they'd give Rollins the win here and have a returning Orton challenge Lesnar for the belt in January.  But they're fools, so.....

Justin's pick: Cena wins again and faces Lesnar again.  This Lesnar Title run has been the biggest waste of everyone's time and I don't know what they were thinking.  Why would you not have Lesnar run through a slew of top babyfaces to build to his eventual 'Mania match with Reigns?   Nope, all Cena, all the time.  Jeezus H. Christ.
Dan's pick: What was the point of me being on this article?


And there's our picks for TLC.  Should be yet another decent card with no deeper meaning.
Posted by Justin Enuffa Ballard at 5:00 PM