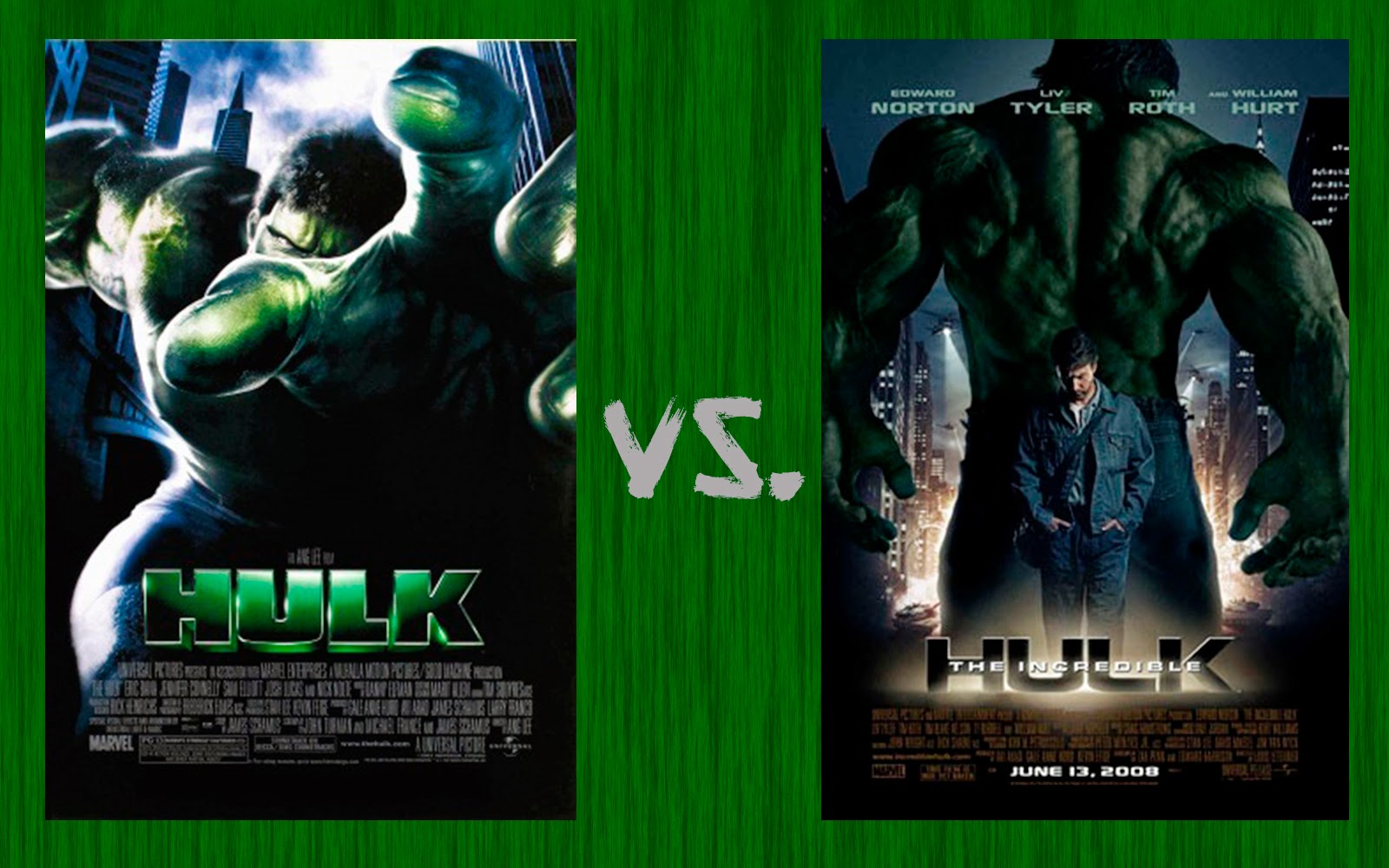 The Incredible Hulk is one of my all-time favorite comic book characters.  He is pure, unbridled rage.  Fury incarnate.  The perfect embodiment of what happens to us all when our emotions become too potent to control.  The meek, intellectual, physically limited Bruce Banner morphs into the mindless, gigantic destroyer known as the Hulk.  Few fictional characters are as universally relatable or recognizable, and this story is a natural for cinematic interpretation.

The late 70s saw a TV version of the character, as Bill Bixby and Lou Ferrigno costarred in The Incredible Hulk series.  The show was very popular but due to technological and budgetary limits it failed to fully capture the spirit of the comic.  Instead of being a giant with unlimited strength and near-invincibility, the Hulk was merely a large, very muscular man with green skin who never spoke and liked to throw people around.  The series was followed by three rather poorly-received TV movie sequels, and it seemed that a theatrical feature film based on the character would never happen.


Finally in 2003, on the heels of the wildly successful Spider-Man film, Ang Lee released a major movie adaptation simply entitled Hulk, starring Eric Bana, Jennifer Connelly, Sam Elliott, and Nick Nolte.  The film took with deadly seriousness the subject matter of a man cursed with  crippling anger issues that trigger his transformation into a rampaging, destructive beast.  Banner's character is presented as the deeply troubled adult child of a megalomaniacal scientist who damages his son both physically and emotionally, making Bruce the worst possible person to be stricken with the Hulk "disease."  Jennifer Connelly as Bruce's love interest Betty has grown up with a similarly unhealthy paternal relationship, as her father is a bullish, powermad US General.  The film becomes a rather profound exploration of these two characters and how they handle their respective childhood traumas (with some smashing thrown in there too).

Unfortunately film audiences in 2003 were expecting a superhero film, and after a very strong first weekend, Hulk tanked at the box office, pulling in only $132 million domestically (not a great haul when your production budget was $137 mil).  The planned sequel to this film was abandoned, and the character's cinematic exploits were temporarily shelved.

By 2008 however, Marvel Comics had launched their own film studio and began the rollout of a whole slew of Marvel Universe-inspired films.  Iron Man led the charge, but soon after came the rebooted The Incredible Hulk, starring Edward Norton, Liv Tyler, William Hurt, and Tim Roth.  This film promised to do away with the heavy-handed psychoanalytical drama of the first film and focus on the Hulk as a reluctant action hero.  Norton's Banner was much more driven by trying to find a cure while controlling his emotional impulses.  The film featured several exciting action set pieces building to a climactic showdown between the Hulk and the Abomination (just like the Hulk except bigger and scaly).  Leading to the film's release there were several rumors of creative clashes between Norton, director Louis Leterrier, and the studio.  Norton and Leterrier wanted the film's running time to be around 135 minutes and feature several character-driven scenes but the studio insisted on keeping it under two hours to maximize per-day screenings, apparently overcompensating for the mainstream failure of Ang Lee's film.

As it turns out the action-oriented Hulk film didn't fare any better at the box office than its character-oriented counterpart.  The Incredible Hulk only grossed two million more domestically than Hulk '03, on an even larger budget ($150 mil).  It seemed audiences were just not that interested in a standalone Hulk movie.  Still the big green guy's involvement in The Avengers four years later seemed to galvanize moviegoers, with many citing Hulk as the show-stealer.  But for now it appears we won't be getting any solo Hulk films.

So which of these movies worked better?  Ang Lee's pensive art-film or Leterrier's fast-paced thrill-ride?  Well let's break it down by category.....

Bruce Banner: Eric Bana vs. Edward Norton - I'm tempted to give the edge to Norton because the casting was so perfect and I'm a huge fan, however Bana's role was written with far more substance and the character arc was an emotional one, rather than Banner just spending the whole movie trying to keep his heart rate down.  Somehow having the transformations triggered by a physical state rather than an emotional one is far less interesting dramatically.  Norton's Banner becomes heroic in the film's third act while Bana's is trying to cleanse himself of a lifetime of emotional turmoil.  Norton was more likable in the role, but Bana was far more intriguing.
Point: Lee

Betty Ross: Jennifer Connelly vs. Liv Tyler - This is not even a contest.  Connelly's performance destroys Tyler's.  Liv Tyler is basically in the movie to look pretty and give Bruce trite encouragement.  Connelly's Betty however is a major part of the story and her damaged upbringing and strained relationship with her father mirrors Bruce's.  Her ability to deal with her own personal issues in a healthy, constructive fashion is a counterpoint to Bruce's self-destructive tendencies.
Point: Lee

General Ross: Sam Elliott vs. William Hurt - Again, a trouncing.  Sam Elliott brings a fleshed-out, three-dimensional sense of believable menace to the character, whereas Hurt is just a comic book villain essentially twisting his mustache the whole movie.  In the scene where Elliott warns Bana to stay away from his daughter, he's actually very intimidating.  Hurt's Ross was little more than a plot device to introduce Tim Roth's Emil Blonsky as super-serum candidate.
Point: Lee

Secondary Villain: Nick Nolte vs. Tim Roth - This one is fairly close, but while Roth did well with what he was given (which honestly isn't much from an acting perspective - some badassery and goofy tough guy dialogue), Nolte really comes off like a dangerous, crazed scientist who is 100% certain he's doing the right thing for himself and his son.  His big political tirade toward the end of the film is over-the-top but completely credible coming from this maniacal character.
Point: Lee

Hulk: Chubby Green Ogre vs. Streamlined MuscleMan - This one's kind of a toss-up.  Conceptually the 2008 Hulk looks better.  He's ripped, really angry-looking, and he's the right size.  However within the context of the movie he looks like a cartoon.  Rhythm & Hues, the effects company that designed him, failed to make him look like a living, breathing character that occupied the same physical space as the live action.  The 2003 Hulk, while a little too Shrek-like and inexplicably 15 feet tall by the end of the movie, actually looks like a real person, albeit a giant green ogre with purple pants.  But when he interacts with the live action it looks seamless.  This stands to reason since he was designed by ILM, the best special effects company in the world.  Overall I give a slight nod to 2003 again because I found the 2008 Hulk's fakeness distracting, even though he looked really cool.
Point: Lee


Action Scenes: 2008 probably wins slightly here because this movie was first and foremost an action film.  The fight with Abomination at the end was much more satisfying than the climactic fight in the 2003 film (which was really more about an emotional resolution), though it went on a bit too long and I was eventually aware I was just watching a videogame fight.
Point: Leterrier

Absorbing Man vs. Abomination - I loved how the Absorbing Man effects were handled in the 2003 movie (the little scene where he discovers his new abilities was chilling) but unfortunately there weren't enough of them.  He's barely onscreen once he gets his powers.  Abomination is given much more to do, but sadly he looks pretty cartoonish and there's nothing of Tim Roth's performance by the end.  I like the Absorbing Man character better (though in the comics it's obviously not supposed to be Bruce's father), so I'll go with 2003 here too, just by a hair.
Point: Lee

Substance - Here's where the 2008 film falls apart.  It's a comic book action movie, nothing more.  There are some really good character-driven deleted scenes that the studio insisted on excising to shorten the running time, which pretty much destroyed any chance this film had of stacking up with the 2003 film or even Iron Man.  The movie just moves from one plot-driven/action scene to the next.  The characters don't feel like real people - they're just there to serve the plot.  Compare that with the 2003 film, where we spend a lot of time delving into Bruce and Betty's respective backgrounds to learn why each of them is so emotionally scarred (him especially), and why Bruce having these Hulk powers is so dangerous.  When he finally snaps and transforms for the first time it feels like his emotional strength has given out and the floodgates have opened.  The scene has real weight to it and the tension is palpable.  Granted Ang Lee really should've edited 10 minutes or so of exposition to get us to the title character sooner (the Hulk doesn't appear until 40 minutes into the movie) but at least by the time he makes his first appearance we're actually given a reason to care about the human characters.  In the 2008 movie Bruce barely has any dialog before he turns the first time.  There's montages of him training to keep his heart rate down and montages of him chatting with Mr. Blue on the computer about finding a cure.   But why should we care about Bruce himself at this point?  That's always been a flaw of the comic - that Hulk is awesome but Bruce is a wet blanket.  In the 2003 movie he's fleshed out into a real character before we ever see Hulk and we actually care about him and Betty.
Point: Lee

Where the 2008 movie set out to just be a successful action film (which it wasn't - it made even less than the Lee version after adjusting for inflation), the 2003 film took the material seriously as drama and tried to advance the superhero movie into something more.  Obviously the Norton Hulk was much closer to what 2003 audiences were expecting, and had it been released then it likely would've been a hit.  But by 2008 the boat had kind of already sailed on dumbed-down superhero fare.  Remember, this was post-Sin City, Batman Begins, Iron Man, and even Spider-Man 2 (and The Dark Knight was about to blow everyone's freakin' mind).  Audiences had been conditioned to expect a bit more of a comic book movie than just wall-to-wall action.  Norton and Leterrier had created the potential for a nice middle ground between character study and popcorn movie, but studio meddling resulted in a film that offers little beyond some exciting one-viewing action scenes.  Hell, the Ang Lee version might've been more successful in 2008, when emotionally heavy, artful superhero films were in fashion.  In 2003 everyone expected another Spider-Man but with a big green monster.  By 2008 the genre had been elevated to include profound dramatic material.


So the upshot is, while both films have their flaws, Ang Lee's art-film pounds the tar out of Louis Leterrier's run-of-the-mill action vehicle.  Don't believe me?  Watch 'em both again.  Care to discuss?  Sound off in the Comments section below.

Posted by Justin Enuffa Ballard at 9:42 AM