Money in the Bank Predictions!!

Welcome everyone to another edition of WWE PPV predictions.  Today we'll cover this Sunday's Money in the Bank PPV. 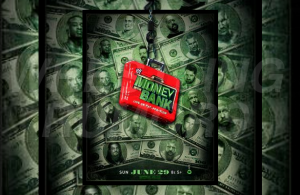 I'm gonna start by saying how disappointing the overall direction of WWE has been since WrestleMania and the night after.  As of April 7th it really felt like the whole company was gearing up for the future, pushing new stars, keeping things simple, and presenting fresh, compelling storylines.  It appeared we'd see a massive spring/summer feud of The Authority vs. Daniel Bryan & The Shield.  Inexplicably the company decided to take the weakest member of Triple H's faction, the exceedingly damaged 47-year-old Kane, and have him feud with the hottest star and WWE Champion Daniel Bryan.  They had one good match at Extreme Rules but the feud itself was asinine.

Then everything got royally screwed up when Bryan unexpectedly had to get neck surgery, which has forced him to the sidelines indefinitely, sadly resulting in his being stripped of the WWE Title.  Worse timing in wrestling I cannot remember.  This would be like Austin getting the infamous Owen Hart tombstone a month after winning the WWF Title at WrestleMania XIV.  It really just sucks.