Guest Column: I Love You, Pro Wrestling - by Jim Fitch

Editor's Note: I made friends with a couple of dudes over a decade ago that were probably as serious about this silly fake fighting stuff as I was, and definitely as analytical.  Each of them has achieved great success in their respective fields (much more than I have in mine, I assure you), and the fact that I personally know two such highly intelligent fellas who are as passionate about pro wrestling as myself is a testament to how far-reaching this "male soap opera" really is.  Tonight's guest column is from one of these guys, Jim Fitch, a Senior Legal Writer with Thomson Reuters.  In the coming weeks I'll be posting some discussions with Jim about various aspects of the wrestling industry, but for now I'll let him have the floor, so to speak.  Enjoy!

There are seven stages of grief, supposedly.  For a wrestling fan of my vintage (I am 44 now), there were really just three stages of development for want of a better word, and for me none of them contained grief at all.


Stage two was the mandatory spiritual defrocking of the man behind the curtain (literally, as it turned out), for me I guess an extension of stage one.  In my case, three things happened that comprised stage two.  I’m happy to relate them all, in no particular order (as I don’t remember the order).

I remember sitting on my couch, watching Greg Valentine squash “Silent” Brian MacNee on Maple Leaf Wrestling.  Earlier in the show, Jake Roberts had won a squash match of his own: let’s pretend he creamed Johnny K-9 for the sake of the narrative.  So I says to myself I says, “wouldn’t it be cool if ‘The Hammer’ and ‘The Snake’ fought EACH OTHER on my Saturday morning TV instead?  They’re way better wrestlers than those bums they just killed …. wait a second.  Oh (heck) – those bums aren’t even trying hard!  They’re just there to make me want to see Hammer and Jake fight for money!  That way they won’t get hurt much on TV, and they’ll be fresh for the (shoot I guess) money fight.  Awesome!”. 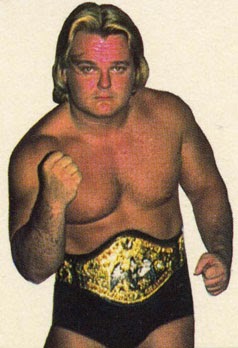 The second stage two moment was kind of a simple one: I won a pool at my high school among my wrestling fan buddies, predicting not only that Randy “Macho Man” Savage would win the WWF title tournament at Wrestlemania IV, but that he would beat “The Million Dollar Man” Ted DiBiase to win it, and multiple details of how that would occur.  I was lucky, I guess – or maybe I had just been observant?  Either way, I was almost 25 bucks richer.

The stage two event that really sticks out for me was the only time that real grief may have entered the process.  I loved Bill Apter.  I still do.  When Mr. Ballard of this site asked me who in all of pro wrestling, ever, I could be, it took me no time at all to answer.  I wish I was Bill Apter.  Justin picked Chris Jericho, and our friend Travis chose Mike Chioda.  As an aside I think that says a lot about each of us.  In any event, I was nose-deep in an Apter mag, and YAY a Playmate-of-the-Month style profile of NWA World Champion, “Nature Boy” Ric Flair!  Just like a Hef piece, it did some version of “turn-ons and turn-offs”.  The first Flair turn-on was “private jets” – Whooo!  I don’t remember the others, but you can likely guess a couple of good candidates.  Here comes the grief – the first “turn-off” was “wrestling fans”.  What?  Dude, Flair’s not an idiot – we PAY for those jets, don’t we?  He can’t really hate me, at least not more than anything else, it just doesn’t make sense.  It just doesn’t make sense.  Dammit – this wasn’t a real interview.  Dammit dammit dammit my magazine is crap.  I guess, dammit, maybe wrestling is, too?

So, then – stage three.  The best stage.  The obvious stage.  Unification.  The bad guy wins, then the good guy wins.  They beat up bums to get us to watch the good fights.  If one pays attention, one can figure out who will win a big tournament.  The bad guy champion only pretends to hate his meal ticket.